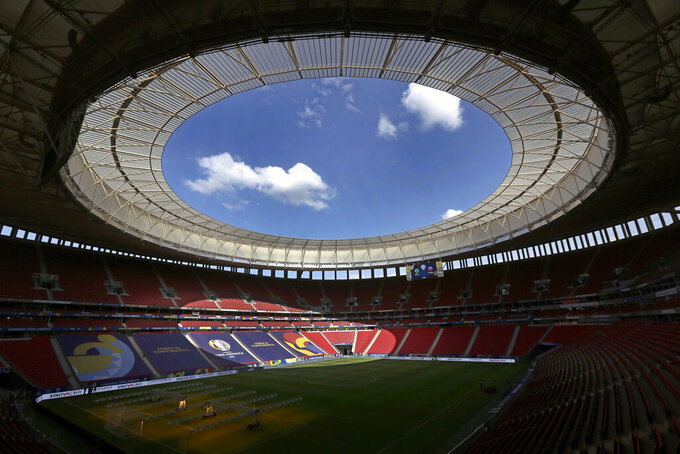 SAO PAULO (AP) — Copa America has yet to kick off, but 11 players have tested positive for COVID-19 upon arriving in Brazil. Eight are Venezuelans and three Bolivians, soccer bodies of the two countries said on Saturday.

Venezuela, which plays the opener of the tournament on Sunday against the hosts, has summoned 15 new players for its squad. Three members of its coaching staff were also infected.

Its football federation said in a statement that all "are ready to join our group in Brazil later today.” Those infected were not named.

Later the Bolivian Football Federation said three players and one member of its coaching staff tested positive. It added all its infected personnel are in good health and isolated.

Bolivia's first match in the tournament will be on Monday against Paraguay.

South American soccer body CONMEBOL stressed in a statement that “the matches will be played as scheduled.”

Brazil health minister Marcelo Queiroga said Venezuela players who have the virus will return only after they test negative. He said there’s no reason for the Brazil match not to take place on Sunday.

“There will be no going and coming of players. Players who tested positive will quarantine,” Queiroga said. “If we had no possibility of positive cases we wouldn’t need rigorous protocols. Venezuela is lucky that they will bring other athletes.”

Venezuela was allowed to make vast squad changes because CONMEBOL changed the limit of five substitutions due to COVID-19 in the final list sent by teams.

Coach José Peseiro said his preparation for the match has been affected.

“Today we didn't practice, we were isolated waiting for the tests. Tomorrow we will play with 11 who did not have the time to practice or play together," he said. “I won't have seven players I had in the match against Uruguay."

Venezuela had a 0-0 draw on Tuesday against Uruguay in a World Cup qualifier.

Earlier, the health secretariat of Brazil's Federal District, which includes Brasilia, said 12 infected Venezuelans were isolated in a hotel.

“They are all asymptomatic, isolated in single rooms and are being monitored by the team of CONMEBOL" and local specialists, the statement said.

Venezuela arrived in Brazil early Friday. One day earlier, two players tested positive for COVID-19, Wilker Ángel and Rolf Feltscher. They did not come to Brazil, the emergency host of the tournament after Colombia and Argentina were pulled.

Bolivia's squad arrived on Friday. It was the first of nine foreign teams coming to Brazil for Copa America.

Brazil has the second-most recorded deaths from the coronavirus in the world, more than 480,000. President Jair Bolsonaro, a critic of social distancing policies, is the main advocate for the Copa America, which will have no spectators.