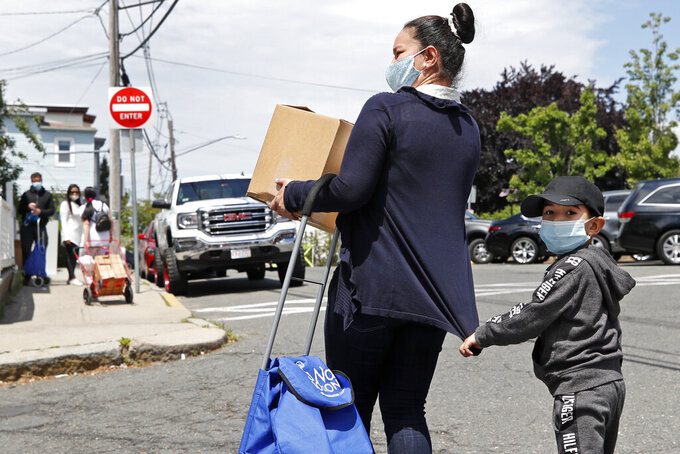 A woman and young boy walk away Tuesday, June 2, 2020 after receiving a box of food at a pop-up pantry in Chelsea, Mass. (AP Photo/Elise Amendola)

BOSTON (AP) — Massachusetts’ highest court on Tuesday denied a bid to immediately release more prisoners due to the coronavirus pandemic.

The Supreme Judicial Court's ruling came in the case brought by Prisoners’ Legal Services seeking to further reduce the number of people behind bars so that those remaining can maintain proper social distancing. The court rejected the group’s request for the immediate release of more prisoners, but sent the case to a lower court for further consideration as an emergency matter.

Elizabeth Matos, executive director of Prisoners’ Legal Services, was disappointed in the ruling, saying she believes there is “plenty of evidence right now to justify releases.”

“Without releases, the dangerous conditions we are seeing now will only escalate,” she said in an emailed statement.

The court did say Tuesday that people who have been civilly committed due to substance use disorder rather than a crime are entitled to new hearings to determine whether they should be freed.

A Supreme Judicial Court ruling in April allowed certain pretrial detainees to seek release due to the pandemic.

Under the new method — which includes probable cases dating back to March 1 — total cases of COVID-19 in Massachusetts have now topped 101,000.

There were 50 new deaths reported Tuesday, bringing the total number of confirmed and probable deaths in the state to 7,085.

Other numbers released Tuesday continued to indicate progress in the battle against the disease.

The number of probable and confirmed COVID-19 deaths at long-term care facilities rose to 4,382, or about 62 percent of all deaths.

Support for state and local governments and extra funding to help stabilize the childcare market are among the priorities U.S. Sen. Elizabeth Warren outlined Tuesday as Congress weighs another coronavirus stimulus package.

Warren said she’s focused on what the nation needs to do to help keep families afloat not just during the pandemic, but through the economic recovery.

Among the steps she said is needed is the creation of an “essential worker’s bill or rights” and $50 billion for the childcare market.

“Childcare is critical infrastructure,” Warren said in a virtual meeting with the New England Council. “Parents can’t go back to work without affordable and reliable childcare.”

The next relief package also needs to include money for mom-and-pop businesses that got squeezed out of earlier relief programs and more resources for testing and contract tracing, Warren said. She is pressing also for a federal contact tracing initiative modeled after the contact tracing program launched in Massachusetts.

The coronavirus pandemic has claimed another Massachusetts tradition.

The 2020 Marshfield Fair scheduled for late August has been canceled for the first time in its 153-year history, The Patriot Ledger of Quincy reported.

“We’re extremely disappointed that this decision had to be made, but we made it taking into consideration the pandemic and the additional cautions that would be required,” said Lenny LaForest, president of the Marshfield Agricultural and Horticultural Society.

The agricultural fair draws farmers and ranchers who show off their brightest flowers, largest vegetables and best-bred livestock for ribbons. The fair also includes entertainment, arts and crafts exhibits, carnival rides and games, and food stalls.

The Hampden County Sheriff’s Office is donating face shields to hair salons and barbershops in the county as they begin to welcome back customers.

“As we work to get back to business during the pandemic, the least we can do is make sure the people providing services to us have the tools they need to safely perform their trade,” Sheriff Nick Cocchi told Masslive.com.

The formal donation is scheduled Wednesday.

The donations will begin in Westfield and expand to other area communities.