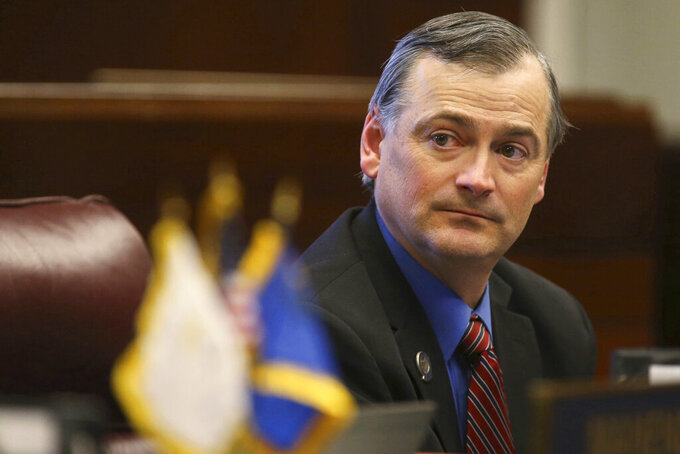 FILE - In this Feb. 27, 2013, file photo, Nevada Sen. James Settelmeyer, R-Minden, listens on the Senate floor at the Legislative Building in Carson City, Nev. Nevada state lawmakers are bound by a state constitutional requirement to reach a two-thirds majority to approve revenue-generating decisions, the state Supreme Court decided Thursday, May 13, 2021. In a decision with more than $100 million in implications for lawmakers now in session and counting on the taxes and fees in question to balance the state budget, the seven justices sided unanimously with Republican state lawmakers and rejected arguments by Democrats. Settelmeyer accused Nevada Democrat leaders of knowingly violating the Nevada Constitution in 2019. (AP Photo/Cathleen Allison, File)

In a decision with more than $100 million in implications for lawmakers now in session, the seven justices sided unanimously with Republican state lawmakers and rejected arguments by Democrats.

The court declared the “plain language of the supermajority provision” requires more than a simple majority to extend existing revenue sources. In 2019, legislative attorneys advised Democratic leaders that they could prolong two revenue streams with simple majority votes — a Department of Motor Vehicles transaction fee and a payroll tax.

Since 1996, the Nevada Constitution has required two-thirds of lawmakers in both chambers to approve any measure that “creates, generates, or increases any public revenue in any form.”

“Because the (DMV and payroll tax) bills did not pass by a two-thirds majority in the Senate, those portions of the bills that would require a supermajority vote are unconstitutional,” the court said.

The justices also concluded that individual Democratic legislative leaders were not personally liable for costs in the court case “because the actions they performed were within the sphere of legitimate legislative activity.”

Nevada Gov. Steve Sisolak, a Democrat, issued a statement promising to “work with legislative leadership on budget implications” of the decision. He said state officials “will analyze the decision to determine next steps.”

In a statement on behalf of Senate Republicans, Minority Leader James Settelmeyer accused Nevada Democratic leaders of knowingly violating the Nevada Constitution in 2019.

“This is a victory for all Nevadans. We should remember it was the voters who placed the two-thirds requirement in the state constitution, and that provision is now guaranteed,” he said.

Settelmeyer is a named defendant in the Supreme Court case. He told the statewide TV news show Nevada Newsmakers that the state would have to return $107 million to taxpayers and DMV customers.

The Nevada Economic Forum, a panel of experts, projected that Nevada would have $9.1 billion in general fund revenue over the next two years — a lump sum much larger than expected at the height of the pandemic. The state also has been allocated $2.7 billion in federal pandemic relief funding.

Settelmeyer said the implications of the ruling were about Democratic leaders' 2019 actions, not the current budgeting process.

“What this means is they shouldn't have stolen the money from the citizens of the state of Nevada. They should have followed the Constitution. They recklessly did not,” Settelmeyer said.

The Legislature’s Democratic majority leaders, Sen. Nicole Cannizzaro and Assemblyman Jason Frierson, called the ruling a “disheartening” product of partisan politics “even in the face of unprecedented shortfalls to our state’s budget this past year.” They said the Republican fight against the 2019 votes favored corporations and hurt families and schools.

“In 2019, the Legislature blocked an unnecessary corporate tax cut and instead funded raises for educators and critical school safety infrastructure,” Cannizzaro and Frierson said in a statement. “Going forward, we call on our colleagues to work with us on meaningful revenue legislation this session.”

The payroll tax is projected to generate about $98 million over the next two years. The court opinion noted the $1-per-transaction DMV fee had been expected to raise $14 million during the two-year budget period.

Legislative Counsel Bureau attorneys who advised the Legislature in 2019 issued an opinion saying lawmakers could extend the tax and fee without two-thirds approval because they didn’t “create, generate or increase” revenue.

Attorney Karen Peterson, representing the Republican lawmakers in May 3 arguments before the state high court, called the constitutional provision unambiguous.

The case was Legislature of the State of Nevada vs. Settelmeyer. The opinion was authored by Chief Justice James Hardesty. It upheld a September 2020 ruling by state court Judge James Todd Russell in Carson City.

Ritter reported from Las Vegas. Sam Metz is a corps member for the Associated Press/Report for America Statehouse News Initiative. Report for America is a nonprofit national service program that places journalists in local newsrooms to report on undercovered issues.