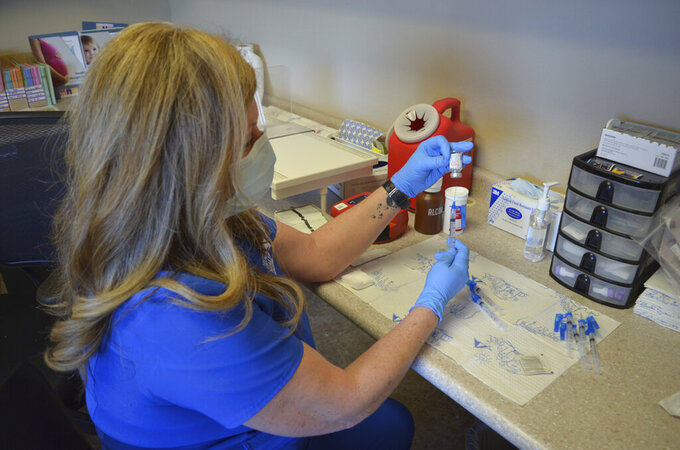 Southwest Utah Public Health Department supervisor Robin McMullin fills up syringes with the Moderna vaccine on Jan. 11, 2021, in Panguitch, Utah. The coronavirus pandemic has swept through this part of rural Utah, infecting more than one in every dozen people. (Lexi Peery/KUER, via AP)

PANGUITCH, Utah (AP) — Just off of Panguitch’s main road, there’s a small, unassuming building that houses the local office for the Southwest Utah Public Health Department. On a clear, chilly day in early January, dozens of Garfield County residents crowded around the entrance waiting to get the COVID-19 vaccine. The people in line ranged from young to old — teachers to first responders.

In the back, Robin McMullin, a supervisor with the health department, was laser focused as she filled up syringes with the Moderna vaccine.

“I feel like it’s liquid gold. I seriously do,” McMullin told KUER-FM. “I don’t want to waste one drop of it because it’s precious, precious gold.”

There have been nearly 400 cases of COVID-19 in a county of just over 5,000 people — that means more than one in every dozen people have had the disease. Garfield County Sheriff Danny Perkins said he’s seen firsthand what this disease can do.

“It’s affected us all in a poor way — and I’m sure beyond Garfield County — but I’m just telling you what I see here in my county,” Perkins said standing outside the vaccine clinic. “From one side of my county to the other has felt the impact and it’s not been good.”

He said the spread of the virus really picked up this fall at the county jail. There, around two thirds of the inmates got it, but there weren’t any serious cases among the prisoners.

“But it got out in our staff and it was devastating,” Perkins said. “There were days that I was ten people down and when you take ten officers off of an office my size, that’s huge.”

As of Feb. 2, nine people in Garfield County have lost their lives because of COVID-19, making it second in the state for deaths per capita. It’s only behind San Juan County, which includes parts of the hard-hit Navajo Nation.

People who died include Sheri Miller, who worked for the county and made cakes for local brides. There was Marnie Miller Blevins, a talkative home health nurse. Former county commissioners who served for over a decade also passed away.

One of those former commissioners was 89-year-old Maloy Dodds. His son Wally said he also had COVID-19 this fall when the virus spread through his family.

“I can’t think of a single person in town that got caught with that first wave,” Wally said. “Then for some reason, when this second wave hit, it just demolished our town. You think about almost every family in town and somebody in their family has had COVID.”

His father Maloy spent time in various public offices, including 16 years as a county commissioner. He also ran his century-old family farm right up until he passed away, Wally said.

Maloy’s health quickly declined after contracting COVID-19 and he died at home days after testing positive. Wally said it was difficult not giving his father the funeral he deserved.

“I think that’s the hardest thing. You know, people want to pay their respects and all that closure and you just don’t get it,” Wally said. “You don’t get a traditional way.”

Martin Ramsay’s dad, Clare, was also a former county commissioner and was devastated when he lost his friend Maloy. Clare coached sports for 30 years at Bryce Valley High School, a cross-county rival of Panguitch. He was known around town as Coach Ramsay.

Clare passed away a few weeks after Maloy. Martin said despite his personal loss, he doesn’t want the county to shut down again.

“(Even) after losing a parent I still don’t think we need to shut down our country, shut down our economy, or tell people what they have to do,” Martin said. “I am really bullheaded and our country was not built on that.”

The community has missed out on big life moments like funerals. The pandemic also cost them the more casual moments, like when they could get together at high school basketball games.

In small towns across Utah — including Panguitch — high school sports are a major pastime. During a normal year, that is. Wally joked about the few options for entertainment in town when it’s dark at 5:30 p.m. Sheriff Perkins agreed.

“It’s a social gathering to get caught up on all the gossip to see how everybody’s doing,” Perkins said. “And it’s been taken away because of this disease.”

Nadine Owens has been the girls basketball coach at Panguitch High for two years now. She said she’s seen how much it means to people in town.

“They’ve had generations before them that have gone through, and so I think for them not being able to really come and watch the games or be a part of this season has been a struggle,” Owens said.

Only a few family members have been allowed at games. Masked attendees sit in small family pods far apart from each other — far from the usual scene. Martin said even though the games are sparsely attended, he’s glad they’re happening for the kids.

“Guess what? All the fans can wait another year or whatever to go,” Martin said. “It’s really weird, it is, but at least the kids are competing and our kids are going to school and so I think that’s a blessing really.”

Typical basketball games and funerals can’t happen until everyone has a chance to get their hands on that “liquid gold.” McMullin said early on that chilly January day they were set up to do a hundred vaccinations. She estimated though they’d end up doing double.

That’s because people who weren’t signed up for an appointment were hanging around to see if there were any extra doses. If there was a chance there were any left over, people didn’t want them to be wasted.

Sheriff Perkins watched as residents streamed in and out of the clinic. He said he’s feeling hopeful about the vaccine. He said he understands some people’s hesitancy about it, but being in the livestock business his whole life, he said he wouldn’t raise a calf without vaccinating it. And he thinks this vaccine is just as necessary.

Now he’s looking forward to warmer months, which tend to bring tourists to the county.

“We’re going to be so busy it’s going to be horrible,” Perkins said with a laugh. “I can see it coming. We’re going to have people from wall to wall here and we need it. Get vaccinated, get healthy and come to Garfield County is what I’m saying.”

Garfield County is a very rural place. With a tough landscape and tough people, said Martin. And he knows they’ll make it through this tough time too.

“Hey, we’ll get through,” Martin said. “You can’t be wimpy here or someone will step on you.”