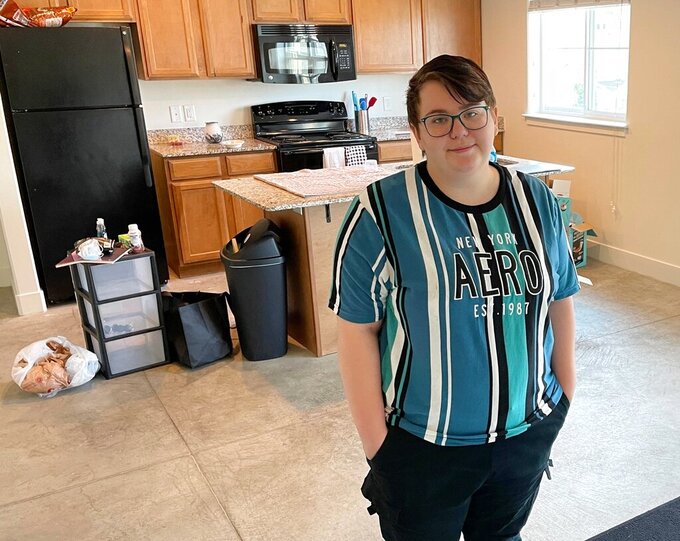 Olivia Kilfoyle stands in her new apartment in Ogden, Utah, on Thursday, May 20, 2021, thanks to assistance from an injection of federal COVID-19 relief funds meant to help those in the foster care system or those who have recently aged out of it. (Tim Vandenack/Standard-Examiner via AP)

OGDEN, Utah (AP) — If not for a special pot of federal COVID-19 relief funding meant to help foster kids and young adults who have left the system, Olivia Kilfoyle worries about what could have been.

Thanks to the funding, she recently moved in to an Ogden apartment, has a place to call home. Without the help — part of some $343.5 million in all meant to help foster kids and former foster youth around the country contend with the fallout from the COVID-19 pandemic — she worries she may have joined the ranks of the homeless, the Standard-Examiner reported. Maybe she would have had to move in to her car or find space on friends’ and acquaintances’ couches.

“It put me in a safe place,” said Kilfoyle, 21, a former foster child now living on her own.

Now, state officials who help foster kids and those who have aged out of the system are putting out a call. Utah received $2 million of the $343.5 million and funds are still available for those in need. “Please get in contact if you’re out there and need help,” said Aubrey Adams, who aids the population as a program administrator with the Utah Department of Human Services’ Division of Child and Family Services.

The pandemic has impacted many. But according to a survey and study by the University of Pennsylvania’s Field Center for Children’s Policy, Practice and Research, the effects were particularly pronounced on older foster kids and those who who aged out of foster care during the pandemic, those aged 18-23. More specifically, it created instability in the living arrangements of many, financial uncertainty and food insecurity. May being National Foster Care Month, the message about helping those who have relied on the system is particularly apt.

What’s more, the pandemic created a sense of isolation among a population that can already feel alone and vulnerable. “About one-third of the participants reported wishing they had connections with more people to help them or they felt they were on their own or almost entirely on their own during the crisis,” the report said.

Kilfoyle said she was contending with an uncertain work situation at a gas station and convenience store as the pandemic was at its worst. The hours were uncertain and some staffers wouldn’t show, prompting the business to unexpectedly close early at times. Eventually she quit the job, which nearly led to homelessness as she shuttled between relatives’ and acquaintances’ homes, none of them ideal situations. Kilfoyle’s parents died when she was young, leading to her involvement with the foster system.

She remembers how her car broke down, how her glasses broke, the difficulties in maintaining contact with caseworkers given all the COVID-19 safety protocols. Then last January, she contracted the virus. “I kind of struggled for a long, long time,” Kilfoyle said.

The COVID-19 funding, though — an extra allocation to the John H. Chafee Foster Care Independence Program, managed by the U.S. Department of Health and Human Services’ Administration for Children and Families — gave her a nudge in the right direction. The money helped her get temporary digs at a hotel and, now, an apartment in central Ogden. She moved in to the apartment just last week and is still in the process of furnishing it.

“For me, it’s just helped me stay in housing,” said Kilfoyle, now employed at a big-box retailer in Ogden.

Kilfoyle echoes Adams’ message, urging other foster kids and those aged out of the system to tap into the funding. She also knows reaching the population can be tough. Many don’t know the funding is out there, she said, and many don’t avail themselves of programming meant to help them. “A lot of kids don’t know they have any help at all,” Kilfoyle said.

Funds, Adams said, can help with back rent, apartment deposits, car repairs and more. Money is also available to help with certain expenses related to schooling. The relief funds are meant for those who are 14 and older and still in foster care. It’s also geared to those no longer in care who are 18 and older but who received care at some point after the age of 14. Through September, former foster youth aged up to 27 can access program funding, but that reverts to those aged up to 23 on Oct. 1.