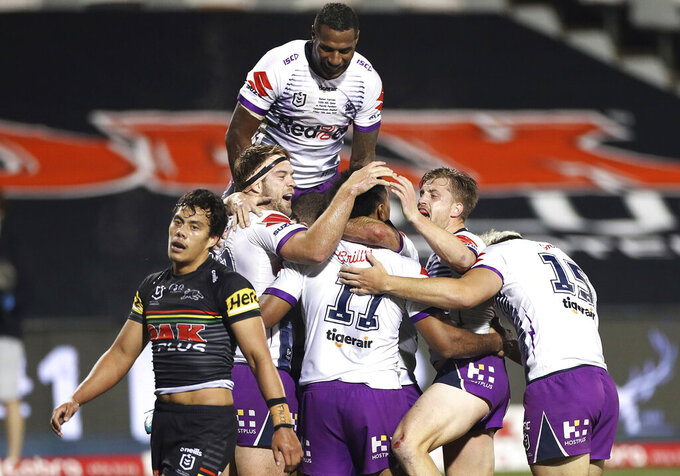 Felise Kaufusi of the Storm, center, celebrates with players after scoring a try during the Round 6 NRL match between Penrith Panthers and Melbourne Storm, in Sydney, Friday, June 19, 2020. A match in Australia’s National Rugby League between the Melbourne Storm and New Zealand Warriors due to be played on Friday has been moved from Melbourne to Sydney because of a spike in coronavirus cases in the state of Victoria. (Craig Golding/AAP Image via AP)

SYDNEY (AP) — An increase in COVID-19 cases in the Australian state of Victoria is playing havoc with a return of most professional sports Down Under.

Victoria had 75 new cases on Monday which resulted in health officials in Queensland state, which has had few new cases recently and has closed its borders to the rest of Australia, enacting tough new protocols which will affect Australian rules football in particular.

Queensland issued new directives that force sporting teams based in the state into a 14-day quarantine should they play a club based in Melbourne, which is the capital of Victoria. But Queensland-based clubs would also be forced into quarantine if they either played in Melbourne, or came up against any team that had been in Melbourne in the preceding 14 days.

The Australian Football League has 10 teams based in Victoria. Six AFL clubs have already been impacted by fifth-round schedule changes, and league head Gillon McLachlan said there is likely to be more.

The National Rugby League is in a better position because it has only one club based in Victoria -- the Melbourne Storm. The Storm are expecting that they will have to stay in their new Sunshine Coast hub in Queensland until at least August, and probably longer.

In rugby union, the Melbourne Rebels have announced that they will move their second-round Super Rugby Australia home match with the Queensland Reds on July 10 to New South Wales.

The Rebels relocated to Canberra last Friday following the spike in coronavirus cases in Melbourne, and they will face the ACT Brumbies this Saturday in the first round of the competition in Australia. By the time they face the Reds on July 10, they will have been outside of Victoria for 14 days.

Soccer’s A-League boss Greg O’Rourke said the worsening situation in Victoria won’t stop the season relaunching on July 16 with a match between Melbourne Victory and Western United at AAMI Park in Melbourne.

There are also increasing doubts about the India-Australia test cricket match at the Melbourne Cricket Ground beginning on Boxing Day, Dec. 26.

'The test match could be moved to Perth, Western Australia, or Adelaide, South Australia, both states which have been less impacted by the virus and could possibly have no restrictions on crowd numbers. That might not be the case at the MCG if the coronavirus is still a concern in Victoria.

“If you look at what’s happening around Australia, by Christmas time the MCG may only be able to host 10,000 to 20,000 people, which is not going to look great when you’ve got a real iconic test match,” former Australia captain Mark Taylor told Nine Network television sports.