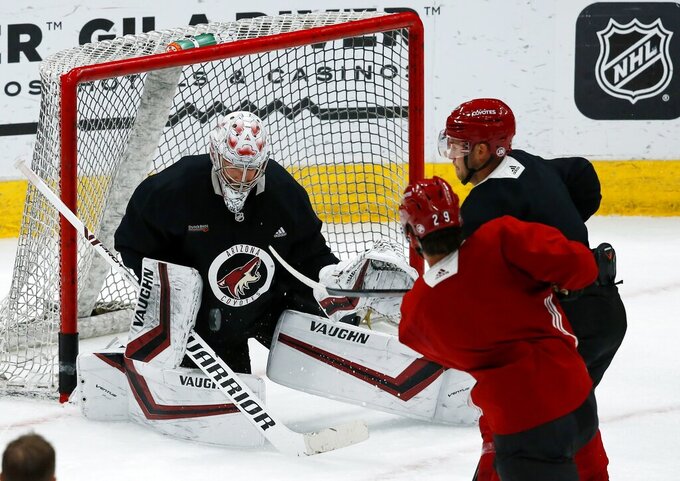 GLENDALE, Ariz. (AP) — The Arizona Coyotes embraced a two-goalie system to start the season, relying on Darcy Kuemper and Antti Raanta to put them in the thick of the Western Conference playoff race.

When injuries hit both goalies, Arizona slid down the standings, faced with needing a big push before the season was halted due to the coronavirus pandemic.

Now that the puck is about to drop again in a rejiggered playoff format, the Coyotes may have an advantage with Kuemper and Raanta healthy again.

“I’m not quite sure you can just run a goalie all the way through and win a Stanley Cup,” Coyotes coach Rick Tocchet said. “I’m not saying some goalies can’t do it, but in this format, it’s going to be tough. We’re lucky, like I said, to have that option and not have that drop-off in a sense."

The Coyotes got off to one of the franchise's best starts this season behind Raanta and Kuemper, who were among the NHL's leaders in save percentage.

The Coyotes labored through January to drop down the standings and had a hard time making up the ground, even after Raanta returned. Arizona was 11th in the Western Conference, five points out of the final playoff spot when the season was halted March 12.

The break gave Kuemper and Raanta time to heal, and the new, one-time playoff format gave the Coyotes a chance to play in the postseason for the first time since reaching the 2012 Western Conference finals.

Having two quality goalies could be an advantage for Arizona in the condensed playoff format. The Coyotes open the Stanley Cup qualifiers against Nashville on Aug. 2 in Edmonton and will play four games in a span of six days.

“What’s going on, the way the format is and what’s been thrown at us, I think if you’re going to go all the way, you need two goalies,” Tocchet said. “And they’re going to play, I think.”

Raanta was brought in to be Arizona's No. 1 goalie after Mike Smith was traded to Calgary in 2017. Acquired in a trade with the New York Rangers, the Finnish goalie was superb early his first season in the desert, finishing with a 2.24 goals-against average.

Raanta suffered a lower-body injury early in the 2018-19 season and was limited to 12 games, opening the door for Kuemper.

Acquired in a trade with the Los Angeles Kings in 2017, Kuemper arrived in the desert as a career backup in parts of six NHL seasons. He was thrust into the No. 1 slot when Raanta got hurt and thrived, earning his first All-Star game nod in 2019, even though he couldn't play due to injury.

Kuemper finished with 27 wins and a 2.22 goals-against average last season and got off to a good start this season before being injured.

He and Raanta had time to heal during the pandemic-caused break in the season, so now the Coyotes have two options in the condensed version of the postseason.

“Nowadays in the league, I think you need to have two strong goalies to be able to win something,” Raanta said. “You can see on other teams also, they’re doing that a lot . So I think it’s only a good thing."

The Coyotes are banking on it as the season is set to resume.