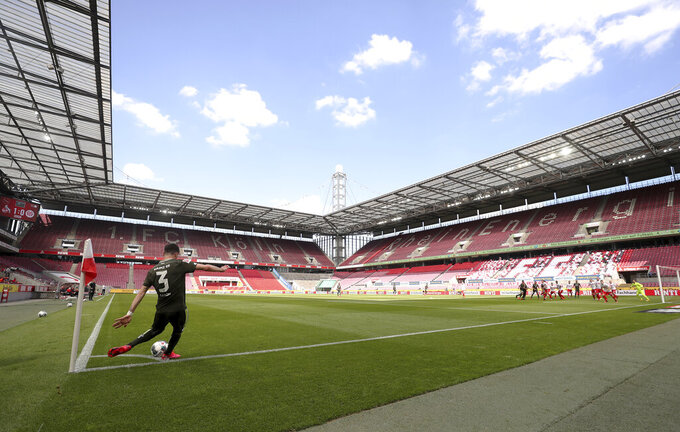 GENEVA (AP) — With soccer clubs losing revenue during the pandemic, one industry leader said Wednesday the idea of creating multi-nation leagues will be revived.

Many clubs risk bankruptcy because of the short-term prospect of playing games in empty stadiums coupled with the long-term struggle to retain and find sponsors.

Cross-border leagues will need to be looked at again in a wider debate of soccer economics, according of Jonas Baer-Hoffmann, general secretary of the global players’ union network FIFPRO.

“It might not be sustainable to run so many clubs,” Baer-Hoffmann told reporters in a conference call.

Until a vaccine for COVID-19 is available, clubs face being denied match-day revenue that is key in countries where domestic and international broadcasting deals are less valuable.

“That throws a big rock at the business models of these leagues,” the FIFPRO official said.

Multi-nation leagues have long been discussed in Europe as a possible solution for mid-ranking countries which have some standout clubs but struggle to compete commercially with big-market rivals.

The Dutch and Belgian leagues, which both had to end their seasons early due to the health crisis, are seen as the most likely cross-border partners. No formal proposal has been made to European soccer body UEFA.

“There is a need for a general overall economic conversation for the industry,” Baer-Hoffmann said Wednesday, looking ahead to a difficult year for players and their employers.

One team executive from Croatia suggested last week 100 to 200 clubs could go bankrupt this year if their needs are not understood.

Baer-Hoffmann noted that in Scotland, 43% of soccer revenue was “based on attendance at games.”

FIFPRO has 65 affiliated national player unions worldwide, including in many countries where players get salaries comparable to national averages.

“They are being stranded in terms of income,” he said, adding the vast majority of soccer players are “under the same financial pressures as the rest of society.”