Cruel twist: Browns lose coach for playoffs due to COVID-19 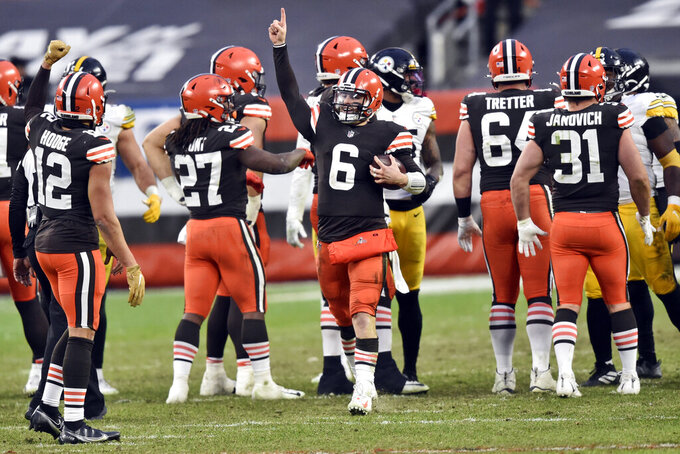 CLEVELAND (AP) — Amid a masked, muted celebration in the locker room after the Browns ended the NFL's longest playoff drought, coach Kevin Stefanski asked for a game ball and then told Pro Bowl guard Joel Bitonio to step forward.

Stefanski flipped the ball to Bitonio, who had survived seven long seasons, 0-16 in 2017, the Johnny Manziel mess and numerous coaching changes.

“You're going to the playoffs, 75,” Stefanki told Bitonio.

Two days later, nothing is certain with the Browns.

The Browns announced Tuesday — 18 years to the day since their last playoff game — that Stefanski tested positive for the coronavirus, which has plagued the team in recent weeks and has thrown Cleveland's plans this week into disarray for the wild-card game.

In less than 48 hours, joy for the Browns and their fans long-suffering fans was all but extinguished.

Now, after beating the Steelers last Sunday to make the playoff field, the Browns are implementing contingency plans drawn up when the pandemic began.

Stefanski, who in his first year returned the Browns to respectability, can only coach virtually from home this week. He'll be replaced by special teams coordinator Mike Priefer, and the Browns will have to make other staff adjustments as tight ends coach Drew Petzing and defensive backs coach Jeff Howard are also out.

Despite the Browns' issues — they now have eight rotational players and five coaches on the COVID-19 list — league spokesman Brian McCarthy said the game is on schedule.

McCarthy added the league is continuing to conduct contact tracing to identify any possible high-risk close contacts. NFL rules state that anyone testing positive must be away from the team at least 10 days.

“If any players or personnel are identified as such, they would remain apart from the team and facilities for five days from the last exposure to a positive individual,” McCarthy wrote in an email. “They would be eligible to return to the team and play in the game.”

It’s still possible the Browns will lose other players after contact tracing is completed.

The genomic sequencing conducted by the league and its medical partner last week showed Cleveland’s cases were unconnected, meaning the cases came from outside and weren’t spread within the team’s headquarters.

Tretter said on a union conference call that he expects the building to remain closed Wednesday, when the Browns were scheduled to have their first practice this week.

Tretter said he had been in touch with Bitonio.

“I feel for him,” Tretter said. “Obviously with what he’s gone through, what he’s endured over his career and finally finding that success for the first time and then it being taken away at the last second, it’s hard. I feel for all the guys that won’t be able to play for the first playoff game.

“Extremely tough. This is just a terrible scenario for him and for everybody involved.”

Because Bitonio and Hodge played in the 24-22 win over the Steelers last Sunday, there would seem to be concern that some Pittsburgh players could be infected.

However, McCarthy said the league has “found no evidence of player-to-player transmission from practices or games throughout this season.”

Steelers coach Mike Tomlin, who spent a few minutes speaking with Stefanski on the field Sunday, said he's not concerned about playing the Browns twice in eight days.

“I have complete confidence in the protocol outlined by the NFL,” Tomlin said. "We work hard to adhere to it; if we do that, we will minimize risk. That’s my mentality regarding it, so I won’t spend a lot of time worrying about those components.”

The Steelers have their own COVID-19 issues. Starting cornerback Joe Haden and tight end Eric Ebron missed Sunday's loss after being placed on the COVID-19 list a day earlier. Haden tested positive; his status for the playoff game remains uncertain.

Cleveland has been one of the teams hit hardest by the virus. The Browns were without six players, including star cornerback Denzel Ward, and three assistants last weekend for their biggest game in years after a rash of positive tests.

On Monday, Stefanski said he didn't want to get into “hypotheticals” regarding Ward or any of the other infected players. Now, he won't be able to be around his players or assistants while getting ready to play at Pittsburgh, where the Browns have lost 17 straight games.

The Browns are the second team to be without its coach during the pandemic. Detroit interim coach Darrell Bevell sat out the Lions’ Dec. 26 game at Tampa Bay because of COVID-19 protocols.

The Baltimore Ravens played a game against Pittsburgh without quarterback and reigning league MVP Lamar Jackson after an outbreak, and the Denver Broncos didn't have any quarterbacks active for a game at New Orleans due to contact tracing.

Priefer, who is from Cleveland and spent several years on Minnesota's staff with Stefanski, was an interim coach for one game in 2016 when Mike Zimmer had eye surgery.