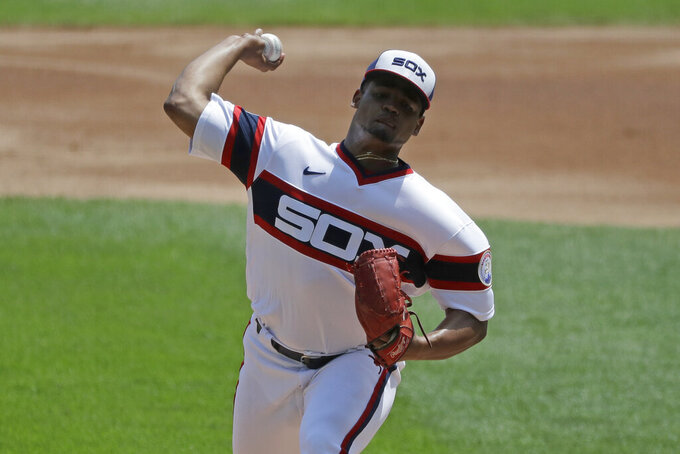 Cruz added two doubles and drove in seven runs for the reigning AL Central champion Twins, who won two of three. Maeda (1-0), a Japanese right-hander who was traded in February from the Los Angeles Dodgers, allowed two runs and struck out six in five innings.

“It was a beautiful first start for him,” Twins manager Rocco Baldelli said. “He went out there and was extraordinarily sharp.”

Cave hit his second career grand slam in the first. Jiménez crashed into the fence chasing the ball and left the following inning because he was light headed.

Cruz hit a three-run double before Eddie Rosario doubled and Luis Arraez singled to extend the Twins’ lead to 9-0 in the second inning.

“What a guy,” Maeda said about Cruz through an interpreter. “He’s getting hits, home runs and as a pitcher looking at him I don’t think there’s a pitch you could throw to put him away. So I’m really glad we’re on the same team. It’s really relaxing to have him in our lineup.”

Cruz smacked a 435-foot solo shot in the fourth and added a three-run drive in the eighth for his 35th career multi-homer game. He went 7 for 13 with 10 RBIs and three home runs in the series.

“It’s something I love,” Cruz, 40, said about staying strong during the pandemic. “I love to work out. I don’t see it as a job or work. I love to do what I do, so hitting or going to the weight room, it’s fun, it’s part of my life.”

Marwin Gonzalez added a solo shot in the ninth for the Twins, who hit a major league-record 307 homers last season.

Robert hit a first-pitch, two-run homer off Maeda to cut the Twins’ lead to 10-2 in the fifth.

López exited with right shoulder tightness after recording just two outs, throwing 38 pitches and allowing four runs. Lopez was 0-3 with a 9.60 ERA in three starts against the Twins last season.

“It was bothering me since the beginning of the game,” Lopez said through an interpreter. “The pain was increasing with every pitch. It was more difficult every pitch.”

Twins: C Willians Astudillo (COVID-19) has been cleared to join the St. Paul group after testing negative. No timeline is set for his return to the 30-man roster. He missed all of summer camp after testing positive for the virus. … RHP Jake Odorizzi (sore back) will throw a bullpen session early this week, Baldelli said. … CF Byron Buxton (sprained left foot) could return Tuesday in the home opener against St. Louis. … LHP Lewis Thorpe (contusion) exited after a grounder hit his leg in the eighth.

White Sox: INF Yoán Moncada, who missed the start of summer camp due to COVID-19, got Sunday off for rest but is expected to play all three games in Cleveland, manager Rick Renteria said. … OF Nomar Mazara, who went on the 10-day IL Wednesday for an undisclosed reason, is “progressing well,” Renteria said.

Renteria said Jiménez was feeling better, and he and López will be reevaluated Monday. Gio González could help fill in for López if needed, Renteria said.

White Sox: RHP Dylan Cease, who was 4-7 with a 5.79 ERA last season, starts at Cleveland to open a three-game series Monday. RHP Aaron Civale pitches for the Indians.