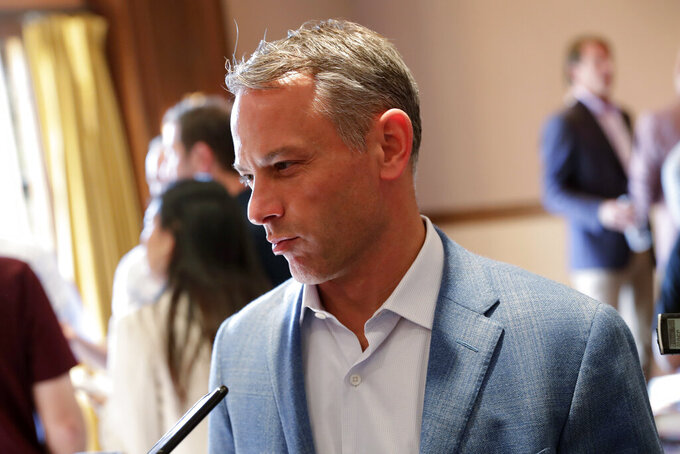 FILE - Chicago Cubs general manager Jed Hoyer speaks during a media availability during the Major League Baseball general managers annual meetings in Scottsdale, Ariz., in this Tuesday, Nov. 12, 2019, file photo. Cubs president of baseball operations Jed Hoyer indicated the team might conduct more thorough background checks when deciding who to hire in the wake of sexual harassment accusations against former director of pro scouting Jared Porter. Hoyer called the alleged incidents “disturbing" on Monday, Feb. 8, 2021. He said there's “no place for them in the game," and it's his job to make sure Wrigley Field is a workplace where women can thrive. (AP Photo/Matt York, File)

CHICAGO (AP) — Jed Hoyer plans to chat with Kris Bryant about his future during spring training. Also on deck for the top baseball executive for the Chicago Cubs: similar discussions with Javier Báez and Anthony Rizzo.

All three sluggers have contracts set to expire after this season, when they can become free agents. How much longer they remain in Chicago are big questions as the Cubs open spring training on Wednesday in Arizona.

“I'd love to have that continuity with these guys going forward," Hoyer said Tuesday. "Financially, it's impossible for any team to be able to continue with that group.”

Chicago's luxury tax payroll would have been $216 million last year had the full season been played, well above the tax threshold for the second straight year.

Bryant, Báez and Rizzo helped Chicago win the World Series in 2016, stopping a championship drought dating to 1908. The Cubs finished first in the NL Central last season and made the playoffs for the fifth time in six years. But they managed just one run over two games in a wild-card sweep by Miami.

Chicago hasn't advanced in the postseason since reaching the NL Championship Series in 2017. A makeover is under way. And it's not clear how much longer three of its biggest stars will remain with the team.

Bryant's name, in particular, has come up in trade rumors. Hoyer said the Cubs have not engaged in talks with other clubs of late.

“We were involved in a lot of rumors this year,” Hoyer said. “Some were just completely inaccurate. And then I would say some were just sort of exaggerated — the seriousness of those discussions.”

But he also acknowledged more changes are coming, that the odds of retaining Bryant, Rizzo and Báez are slim. Bryant has a $19.5 million salary, Rizzo $16.5 million and Báez $11.65 million.

“We’ve said all along, very clearly, we’d like to keep some of these players,” Hoyer said. “That would be great. But it’s unrealistic to keep all of the players that were a significant part of 2016. That’s just a reality.”

Chicago made some major moves in the offseason.

Theo Epstein stepped down, and Hoyer was promoted to president of baseball operations.

The Cubs traded ace Yu Darvish along with $3 million to San Diego, saving $56 million from 2021-23, and said goodbye to Jon Lester, who signed a $5 million, one-year deal with Washington in free agency. They declined to offer a contract to slugger Kyle Schwarber, who signed a $10 million deal with the Nationals, and gave Joc Pederson a $7 million agreement to replace him.

The Cubs are reuniting with one familiar face after Jake Arrieta agreed last week to a $6 million deal that is pending a physical. The 2015 NL Cy Young Award winner would essentially take Lester's spot after Hoyer was given some added financial flexibility in recent weeks.

“It was really more of a timing issue than anything,” Hoyer said. “Jon Lester's been sort of a constant in my career. I love having him. He's an A-plus teammate and obviously an A-plus competitor.”

Hoyer indicated the Cubs were close to adding a reliever, saying they “probably” will announce a deal soon. He also said Rowan Wick will be slowed at the start of camp because of a muscle injury in the ribs area, and Kyle Ryan will be delayed because of COVID-19 protocols.

When it comes to the closer, the Cubs appear to be set. That job belongs to Craig Kimbrel for now.

Manager David Ross said he expects him to start the season in his familiar role after pitching better down the stretch last year. The seven-time All-Star struggled early in 2020 and lost his job. But in eight appearances in September, Kimbrel did not allow a run and struck out 13 without a walk in 7 1/3 innings. Jeremy Jeffress, who had a 1.54 ERA and eight saves in 10 chances, is a free agent.

“He went through a little bit of bumps,” Ross said. “He worked his way back into being himself. Talking to him, he feels great this offseason. The work, the videos he's sent in, he looks really polished already. ... As long as Craig is who we know he can be, he's gonna be our closer.”