Cup loss sees Newcastle facing up to another bleak season 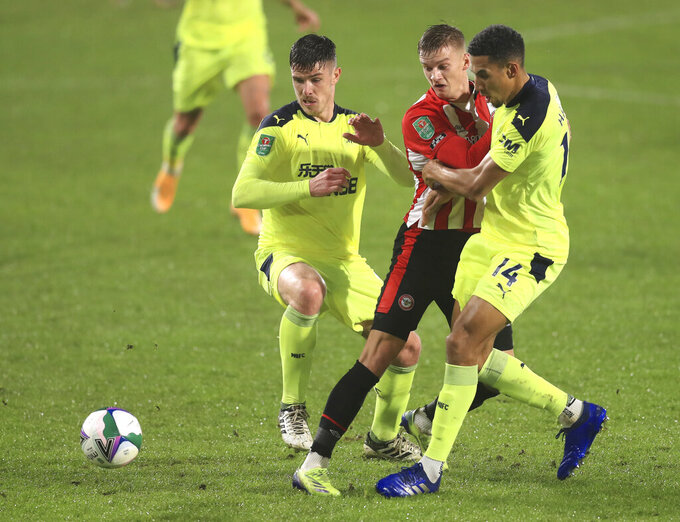 The carrot was a first cup semifinal in 16 years. The opponent was a second-division club fielding a team mostly containing reserve players.

This was Newcastle's players' big chance to give their disillusioned fans something to smile about, three days before Christmas.

A listless performance in a 1-0 loss to Brentford in the English League Cup quarterfinals left Newcastle facing up to another bleak season and its manager fearing the worst.

“I have to accept what’s coming my way is part and parcel of being the manager of Newcastle,” Steve Bruce said. “The criticism is fully justified.”

With the Brentford Community Stadium empty during the pandemic, Newcastle’s players were spared criticism from the team’s match-going fans at the final whistle. Instead, the backlash came over social media, with renewed calls for Bruce to be fired and questions to be asked about the direction of a northeast club still up for sale after the aborted takeover attempt by Saudi Arabia’s sovereign wealth fund over the summer.

And that wasn’t lost on Bruce.

“The supporters are entitled to their opinion and I accept that,” he said.

“I’m a resilient so-and-so,” Bruce added, “so I’ll need to be ready for what’s coming my way.”

On the face of it, Newcastle hasn’t fared too badly this season. Aside from reaching a cup quarterfinal, the team is in 12th place in the Premier League — eight points from the bottom three — after winning five of its 13 games.

For a club whose ambition appears to simply be staying in the world’s most lucrative league, there’s little to be concerned about. At least that might be the outlook of its owner, retail entrepreneur Mike Ashley, who is currently seeking to add to his stock of department stores amid a pandemic that is hitting the high street hard.

But a troubling past week, and a festive schedule that couldn’t really be any harder, points to problems ahead.

A week ago, Newcastle was thrashed 5-2 by Leeds in the league. Then, Bruce’s team needed a contentiously awarded penalty to scrape a 1-1 home draw with lowly Fulham despite playing against 10 men for the final half-hour.

Then the Brentford game, which saw a second-tier team that made six changes owing to upcoming fixture congestion — including leaving its top scorer on the bench — dominate Newcastle. Brentford should have been well ahead by the time Josh Dasilva volleyed home what proved to be the winner in the 66th minute.

Ahead for Bruce is a run of tough league games starting with a trip to Manchester City on Saturday, followed by the visits of champion Liverpool on Dec. 30 and then second-place Leicester on Jan. 3.

Then, a week later, there’s an away match at Arsenal in the third round of the FA Cup. Lose that, and it’s another year without a major trophy — Newcastle’s last was in 1969 — and the season will boil down to avoiding relegation.

“That defeat was embarrassing,” Thomas Concannon, vice chair of the Newcastle United Supporters Trust, said on Twitter after the Brentford game. “Partly due to the opposition being in a lower league and making so many changes, but that's how easy it has become to nullify us.

“It begs the question once again, where are we going as a football club?”

Fans’ hopes were raised this year by the prospect of new ownership coming in and giving the club some ambition. Many were prepared to ignore concerns about Saudi Arabia’s human-rights complaints, just to get Ashley out.

Instead, there’s just ongoing uncertainty about the club's future — and, in the short term, disgruntlement about a team that might be the most unattractive watch in the Premier League despite Bruce attempting to play a more attacking style this season with new signings Callum Wilson and Ryan Fraser complimenting tricky wingers Miguel Almiron and Allan Saint-Maximin.

In fairness to Bruce, he has had to deal with a COVID-19 outbreak at the club that led to the cancellation of a recent fixture against Aston Villa and has seen him deprived of key players in Saint-Maximin and captain Jamaal Lascelles, who have suffered particularly badly after contracting the virus.

They are unlikely to be fit for the City and Liverpool games, which could be damage-limitation exercises if recent results are anything to go by.

“It’s a case of doing what we can back at the training ground and finding some confidence.”