Cycling worlds moved to Imola after Swiss host backs out 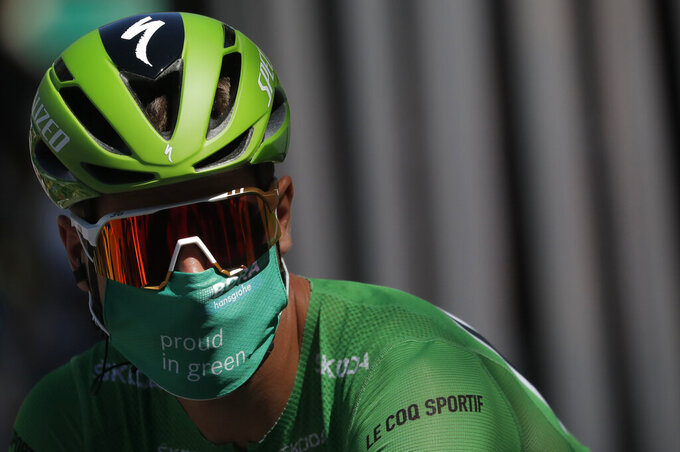 Slovakia's Peter Sagan arrives for the start of the fifth stage of the Tour de France cycling race over 183 kilometers (113,7 miles) with start in Gap and finish in Privas, southern France, Wednesday, Sept.2, 2020. (Stephane Mahe/Pool via AP)

AIGLE, Switzerland (AP) — This month’s road cycling world championships were moved to Imola, Italy, on Wednesday after Swiss host Aigle-Martigny backed out because of a government ruling limiting mass gatherings amid the coronavirus pandemic.

The revised event from Sept. 24-27 will feature only elite men’s and women’s categories, eliminating junior and under-23 races.

“The majority of the top athletes in the elite men and women categories are already in Europe, as opposed to their younger counterparts (juniors and under 23) whose national delegations, in a significant number of cases, will not be able to travel to Italy due to travel restrictions imposed in numerous countries,” the International Cycling Union said in a statement.

The Swiss organizers of the championships, which were supposed to be centered around Aigle, where the UCI is based, said they could not continue within a federal limit of 1,000 people for major events during the coronavirus pandemic.

The races in Imola, which hosted the worlds in 1968, will all begin and end on the city’s auto racing circuit.

“I congratulate the Imola organizing committee for the excellent quality of its bidding file which it succeeded in producing in a short lapse of time,” UCI president David Lappartient said. “I would also like to thank the three other candidates Peccioli (Italy), Alba Adriatica (Italy) and the Haute-Saône (France) who also sent solid files to the UCI. … It goes to show that even in this difficult period that we are going through, the UCI world championships are still very attractive for cities and their regions.”