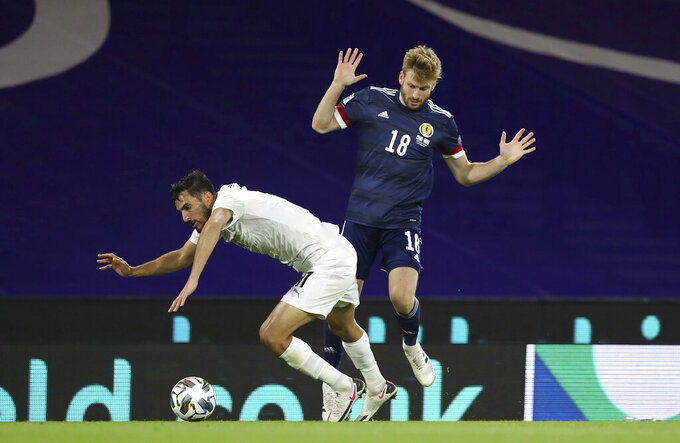 PRAGUE (AP) — The Nations League game between the Czech Republic and Scotland scheduled for Monday will not take place, according to the central European nation's football association.

The Czechs beat Slovakia 3-1 on Friday but have been hit with a coronavirus outbreak in the build-up to the match.

A statement on the FACR website read: “The national team will not play against Scotland on Monday due to representatives decision and the current situation with the Covid-19.”

Scotland was due to travel to Olomouc on Sunday after drawing 1-1 against Israel in Glasgow in their opening match on Friday.

The Czech plans had been affected after West Ham midfielder Tomas Soucek and RB Leipzig striker Patrik Schick were told to self-isolate after coming into contact with a staff member who tested positive for the virus.

The Czech FA delayed their departure for Slovakia by 24 hours while the entire squad was re-tested and the players made the 240-kilometer (200-mile) journey by road.

However, after their opening win, the FACR added: “There is great concern that the virus could spread further.”

The announcement could lead to the Czech Republic forfeiting the points.