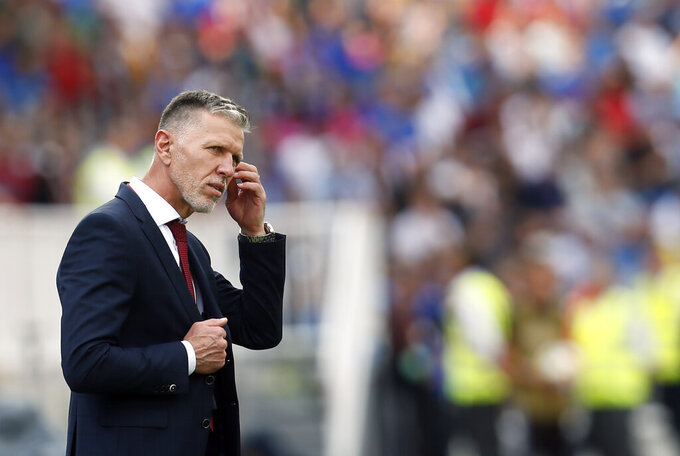 In the file picture taken on Saturday, Sept. 7, 2019, Czech Republic coach Jaroslav Silhavy gestures during the Euro 2020 group A qualifying soccer match between Kosovo and Czech Republic, at Fadil Vokrri stadium in Pristina, Kosovo. A staff member of the Czech national soccer team was tested positive for COVID-19 ahead of the start of the UEFA Nations League campaign. The Czech team said on Wednesday Sept. 2, 2020, that all the other members of the team, including the players and coaches, tested negative in additional testing. (AP Photo/Visar Kryeziu/File)

PRAGUE (AP) — A staff member of the Czech national soccer team has tested positive for the coronavirus, days before the start of its UEFA Nations League campaign.

Players, coaches and other staff all had negative results in additional testing on Wednesday, the Czech team said.

The Czechs play Slovakia in Bratislava on Friday before hosting Scotland in Olomouc on Monday.

The person who tested positive has not been named and immediately left the team’s hotel in Prague.

The Czech team will leave for Slovakia on Thursday, a day later than originally planned.