Czechs in chaos with political infighting amid virus surge 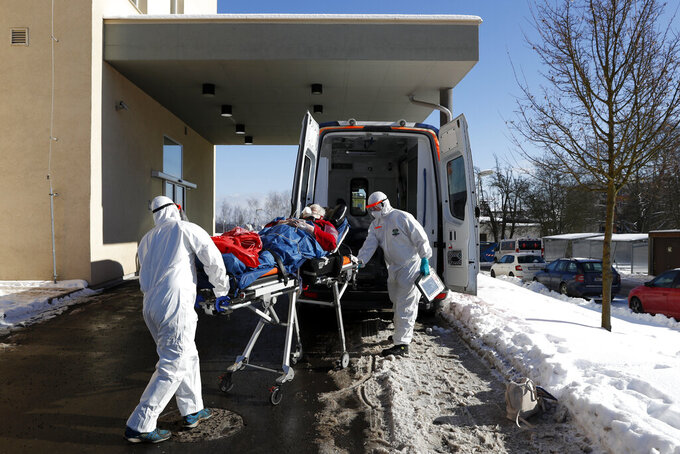 Medical workers move a covid-19 patient into an ambulance at a hospital overrun by the covid pandemic in Cheb, Czech Republic, Friday, Feb. 12, 2021. The Czech government has imposed a complete lockdown of the three hardest-hit counties to help contain the spread of a highly contagious variant of the coronavirus. The meeasures will became effective Friday for the two counties in western Czech Republic on the German border Cheb and Sokolov and another county in the northern part of the country Trutnov located on the border with Poland. (AP Photo/Petr David Josek)

PRAGUE (AP) — With a new, highly contagious coronavirus variant gaining force, the already hard-hit Czech Republic was in chaos on Friday after lawmakers deprived the government of a powerful tool to tackle the pandemic.

The lower house of Czech Parliament late Thursday refused the minority government’s request to extend a state of emergency, a measure that gives Cabinet powers to impose and keep in place strict nationwide restrictive measures and limit individual rights.

Ministers have warned the move will further worsen the situation and might cause the struggling health system to collapse.

“The situation is serious,” Prime Minister Andrej Babis told reporters Friday evening after meeting President Milos Zeman. “It poses a threat for the health of our citizens.”

Opposition parties say the current lockdown isn't working and accused Babis of not doing enough for businesses and others affected by restrictions.

They also complained that the government has been refusing to take seriously their proposals to deal with the pandemic, and insisted schools should reopen.

The current state of emergency will expire on Sunday night after 132 days. The government can use other legal options to reimpose some measures but not all of them.

“We will immediately apply all those remaining options we have,” Health Minister Jan Blatny said. “(But) they're not as effective” as powers under the state of emergency.

As a result, bars, restaurants and cafes can possibly reopen Monday while the night-time curfew and a ban on gatherings of more than two people will be canceled.

The end of the state of emergency might also limit use of military medical personnel in civilian hospitals, and firefighters helping distribute protective gear and other equipment across the country.

The government discussed the crisis Friday and met the heads of 14 regional governments who could declare a state of danger in their region to be able to reimpose some restrictions. Another such meeting is scheduled for Saturday.

“We need to find a solution by Sunday morning at the latest,” Babis said.

Some of the regional leaders suggested they would like to ask the government to declare the state of emergency again.

If they do so “the government would likely agree to do it,” Interior Minister Jan Hamacek told the Czech public television on Friday.

Such a step would likely face a legal challenge.

But Babis said his legal advisers support such a solution.

“It's the only possibility to extent the state of emergency,” he said.

Meanwhile on Friday, almost 600 police officers were deployed to enforce a complete lockdown of the three hardest-hit counties on the border with Germany and Poland, to help contain a fast-spreading variant of the coronavirus initially identified in Britain.

The area's residents are barred from leaving and outsiders cannot travel there, with certain exceptions such as for work.

Local hospitals have reached their limits and COVID-19 patients have to be transported to hospitals in other parts of the Czech Republic.

Of the 120 patients in one of the hospitals in Cheb, 90 currently have COVID-19, and it cannot admit more, hospital director Martin Krusina told The Associated Press.

About 25 people die each month on average in his clinic, but it was 87 in January, he said.

In reaction to the surge across the border, Germany decided to temporarily reinstate border controls with the Czech Republic and Austria on Sunday due to their high number of variant coronavirus cases.

The Czech Republic, a nation of 10.7 million, has had more than 1 million confirmed cases, with 17,902 deaths

According to the European Centre for Disease Prevention and Control, its rate of 915 new confirmed cases per 100,000 people in the past two weeks is the second worst in the EU after Portugal.

The day-to-day increase of cases in the Czech Republic was 8,916 on Thursday, a number similar to that recorded in neighboring Germany whose population is more than eight times as big.