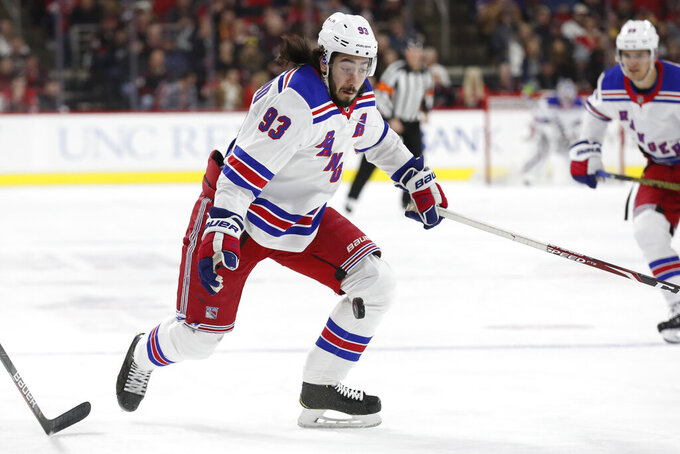 FILE - In this Feb. 21, 2020, file photo, New York Rangers center Mika Zibanejad (93) skates for the puck during the first period of the team's NHL hockey game against the Carolina Hurricanes in Raleigh, N.C. The Rangers were playing some stellar hockey coming out of the All-Star break to move into playoff contention. After four months away during the NHL’s pause due the coronavirus pandemic, team president John Davidson liked what he saw in the first practice back. Now, Zibanejad and Artemi Panarin look to pick up where they left off as the Rangers have 2 1/2 weeks to prepare for an extended postseason that begins with a five-game series against Carolina in Toronto on Aug. 1. (AP Photo/Gerry Broome, File)

The New York Rangers were playing some stellar hockey coming out of the All-Star break to move into playoff contention. After four months away during the NHL’s stoppage due to the coronavirus pandemic, team president John Davidson liked what he saw in their first practice back.

“I feel strong about the way we played at the time of the pause, and after what I saw today ... I feel really good about things,” Davidson said Monday on a video conference call with reporters.

“I’m very proud of our group. Not just the players, but the training staff, the doctors, everybody involved. .... We’ve been going at this for eight weeks, 10 weeks. We’ve had Zoom calls, we’ve talked about the virus itself and how you can protect yourself, the players, the coaches, the staff, everybody has paid attention to it.”

The Rangers were 19-18-4 in early January after losing three straight on a trip through Western Canada. They picked up their defensive intensity and got into a groove after the All-Star Game with a 12-2-1 run to climb into the playoff race. A 2-4-1 stretch followed to leave them two points behind Carolina and Columbus for one of the Eastern Conference’s two wild cards when the season was interrupted on March 12.

When the league decided to go straight to a 24-team postseason in May upon resumption, the Rangers were seeded 11th in the East based on points percentage and drew a matchup with sixth-seeded Carolina in a five-game series in a play-in round for the Eastern Conference playoffs in Toronto starting on Aug. 1.

“Guys are excited for the opportunity we have right now,” Mika Zibanejad said. “There’s a lot of laughter, a lot of fun in that locker room. I’m hoping we’ll continue where we left off.”

The Swedish center had a career-high 41 goals in 57 games. His 75 points eclipsed his previous best of 74 set the previous season in 82 games.

“I felt obviously more confident and the puck went in,” Zibanejad said. “I didn’t do it by myself. I get put in pretty good situations, pretty good spots on the ice and teammates did an unbelievable job to get me the puck in that situation and I was able to score.”

One of those teammates was Artemi Panarin, the biggest prize in free agency last summer. Panarin had a stellar debut season in New York with a career-high 95 points in just 69 games. He finished with career bests in goals (32), assists (63) and power-play points (24).

Rangers coach David Quinn said he wants his team to pick up where it left off, but also preached caution during this training camp.

“We really liked a lot that was going on with our chemistry and our D pairings,” he said. “I want to give these guys an opportunity to find that again. That might take some time because every guy’s had an opportunity to do different things when it comes to staying in shape during this four-month break. ... Some guys had more access to things than others.”

A big question remains concerning which goalie will get the start for Game 1 against the Hurricanes.

Veteran star Henrik Lundqvist struggled in the first half of the season and saw backup Alexandar Georgiev (17-14-2 with a 3.04 goals-against average) get increased playing time. Igor Shesterkin made his NHL debut in early January and went 10-2-0 with a 2.52 GAA to earn the No. 1 spot.

Davidson said all three looked “very sharp” in Monday's practice, adding “it’s going to be up to the coaches when they put their heads together and make that decision."

Lundqvist said the time away gave him a chance to work on his skills and conditioning, as well as his mental preparation.

“I feel coming back now I’m in a really good place in all three areas,” he said. “We’re three guys competing for one spot, so we’ll see who gets to play.

”I just take it day by day here and work as hard as I can and see if it's enough to play. And if it’s not enough to play I’ll try to be very supportive and just go from there."

Quinn plans to let the competition play out during training camp before deciding on his starter for the series opener.

“I had a meeting with all three of them about how important the next three weeks are going to be,” the coach said.