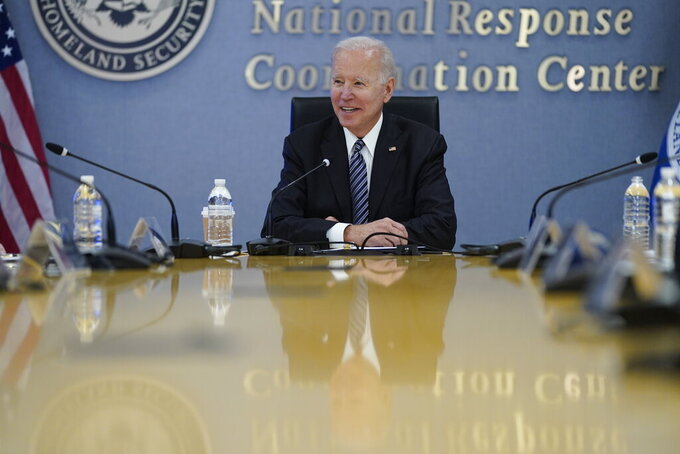 President Joe Biden participates in a briefing on the upcoming Atlantic hurricane season, at FEMA headquarters, Monday, May 24, 2021, in Washington. (AP Photo/Evan Vucci)

WASHINGTON (AP) — President Joe Biden’s infrastructure plan is hitting roadblocks. A policing overhaul after the killing of George Floyd is up in the air. Even a seemingly bipartisan effort to investigate the Jan. 6 insurrection at the Capitol faces the blockade of Republican opposition in Congress.

It's a pivotal time for many aspects of Biden's ambitious agenda. Rounding the first quarter of his presidency, the White House and Congress have been unable to meet key Memorial Day deadlines set by the administration on crucial priorities.

While lawmakers quickly approved Biden's $1.9 trillion COVID-19 rescue package and senators confirmed the top ranks of the administration with Biden's nominees, the next legislative priorities on the White House's agenda will be a longer slog.

The sweeping infrastructure investment, in particular, faces a crucial moment: The White House is assessing whether the president can strike a bipartisan deal with Republicans on his American Jobs Plan, a top domestic priority, or try to go it alone with Democrats if no progress is made over the next week. Biden's allies in the House and Senate are preparing for all scenarios.

"This is going to feel like a tightrope walk all the way until it gets to Biden’s desk,” said Jim Kessler, executive vice president of Third Way, a centrist think tank.

Presidents are often judged not only by the goals they achieved, but whether their proposals were popular with the public and the leadership in trying to muscle the bills into law. The White House appears to be taking those factors to heart as Biden makes his case to the public and conducts extensive outreach for his agenda on Capitol Hill.

The administration is signaling that it’s important not just whether Biden can push his infrastructure and other proposals into law, but how he does it. By this reasoning, voters — and some moderate Democratic lawmakers — are more likely to be on board if Biden at least tries for bipartisanship.

The White House said Monday that Biden is awaiting an infrastructure counteroffer from Senate Republicans after a core group of GOP negotiators rejected his latest $1.7 trillion proposal, leaving the fragile talks on a compromise at a standstill.

White House Press Secretary Jen Psaki said the president is “eager to engage" and would welcome more talks with the senators. But she said the Republicans have “a ways more to go” to find common ground. Biden dropped $500 billion from his initial $2.3 trillion offer, and Psaki said the Republicans raised their $568 billion offer by about $50 billion. Republicans have rejected Biden's plan to pay for the road and broadband spending with a corporate tax increase.

“The ball is in the Republicans' court,” Psaki said at the White House briefing.

At the same time, key congressional negotiators are working behind the scenes on a bipartisan police overhaul in response to a nationwide reassessment of law enforcement practices sparked by Floyd's death a year ago Tuesday in Minneapolis. Biden had hoped to have the legislation ready by the anniversary.

In a rare joint statement Monday, negotiators Sen. Tim Scott, R-S.C., Sen. Cory Booker, D-N.J., and Rep. Karen Bass, D-Calif., said, "This anniversary serves as a painful reminder of why we must make meaningful change. While we are still working through our differences on key issues, we continue to make progress toward a compromise and remain optimistic about the prospects of achieving that goal.”

But other priorities on gun violence, voting rights and immigration law face long odds with the narrowly split Congress and robust opposition from Republicans. Democrats hold only a slim majorities in the House and evenly divided Senate, and much of Biden's agenda would require broader support to reach the 60 votes under the rules to advance past a Senate filibuster.

Senate Republican leader Mitch McConnell has said repeatedly that “100% of my focus” is on stopping Biden’s agenda.

The West Wing believes its bargaining position is strong. Aides point to Biden’s high poll numbers and the popularity of his proposals, all while believing that they have the option of muscling the infrastructure plan to passage under special budget reconciliation rules that require only a party-line vote.

But there is a growing sense of urgency within the White House and among Democrats. After a burst of legislative accomplishment, including the sweeping COVID relief bill, the pace has slowed dramatically. And the future may hinge on a few select senators.

After Biden was elected on the heels of a campaign promise to work with Republicans, the White House has been quick to defend his bipartisan record of accomplishment.

Aides have pointed to how quickly the president's Cabinet was confirmed — one choice, Neera Tanden, withdrew after it was clear she would not get support.

Along with Biden’s chocolate-chip cookie diplomacy — inviting lawmakers to the White House, treating them with sweets on the way out — the administration has been conducting vigorous outreach to Capitol Hill. The White House has had nearly 1,000 phone calls or meetings with lawmakers or their staffs, including more than 200 with Republicans on the jobs plan and the related American Families Plan — the president's stalled proposal to invest in preschool, child tax credits and other so-called human infrastructure.

Still, the partisan tensions are stark, showing the limits of Biden's ability to bridge the divide.

This week, legislation passed by the House to establish a bipartisan commission to investigate the Jan. 6 insurrection at the Capitol is likely to face a filibuster by Republicans in the Senate. GOP leaders argue the panel is unneeded as they try to move past the deadly riot by supporters of Donald Trump who laid siege to the Capitol in a failed effort to overturn Biden’s election.

As the administration assesses next steps on Biden's infrastructure proposal, White House aides have not thrown in the towel on landing a bipartisan agreement with the GOP senators, but their optimism cooled, according to Biden advisers. The group led by Sen. Shelley Moore Capito, R-W.Va., rejected Biden’s counteroffer in a sharply worded statement late last week.

Psaki insisted no decisions had been made on whether the administration will go it alone as it awaits a counteroffer from Republicans. “We’re not quite there yet,” she said. “We're eager to see their proposal and see what they have to offer.”

The GOP senators have not said if they were preparing another proposal, but kept the door open late Monday.

"I’m not ready to call it quits," Capito told reporters on Capitol Hill.