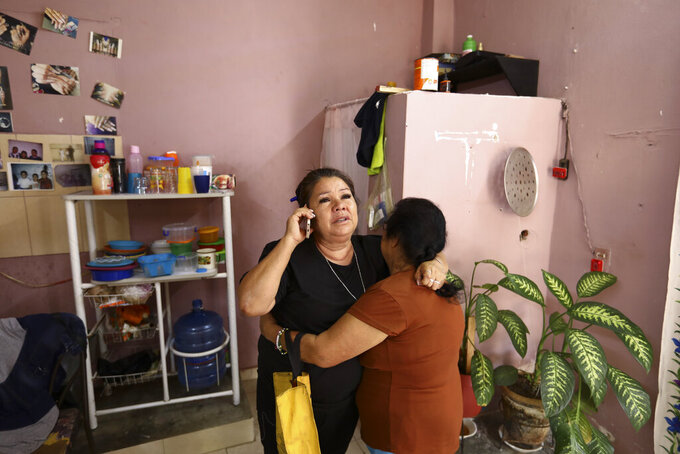 Rosa Alba Santoyo speaks on the phone and is embraced by a woman giving her condolences the day after she lost three of her adult children in an attack on the drug rehabilitation center where they were being treated, at her home in Irapuato, Mexico, Thursday, July 2, 2020. Gunmen burst into the drug rehabilitation center and opened fire Wednesday, killing 24 people and wounding seven, authorities said. After the loss of her three children, only two of Santoyo's seven children remain living. (AP Photo/Eduardo Verdugo) 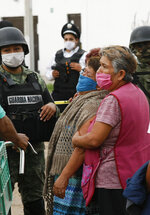 Ricardo Ortiz, mayor of the city of Irapuato in Guanajuato state, raised the death toll from 24 Thursday after two of the seven people injured in the attack died. Ortiz said the other five are out of danger.

Ortiz said there were six or seven attackers; they pulled up in two vehicles at the modest two-story house on the outskirts of Irapuato. Apparently the attackers shot every male at the rehab center, letting only the females go. Ortiz said some residents may have escaped when the attack began.

Ortiz, the mayor, said that while there are still army and national guard posted in the city, “just their presence is not enough, as long as there is no real strategy to combat organized crime in a more effective way.”

There have been persistent reports that state authorities who once tolerated the Santa Rosa de Lima gang turned in the recent years to allowing the Jalisco cartel to enter the state in hopes they would the end the local gang's systematic extortion of businesses.

Ortiz said there are almost 30 unregistered rehab centers in Irapuato. He said some function “as fronts for the cartels.”