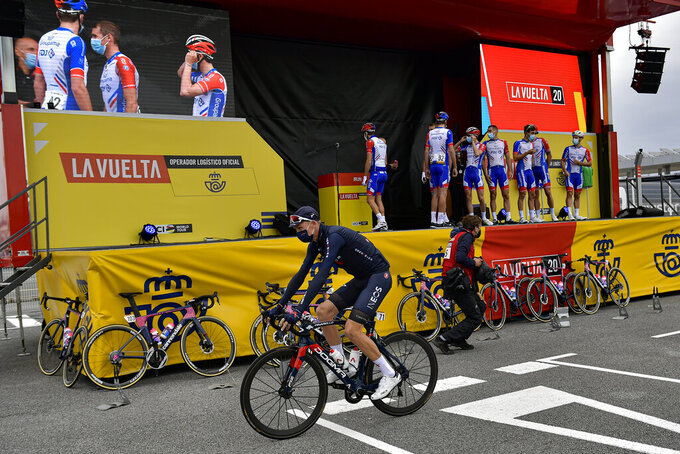 EIBAR, Spain (AP) — Defending champion Primoz Roglic attacked in the final kilometer after a difficult climb to win the opening stage of the Spanish Vuelta on Tuesday.

Roglic, the Jumbo-Visma rider who a few weeks ago lost the Tour de France on the final competitive stage, was never challenged at the line after breaking away from a small group of riders who were at the front in the final kilometers.

Two-time champion Chris Froome, in his final Grand Tour for Ineos before joining team Israel Start-Up Nation next season, had a tough time keeping up with the pace of his teammates toward the end.

It rained at times and was cold throughout the 173-kilometer (107-mile) stage from Irun and over three Category 3 peaks to the Category 1 summit finish at Arrate.

Daniel Martinez and a few other riders fell with less than 100 kilometers to go but were able to continue. Riders Mathias Frank, Alexandre Geniez and Ilan Van Wilder did not finish the stage.

The Vuelta is taking place amid tight health restrictions as Spain recently endured a surge in coronavirus cases. The race was originally scheduled for late August and early September but was postponed because of the pandemic. It is taking place at the same time as the Giro d’Italia enters its final stages. The Giro and the Tour de France also were delayed.

This Vuelta has only 18 stages instead of the usual 21. Organizers canceled plans to hold the first three stages in the Netherlands, and to have two stages go into neighboring Portugal.

A facial-recognition phone app is replacing the traditional signature of riders at the start of each stage to reduce contact with pens and surfaces, and fans have been asked not to gather at finish lines. There were many supporters along the route, though, with most wearing masks and maintaining some distance from each other.

Riders, team members and race staff will be constantly tested for COVID-19. No riders tested positive ahead of the race start, but a staff member from team Bahrain-McLaren and another from Team Sunweb were infected and had to go into isolation.

Wednesday's second stage will take riders through a 151-kilometer (94-mile) route from Pamplona to Lekunberri.