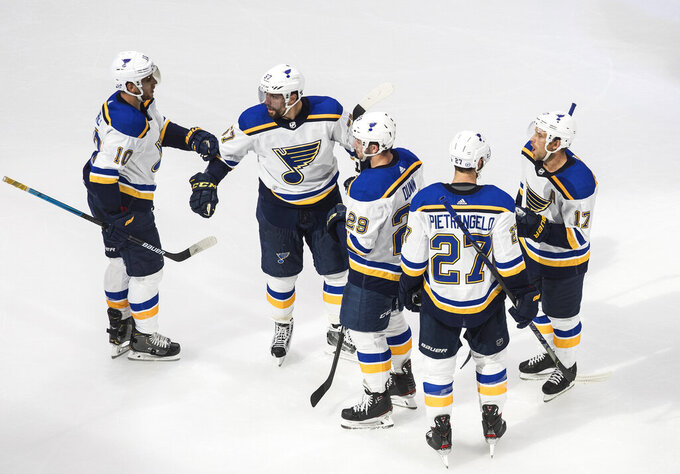 EDMONTON, Alberta (AP) — The defending Stanley Cup champion St. Louis Blues were managing their pursuit of a repeat well, carrying the best record in the Western Conference with largely the same roster.

Then, with less than a month remaining in the regular season, the global pandemic put the NHL on pause. When the Blues reconvened in Edmonton, they found nothing but trouble in the bubble.

St. Louis was eliminated in six games in the first round by the younger, faster and apparently hungrier Vancouver Canucks.

“You can’t win in this league unless you have every guy ready to go and give you his best, in the playoffs. You have to have that,” coach Craig Berube said. “Our team was successful last year because we had everybody on board every night.”

The Blues went 0-2-1 in the seeding games, playing with a touch of disinterest. They rallied from two games down against the Canucks to tie this series, but then they squandered a 3-1 lead in the second period of Game 5, lost 4-3 and never recovered.

Jordan Binnington took the net for Game 6 on Friday night at Rogers Place and fell behind 4-0 before the midpoint of the second period, pulled for Jake Allen.

“At times we looked like a junior team out there, the way we just turned the puck over, not playing the right way," a dejected center Ryan O'Reilly said after Game 6. “Yeah, it came back to bite us.”

Vladimir Tarasenko, Alex Steen, Troy Brouwer, Tyler Bozak and defenseman Carl Gunnarrsson were all hurt, or reinjured, during the series. None of them suited up for Game 6.

“We missed some guys that give us a real identity when they’re in the lineup,” said Berube, who took over early in the 2018-19 season when Mike Yeo was fired and wound up leading a turnaround from last place to the franchise's first title in a matter of seven months. “Nothing was easy here for us.”

Tarasenko, who missed most of the regular season after shoulder surgery, aggravated the previous injury and was sent home before Game 3 against the Canucks. He had no points and just 10 shots in four games in Edmonton, after totaling 11 goals and six assists during the postseason last year.

Binnington was the rookie star of the Stanley Cup run, going 16-10 with a 2.46 goals against average and a .914 save percentage in the playoffs — giving up a total of three goals in three elimination games. He led the NHL in goals against average and save percentage during the regular season, but his follow-up performance wasn't quite as sharp. Allen outperformed him in a smaller sample size and was in the net for the wins in Games 3 and 4 before losing Game 5, but Berube went with a “gut feeling” and sent Binnington back between the pipes for Game 6.

“He’s done a lot for us, and we won a championship with him, so that was my decision,” Berube said.

The defeat on Friday night could have been the final time in a Blues uniform for defenseman Alex Pietrangelo, who will be an unrestricted free agent after averaging 47 points per season over the last seven years.

Brouwer and defenseman Jay Boumeester are the other notable unrestricted free agents. Boumeester collapsed on the bench during a game on Feb. 11 and had a defibrillator implanted in his chest.

“It’s not a fun situation to be in, especially when you’ve been somewhere your whole career,” Pietrangelo said. “I guess really my only thought is to get home, see my kids, and see where the future takes us.”