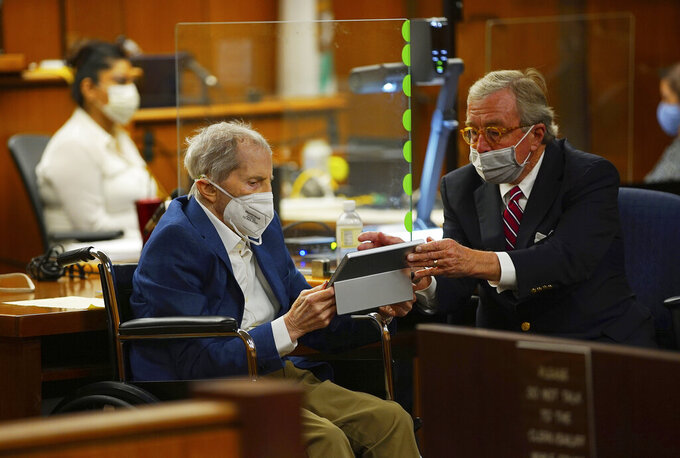 Defense attorney Dick DeGuerin, right, gives Robert Durst a device to read the real time spoken script as he appears in a courtroom as Judge Mark E. Windham gives last instructions to jurors before attorneys begin opening statements at the Los Angeles County Superior Court, Tuesday, May 18, 2021, in Inglewood, Calif. Durst, 78, is charged with one count of murder — in the killing of his best friend, Susan Berman, in 2000 in her Los Angeles home. (Al Seib/Los Angeles Times via AP, Pool)

LOS ANGELES (AP) — In a blunt rejection of what prosecutors told jurors a day earlier, a defense lawyer said Wednesday that multimillionaire Robert Durst had no motive to murder his close friend Susan Berman and had nothing to do with her shooting.

“Bob Durst did not kill Susan Berman and he doesn't know who did,” attorney Dick DeGuerin said in an abbreviated opening statement following a 14-month recess because of the pandemic. “Bob Durst had no motive and nothing to gain by the death of Susan Berman.”

DeGuerin said there was no evidence tying Durst to the Los Angeles killing in 2000 or to the disappearance of his wife in New York in 1982.

Durst, 78, is charged with one count of murder in the death of Berman, but prosecutors are using the suspected killing of his wife and Durst's admitted killing of a drifter in Texas to show his motive.

Deputy District Attorney John Lewin told jurors Tuesday that Durst silenced Berman before she could tell police what she knew about Kathie Durst's disappearance. He also said Berman had provided an alibi for Durst.

“Everything starts with Kathie Durst’s disappearance and death at the hands of Mr. Durst,” Lewin said.

But DeGuerin said there was no evidence Durst killed his wife or that Berman had helped him cover his tracks by posing as Kathie Durst in a phone call to the dean of the medical school where she was a student.

“Kathie Durst disappeared without a trace,” DeGuerin said. “It was and is a mystery."

The openings in Los Angeles County Superior Court in Inglewood were abbreviated versions of what both sides presented over four days in March 2020 before the case was halted and courts were closed amid the virus outbreak.

Lewin said Berman told friends she helped Durst by phoning in sick for Kathie Durst the day after she was last seen — providing evidence she was alive the day after her husband said he put her on train back to New York City after a weekend at their lakeside cottage.

Investigators believe she was killed at the Westchester County home and never returned to the couple's Manhattan penthouse. The Westchester district attorney's office announced Monday it is reviewing the case.

DeGuerin said Berman, the daughter a Las Vegas mobster who was a writer, was a “fabulist” who embellished stories with lies. Even her friends didn't believe what she told them.

DeGuerin said Durst would take the stand in his defense.

Durst was acquitted of murder in a Texas court after testifying he killed Morris Black when the man pulled a gun on him and they wrestled for the weapon in the Galveston rooming house where they both lived.

Durst had gone into hiding in Texas in November 2000 after Westchester prosecutors reopened the investigation into Kathie Durst’s suspected death. He killed Black because he had discovered Durst’s identity and was trying to leverage the wealthy scion to buy a house for the two of them, Lewin said.

Durst killed Black about nine months after Berman was found dead in her Benedict Canyon home in December 2000. Police were directed to the home by a note with only her address and the word, “CADAVER” written in block letters.

Durst told the makers of “The Jinx: The Life and Deaths of Robert Durst” in 2010 and 2012 that he didn’t write the note. He told the filmmakers and investigators in 2015 that whoever wrote the note had to have been Berman’s killer.

“You’re writing a note to the police that only the killer could have written,” Durst said.

Lewin said that now amounts to a confession after defense lawyers conceded before trial that Durst wrote the note. Evidence had shown he once penned a note to Berman in identical handwriting, with her address similarly misspelled “Beverley” Hills instead of Beverly.

DeGuerin said Durst discovered Berman's body when he showed up to spend the Christmas holidays with her. He “freaked out” and left and sent the note to police so she’d be found, though her body was discovered before police got the note.