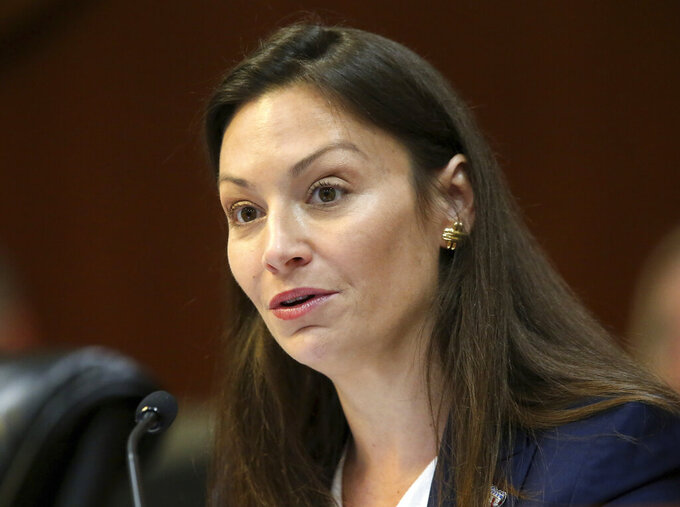 FILE - In this June 4, 2019 file photo, Commissioner of Agriculture Nikki Fried, speaks during a meeting of the Florida cabinet, in Tallahassee, Fla. Fried, the only Democrat currently holding statewide office, has teased a June 1 date to publicly announce whether she will run for Florida governor. (AP Photo/Steve Cannon, File)

Fried criticized DeSantis for trying to quash the voice of Floridians by signing bills that make it more difficult to vote, crack down on protests and make it harder for citizens to change the constitution.

“Ron DeSantis has fully embraced the right-wing agenda and authoritarian style of governing that doesn't fit in the state of Florida,” Fried said in a phone interview. “If you don't support him or the party, he's going to stop you from voting. If you disagree with him, he's going to silence you."

She made her announcement by posting a two-minute video on Twitter.

Fried, 43, is hoping to be the first Democrat to win a governor's race since Lawton Chiles was reelected in 1994. She'll face former Republican Gov. Charlie Crist, who is now a Democratic U.S. Representative, in the primary.

“Charlie is a likable guy. He's certainly been a strong advocate for his constituents in DC. I hoped that he would stay in that seat,” said Fried, who said she is concerned that Republicans can take the St. Petersburg-area seat he's giving up. “Charlie is putting his seat and our Democratic majority in jeopardy and I do believe that's a mistake.”

Fried said she's been a consistent supporter of Democratic issues.

“I've been fighting for these issues my entire life. I was doing soup kitchens and Habitat for Humanity and gay pride parades back in high school. I don't change my positions because of an election," Fried said. “I stay true to who I am.”

Fried is Florida's only statewide elected Democrat. She won her seat in 2018 by 6,753 votes. She previously worked as a public defender and as a lobbyist for the medical marijuana industry. She was elected student body president while attending the University of Florida.

While DeSantis says his decisions on COVID 19 helped the state's economy, Fried said he showed no empathy for victims of the virus.

“I would have absolutely done a mandate on masks,” she said. “It's a piece of cloth over your face. We ask people every day when they get into the car, put on a seatbelt. You can't walk into a restaurant without a shirt on. This is common sense in following the science, which he never did.”

She said the state's unemployment system failed early in the pandemic and DeSantis did little to address people's fears.

“You had people that were scared and this governor did nothing to make them feel safe. He went at this very angry, wanting to prove that he was right," Fried said. "Instead of being a governor for the entire state of Florida, he was only following the leadership of President Trump and making the pandemic response partisan and that should have never been the case.”

The Republican Party of Florida used Twitter to criticize Fried's position on the pandemic.

Fried “tried to close Florida schools and attempted to overturn Governor DeSantis’ Executive Order to get our kids back in the classroom. She is a lockdown lobbyist who can’t be trusted to make the right decisions for Florida families,” the party tweeted.