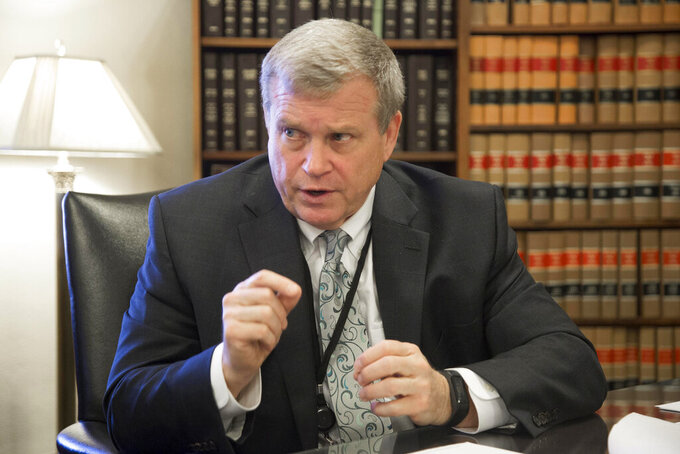 FILE - This March 1, 2017, file photo shows Idaho Attorney General Lawrence Wasden during an interview in Boise, Idaho. A congressional committee heard grievances Tuesday, June 8, 2021, against the owners of OxyContin maker Purdue Pharma amid a longshot effort to advance legislation that would keep them from using the corporate bankruptcy process as a shield for personal liability. Wasden said the Sacklers are standing in the way of seeking justice for the victims of opioid addiction and their families. (Darin Oswald/Idaho Statesman via AP, File)

A congressional committee heard grievances Tuesday against the owners of OxyContin maker Purdue Pharma as it considered longshot legislation that would keep them from using a corporate bankruptcy as a shield for personal liability.

Rep. Carolyn Maloney called two state attorneys general, opioid activists and an author to lay out the case against members of the Sackler family who own the Connecticut-based pharmaceutical giant, which has twice pleaded guilty to criminal charges related to marketing OxyContin.

Idaho Attorney General Lawrence Wasden, a Republican, said the Sacklers are standing in the way of seeking justice for the victims of opioid addiction and their families.

“The Sacklers are using Purdue’s corporate bankruptcy as a tactic to hide behind and protect themselves from personal liability and accountability,” he told members of the House Oversight and Reform Committee, addressing them remotely. “They have kept my case away from an Idaho judge and an Idaho jury.”

Facing nearly 3,000 lawsuits from state and local governments across the U.S. over the toll of opioids, Purdue filed for bankruptcy protection in 2019 as a way to reach a settlement.

As part of the bankruptcy process, debtors receive protection from lawsuits. Some bankruptcy courts, including the one in White Plains, New York, where Purdue filed for protection, also are willing to allow protections for non-debtors.

Maloney’s bill, dubbed the SACKLER Act, would prohibit the protections for non-debtors. The bill could leave family members open to facing lawsuits that more than 20 other attorneys general have filed seeking to hold them individually accountable for the opioid epidemic.

Under the bankruptcy plan being considered, Sackler family members would give up ownership of the company, with profits used to battle the addiction crisis. The family also would contribute nearly $4.3 billion over time to abate the opioid crisis and pay individuals harmed by it. That’s in addition to more than $200 million family members are paying the U.S. government in a separate settlement over opioids.

In a statement Tuesday, branches of the Sackler family who own Purdue said many state and local governments support the settlement proposal and that it will go further to solve the epidemic than individual lawsuits.

“Were litigation to resume, we are confident the evidence would show that members of the Sackler family who served on Purdue’s board alongside respected outside directors acted ethically and lawfully,” they said in the statement.

States are divided on whether to accept the plan. They and other debtors -- local governments, individuals injured by opioids and others -- are starting to vote on it. But it will be a bankruptcy court judge who decides its fate.

Massachusetts Attorney General Maura Healey, the first official to sue the Sacklers, told the committee she would like to see the bill adopted before an Aug. 9 hearing on Purdue’s restructuring proposal.

“They’re an incredibly wealthy family that’s been able to buy off lobbyists and lawyers and PR campaigns, and now is trying to buy relief by offering something in a bankruptcy proceeding,” said Healey, a Democrat.

Maloney, who chairs the Oversight Committee, acknowledged during a news conference Tuesday that passing the bill is not a certainty and hoped that the hearing would rally Republican support.

“You always have hope,” she said.

Republicans on the committee seemed less interested in her bankruptcy bill than in targeting another factor contributing to the opioid crisis, which has been linked to the deaths of nearly 500,000 Americans over the last two decades and has deepened since the coronavirus pandemic began. They used the hearing to say the U.S. needs to focus on stopping fentanyl and other deadly synthetic opioids at the border with Mexico.

Rep. James Comer, a Kentucky Republican, noted that Maloney's bill wasn’t assigned to the Oversight Committee, but rather the Judiciary Committee, where it has not been up for a hearing. He said Democrats, who control the House, Senate and presidency, could pass the bill on their own.

“If you want to pass the SACKLER Act, bring it up for a vote,” he said. “Why are you yelling at Republicans? We agree that the Sackler family should be held accountable.”

Comer and every other Republican lawmaker who spoke at the hearing called for Democrats to take action to secure the border, a message that some witnesses criticized as changing the subject.

“You are missing an opportunity to hold the Sacklers responsible,” said Alexis Pleus, who told the committee about how her son died of an overdose in 2014 years after becoming addicted to OxyContin that he was prescribed to reduce pain from a high school football injury.