Despite revenue hike, Marlins' emphasis will be on prospects 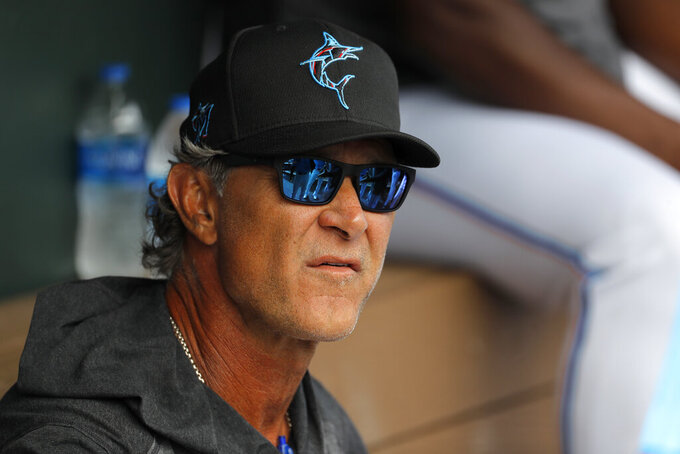 FILE - Miami Marlins manager Don Mattingly looks on from the dugout prior to a spring training baseball game against the Washington Nationals in Jupiter, Fla., in this Tuesday, March 10, 2020, file photo. Mattingly's job remains to develop young talent so an underfinanced team can overachieve. He considers his ability to relate to players one of his strengths, perhaps because he was an overachiever himself. (AP Photo/Julio Cortez, File)

There will be no immediate spending splurge, however.

“We have done a pretty good job of loading up our minor league system with a lot of prospects, and we’re going to give them an opportunity to play,” Jeter said Wednesday. “When we get to the point where we’re trying to fill some holes, we’ll do that.”

Jeter's comment came shortly after the team announced that Marlins Park has been renamed loanDepot park in a multiyear agreement. LoanDepot, which already had a partnership with MLB, provides loans and is based in Southern California.

The Marlins also recently signed a TV contract that more than doubles their previous agreement, which was $20 million a year. Financial terms of the ballpark naming agreement weren't disclosed.

The Marlins have operated with budget constraints and a small payroll for most of their history. They have not previously had a naming rights agreement for their ballpark, which opened in 2012.

Miami begins its season Thursday at home against Tampa Bay with a promising young team. Among the organization's most highly touted prospects is right-hander Sixto Sanchez, but because his spring training progress was slowed by a visa issue and a false positive COVID-19 test, he didn't make the opening day roster.

He was scheduled to throw Thursday and then pitch in one more practice game, meaning his first 2021 start for the Marlins could come about 10 games into the season.

“He wasn’t quite ready because of circumstances beyond his control,” manager Don Mattingly said. “It's just a matter of getting him built up.”

Another prospect who will make his first opening day start is 23-year-old Jazz Chisholm, who won the second base job in spring training.

“This guy is capable of doing a lot,” Mattingly said. “As he puts his whole package together, this is a superstar. This isn’t like a good player; he has a chance to be a great player.”