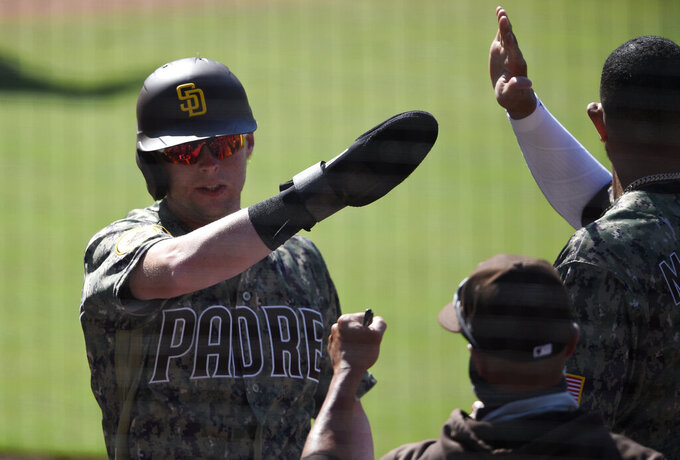 San Diego Padres' Jake Cronenworth is congratulated after scoring during the eighth inning of the team's baseball game against the Arizona Diamondbacks in San Diego, Sunday, July 26, 2020. The Diamondbacks won 4-3. (AP Photo/Kelvin Kuo)

SAN DIEGO (AP) — Ketel Marte hit a go-ahead sacrifice fly off struggling Kirby Yates on Sunday, and Arizona rallied for four runs off San Diego’s vaunted bullpen to earn a 4-3 victory after the Diamondbacks' Torey Lovullo became the first manager to be ejected in the COVID-19 era.

The Padres had been MLB’s last undefeated team after St. Louis and Houston lost earlier in the day.

San Diego’s Garrett Richards left with a 1-0 lead after holding Arizona to one hit in five innings, but the Diamondbacks, who struggled offensively in their first two games, came alive three innings after the masked Lovullo was ejected for arguing with plate umpire Mark Ripperger, who wasn’t wearing a cloth facemask.

“Today was a great win for this team,” Lovullo said. “We’ve been grinding, that’s not a mystery. Started to see us come back to life and do what we do well. ... It was how we won, one of those special wins that give you a little push, a little momentum. Right now my brain is spinning pretty fast.”

Padres newcomer Emilio Pagán blew the lead in the eighth by allowing the first three Diamondbacks to reach. Marte walked, advanced on David Peralta’s single and scored on Starling Marté's single to right. Another run came in on Eduardo Escobar’s double-play ball.

The Padres tied it in the bottom half after Eric Hosmer and Wil Myers drew consecutive walks off Andrew Chafin. Jake Cronenworth, who made his MLB debut as a pinch-runner for Hosmer, advanced on Jurickson Profar's fly ball to center and scored on pinch-hitter Greg Garcia’s single to center off Archie Bradley (1-0).

Bradley got designated hitter Josh Naylor to pop up and then ended the threat by striking out Fernando Tatis Jr., who slammed down his bat as he walked away.

Yates (0-1), who had a major league-high 41 saves last year, entered in the ninth and retired Carson Kelly before loading the bases on a single and consecutive walks. Ketel Marte hit a sac fly and Peralta followed with an RBI single.

The Padres beefed up their bullpen in the offseason with the addition of Pagán and Drew Pomeranz, among others.

Manager Jayce Tingler said he has “zero issues, zero fears” about the bullpen.

“When you’re carrying a 1-0 lead, you expose yourself, especially with those hitters over there, as skilled as they are, they provide a lot of tough matchups," Tingler said. "When you’re holding onto a 1-0 lead, anything can happen and unfortunately it didn’t go our way today.”

The Padres had the bases loaded with two outs in the first and failed to score. In the second, Diamondbacks first baseman Jake Lamb made a nice diving stop of Trent Grisham's grounder to end the inning and save a run.

Cronenworth hit an RBI double in his first big league at-bat, but Bradley retired Myers to end the game.

Peralta made a sensational running catch of Tommy Pham's fly ball to left for the second out of the ninth.

“It was just a matter of time for everything to go the way we wanted,” Peralta said.

In the fifth, Arizona’s Kevin Cron was hit on the left elbow by a pitch from Richards. Ripperger didn’t award him first base, either believing he leaned into it or didn’t try to get out of the way. Kron wears a protective pad on the elbow.

A masked Lovullo came out to argue, and at first seemed to keep a safe distance from Ripperger. The umpire took off his protective facemask but was not wearing a cloth facemask. He ejected Lovullo and then turned his back on him. Lovullo followed for a few steps but then headed to the dugout.

“It was a quick judgment call,” Lovullo said. “I didn’t believe we saw it the same way. Obviously I got a little frustrated. He explained to me that Kevin leaned into the ball and exposed the elbow. I told him if it was going to be a strike I could have lived with it a little more. ... I just became a little frustrated by his explanation and went a little too far with it, and that’s on me."

“I asked the umpire to make sure he stayed away from me,” Lovullo said. “That was the most important thing for me. I remember my mask riding up on my face and I felt very uncomfortable. I felt it was my responsibility to cover my face up. ... I was very mindful of the space that needed to be created.”

Cron ended up striking out.

Richards struck out six and walked three. He signed a two-year deal in free agency in December 2018 even though he was coming off Tommy John surgery. He made three starts last September.

Hosmer, who has struggled to hit the ball in the air in previous seasons, homered to center field on a 2-2 pitch from Zac Gallen with two outs in the third inning.

Hosmer drove in six runs on two bases-clearing doubles in a 7-2 victory on Friday night, but missed Saturday night’s 5-1 win with an illness.

Diamondbacks: RHP Luke Weaver is scheduled to start the series finale Monday afternoon. He is 2-3 with a 2.27 ERA in six career starts against San Diego.

Padres: Tingler said LHP Joey Lucchesi will start Monday, or he will go with an opener. Lucchesi went 10-10 with a 4.18 ERA in 30 starts last year.