Did someone say impeachment? Biden avoids wading into debate 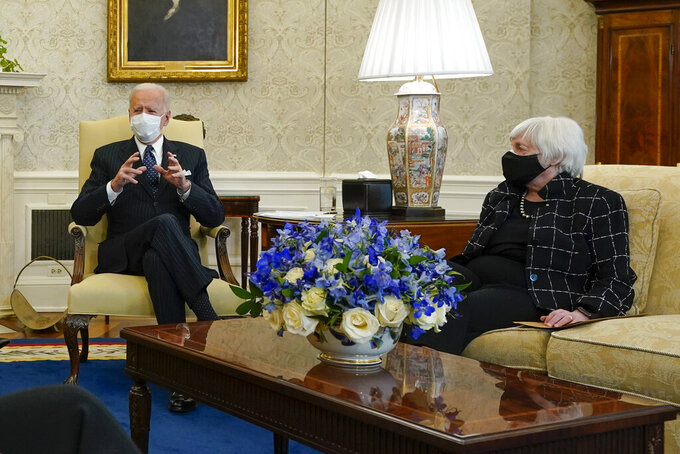 But as the traumatic video footage from Jan. 6 grips viewers of the impeachment trial of former President Donald Trump, there is one place where, publicly, the trial is being studiously ignored: the White House.

President Joe Biden stressed to reporters in advance that he would not be watching the proceedings and his team’s message is clear: Their focus is on the business of governing and not the historic events unfolding at the other end of Pennsylvania Avenue.

White House press secretary Jen Psaki has dodged question after question about the trial, declining to offer Biden’s opinion on the proceedings. And Biden’s calendar this week is meant as counterprogramming to the trial: events focused on getting aid to those suffering amid the COVID-19 pandemic and bolstering vaccine distribution to control the virus.

The message discipline reflects both the political and practical realities of the moment for the president.

Privately, White House aides note that the president would gain little politically from weighing in on the trial and that any comment he makes would draw the focus away from his predecessor’s misconduct and onto Biden’s own views.

And they say that, on a practical level, staying above the fray allows Biden to focus on his COVID-19 relief package and remain on cordial terms with Republicans as he tries to steer the $1.9 trillion bill through Congress.

“Presidents have their peak political capital immediately after they’re elected, and they need to decide what to spend it on. Containing COVID is President Biden’s No. 1 priority, so I don’t think it’s a surprise that that’s where the focus has been and will remain until that package has passed,” said former Obama campaign press secretary Ben LaBolt.

LaBolt also noted that if Democrats' ultimate goal is to win GOP support for indicting the president, it's unlikely that “having President Biden out there continuing to make statements about impeachment would serve that effort.”

Among some Biden aides, there is a sense that the president will need to weigh in at the end of the trial, particularly if an expected acquittal prompts Trump to break his silence and further inflame a deeply divided nation.

For now, however, the White House’s public approach to the proceedings has been: Impeachment? What impeachment?

“I am not,” Biden said when asked if he would be watching the trial. “Look, I told you before: I tell people that I have a job. ... The Senate has their job and they are about to begin it, and I am sure they are going to conduct themselves well. And that’s all I am going to have to say about impeachment.”

Psaki at times has all but twisted herself in knots at the White House podium to dodge saying much of anything about the trial, simply referring to Biden’s previous condemnations of the Jan. 6 riot and past criticisms of Trump.

“Joe Biden is the president. He’s not a pundit. He’s not going to opine on back-and-forth arguments, nor is he watching them,” she said Tuesday.

On Wednesday, she insisted that Biden would “not be a commentator” and would instead focus on jump-starting the vaccination program and getting his COVID-19 relief bill through Congress.

He met with Treasury Secretary Janet Yellen and business leaders on Tuesday to push for his economic recovery package. On Wednesday, he announced sanctions on Myanmar's military regime in the wake of the coup there and then visited the Pentagon. On Thursday, he planned a trip to the National Institutes of Health to discuss the nation’s vaccination program.

White House aides knew the president’s events would be overshadowed by the proceedings in the well of the Senate, but wanted to be certain to show Biden working and driving home the contrast with his predecessor on trial.

It's all in keeping with Biden’s overall approach to Trump throughout the 2020 campaign: Avoid getting bogged down in each new attack or controversy from the president and stay focused on his own overarching message about a return to competent leadership in the White House. It also reflects a belief among White House aides that the chattering classes in Washington and on Twitter are often far removed from the realities of everyday Americans.

“I think the biggest news story for most Americans is getting the virus under control, and President Biden has shown, both on the campaign trail and in the White House, that his focus is what the American people are waking up thinking about every day,” LaBolt said.

With the Senate occupied by impeachment, White House legislative affairs staffers were working with House committee members on crafting the massive COVID-19 legislation.

But while the administration’s outward focus was on the pandemic, the trial was inescapable within the West Wing.

The televisions mounted on office walls were tuned to cable news channels broadcasting the proceedings for hours on end. Aides kept one another updated and briefed the president. And preliminary work was underway for Biden to weigh in at the end of the trial in an effort to lower the temperature of a divided nation overheated by Trump.

Biden’s public silence during the trial was echoed by Trump, whose Twitter account has been suspended and who followed aides' advice to keep a low profile for fear of endangering an acquittal.

In Trump’s previous impeachment, a year ago, he relentlessly weighed in on the trial on Twitter and mixed in a variety of events. The prior president to be impeached, Bill Clinton, also made a show of focusing on his day job, scheduling a flurry of events opposite the 1999 trial that ended up improving his approval ratings.

The clearest historical precedent for the moment in which Biden finds himself may be that of President Gerald Ford seeking to unify the nation after the damaging Watergate scandal and Richard Nixon's resignation. Like Biden, Ford sought to move the country past his predecessor in part by ignoring him and focusing on his own agenda. In a move that was controversial at the time but one that presidential historian Jeff Engel said was ultimately seen as beneficial for the national mood, Ford pardoned Nixon.

Engel suggested that Biden continue to focus his message on Americans, rather than wade into fights on Capitol Hill.

“Joe Biden, I think, will by his very nature feel responsible for and speak to Americans of all stripes," he said. “That’s not going to cure our problems by any measure, but it will provide a balm, if you will, to allow things to quiet down.”