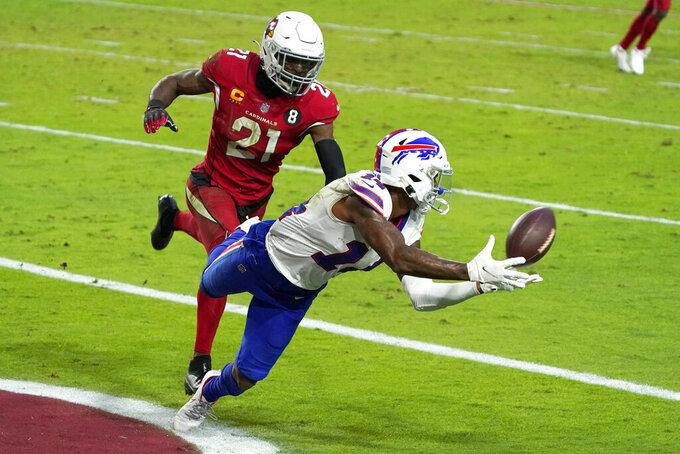 The Bills receiver gave a nod to Rick James by having the Buffalo-born funk artist’s likeness painted on his cleats in a 44-34 win over Seattle on Nov. 8. It was a game in which Diggs finished with nine catches for 118 yards, his second-highest total in his first season with the Bills after being acquired in a trade from Minnesota in March.

Diggs comes up with a fresh design for his cleats for each game based on where it’s played, and the James idea struck him after a trip to the dentist, of all places.

James, who changed his name from James Ambrose Johnson Jr., was born and grew up in Buffalo. He died of heart failure at the age of 56 in 2004, and is buried in Buffalo’s historic Forest Lawn Cemetery.

Diggs certainly hasn’t had to borrow a line from another James’ classic, “Give It To Me Baby,” based on his eye-popping production.

The sixth-year player leads the NFL with 73 catches and 906 yards through 10 games for the AFC East-leading Bills (7-3), who entered their bye this week.

Diggs is in position to shatter several single-season franchise marks. Eric Moulds holds the Bills’ records for yards receiving (1,368 in 1998) and catches (100, in 2002).

The memorabilia collection of Upton Bell, a long-time pro football historian and son of former NFL Commissioner Bert Bell, has been acquired by University of Massachusetts.

The Special Collections and University Archives (SCUA) at the University of Massachusetts Amherst Libraries has developed a public exhibition and website to share a selection of items from the collection.

“It is a massive project over three years done by one of the leading college libraries in the country," Bell said. “This is the real history of the college and pro game through the Bell Family’s eyes . It has many aspects to it, including my interview with President George H.W. Bush, as well as an eight-part series on the history of the sport over 80 years.”

Upton Bell, whose father was the commissioner from 1946-59, began his career in professional football in the early 1960s working at the Baltimore Colts training camp and ticket office. He advanced to head scout by the late 1960s and served the franchise through two NFL titles and two Super Bowls, winning the game in 1971.

He later was hired as general manager of the Boston Patriots, encouraging their name change to the New England Patriots. Bell also was a broadcaster in Boston and is the author of “Present at the Creation: My Life in the NFL and the Rise of America’s Game.”

There are more than 125 items documenting the Bells’ lives in professional sport.

“Upton Bell’s artifacts bring the history of college and professional sports to life,” says Kirstin Kay, sport innovation archivist for SCUA. “Bell’s collection of personal items amassed over his long career provide a rich, tactile complement to our other research collections in sport, innovation and entrepreneurship.”

The Los Angeles Rams and several local chefs raised more than $100,000 for the Los Angeles Food Bank in a virtual event Monday night.

The annual Taste of the Rams event was held online due to the coronavirus pandemic, but still attracted more than 400 ticket-buying Angelenos with charitable contributions to the Food Bank, which feeds more than 900,000 people each month. The event typically allows charitable fans to mingle with Rams players while enjoying a tasting menu prepared by local chefs.

Chan Gailey says NFL offenses have changed a lot since 2001.

That’s the last time the Miami Dolphins (6-3) had as good a record through nine games. Gailey came out of retirement this year to take the job as Miami’s offensive coordinator. He held the same position in 2001, when the Dolphins had Jay Fiedler at quarterback, Lamar Smith at running back and a strong offensive line.

“They were tough football players, really tough,” Gailey said. “But you had to be. It was more of a ‘Let’s run it down your throat’ mentality then. Now it’s, ‘Let’s spread it out and throw it around the park.’”

SALUTING THE OC THROUGH AUSTIN POWERS

Last week, Green Bay quarterback Aaron Rodgers said there’s nobody in the Packers facility that “brings me more joy or is more fun to be around than Nathaniel Hackett.” Rodgers celebrated his first touchdown run Sunday with a unique celebration that served as a tribute of sorts to Green Bay’s offensive coordinator.

After his 5-yard touchdown in a 24-20 victory over Jacksonville, which fired Hackett as offensive coordinator in 2018, Rodgers stretched his arms as wide as possible and yelled “I love gold,” repeating a comment made by the villain in the movie “Austin Powers in Goldmember.” Rodgers said on SiriusXM Radio’s “The Pat McAfee Show” that Hackett is a big Austin Powers fan.

Hackett confirmed that Thursday in his weekly Zoom session with reporters. Hackett noted that the Packers refer to the red zone as the “gold zone.”

“Goldmember is one of those guys that, he loves gold,” Hackett said. “And I think that you’ve got to respect somebody that really loves gold. And for us, when you get inside the 20-yard line, you have a chance to score touchdowns. The more touchdowns we score, everybody gets gold.

“It’s something that we’ve kind of built on throughout the past two years. I’ve always looked at third down, a lot of people call it the money down, but we like to get the gold down there. It’s just kind of evolved into this fun and exciting experience, so that once everybody gets into the gold area, they’re thinking about getting the gold.”