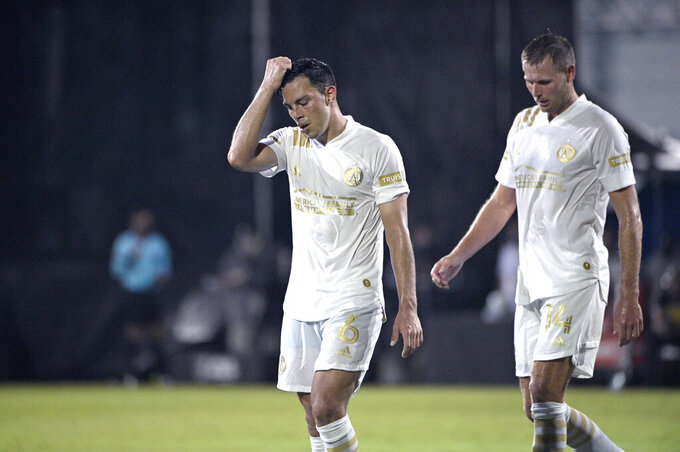 FILE - In this July 11, 2020, file photo, Atlanta United defender Fernando Meza (6) and forward Adam Jahn (14) react after a play during an MLS soccer match against the New York Red Bulls, in Kissimmee, Fla. The first three seasons went so smoothly for Atlanta United. Championships. Trophies. Record crowds. Which is why the current state of affairs is so shocking. United hasn’t won a game _ or even scored a goal _ in more than five months. (AP Photo/Phelan M. Ebenhack, File)

Sure, there were a few hiccups along the way, but the club quickly established itself as one of Major League Soccer’s flagship franchises, a model that was held up to others as the way to do things the proper way.

Which is why the current state of affairs is so shocking.

United hasn’t won a game — or even scored a goal — in more than five months. A four-game losing streak over all competitions is the longest in team history. An interim coach is now running the team.

While the coronaviruis pandemic has made this a season like no other, it’s clear that things are amiss in the A-T-L.

“Everybody, across the board, kind of needs to look at themselves and re-calibrate,” said 37-year-old Jeff Larentowicz, who has been with the team since its inception in 2017.

Atlanta United hopes to at least start showing signs of improvement when it returns to the field Saturday night at fan-less Mercedes-Benz Stadium for Phase 2 of the MLS reopening against expansion club Nashville.

“We want to get back to scoring goals, get back being an exciting team," goalkeeper Brad Guzan said. "Make it a scary thing when teams see they're playing Atlanta United.”

The year started promisingly enough — an opening-round triumph in the CONCACAF Champions League, followed by a season-opening road win against MLS newcomer Nashville. But in that game, the club sustained a devastating blow when 2018 league MVP Josef Martinez went down with a season-ending knee injury.

Without Martinez, United managed to win its league home opener against one of MLS' weaker teams, knocking off Cincinnati 2-1 on March 7 before a crowd of more than 69,000 at Mercedes-Benz Stadium.

That is the club’s most recent victory.

Atlanta was blown out by Mexican powerhouse América 3-0 at Estadio Azteca in Mexico City in the opening leg of the Champions League quarterfinals, then the season shut down for more than four months because of the pandemic.

When play finally resumed at the MLS Is Back tournament in central Florida, Atlanta United no longer resembled one of the league’s dominant teams. Instead, coach Frank de Boer sent out a squad that was all out of sync and unable to generate the sort of exciting, attacking style that was the hallmark under previous coach Tata Martino.

“We weren’t playing as a group,” goalkeeper Brad Guzan said. “That was obvious to everyone who was watching."

De Boer got the boot not long after the team got back to Atlanta. Though it was described as a mutual decision, all of the players know this was a firing.

“When you have the results we had, and knowing the standard that Atlanta United has set for ourselves as a club, something had to change," Guzan said.

Enter Stephen Glass, a 44-year-old Scotsman who is running the club on an interim basis while it searches for a full-time replacement.`

Glass is pushing the team to get back to the way it played under Martino.

“We have an abundance of talent to score goals,” he said Thursday. “We're trying to make them more forward-thinking, where our first thought is, ‘Can we go score? Can we beat the other team?’ I think we have better players than a lot of other teams. We've got to use them.”

Taking over a team that won the 2018 MLS Cup title, de Boer struggled to convey his vision of a possession-oriented style. He came across as aloof and unwilling to change, never really gaining the acceptance of his players.

Even so, de Boer's initial season could hardly be called a failure, with victories in the U.S. Open Cup and Campeones Cup before a run to the conference final in the MLS playoffs.

But de Boer’s shortcomings, combined with several front-office moves that have not gone according to plan, have hit the club hard in 2020.

Pity Martinez and Ezequiel Barco have yet to play to the standard expected from two of the club’s most expensive acquisitions, and many wonder if they ever will. No one has stepped up to fill the scoring void left by Martinez’s injury, and there’s little reason to believe that two stop-gap acquisitions, Jürgen Damm and Erick Torres, will spark a major turnaround.

The bravado that marked Atlanta United’s first three seasons has been replaced by a hefty dose of reality.