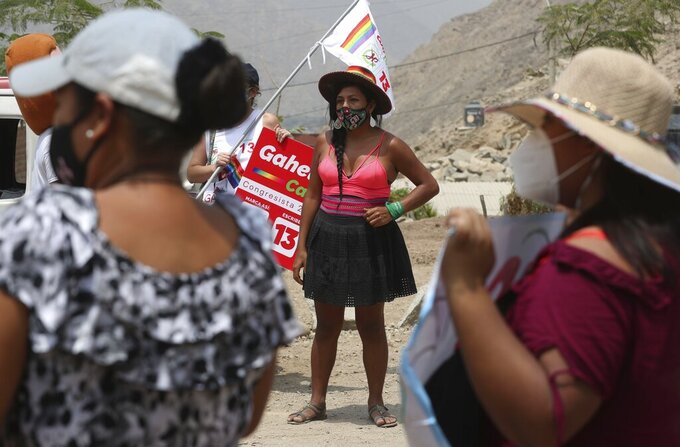 Together for Peru transgender congressional candidate Gahela Cari, campaigns in the Casachacra shanty town on the outskirts of Lima, Peru, Saturday, March 27, 2021. Like virtually all political candidates, Cari has had to face off attacks over her proposals during her campaign for a seat in Peru's congress, but unlike the rest, she has also had to fend off transphobic harassment. (AP Photo/Martin Mejia)

MEXICO CITY (AP) — The attack on Gahela Cari came following a televised political debate in the form of a searing tweet from her opponent. Attached to it was an image of her Peruvian elections registration with her names and gender given at birth, all of which she no longer identifies with, highlighted in red.

Many defended Cari, who is running for a seat in Peru's Congress, but the tweet also garnered hundreds of likes and supportive comments. “Seriously, I don’t see where the discrimination is,” one person replied.

Like most political candidates, Cari has faced attacks over her campaign proposals, but unlike the rest, she has had to fend off transphobic harassment in a socially conservative South American country with culturally entrenched discrimination against transgender people. Just last year, police officers forced a group of trans women to yell: “I want to be a man.”

“It is extremely necessary for us to raise our voices, fight for our own representation within decision-making spaces,” Cari, 28, said ahead of Sunday's elections. “I hope that, at some point, it is not news that a trans woman wins a seat in Congress or an award."

A report last year by a university in Peru registered 170 cases of rights violations of LGBT people in 2019, but researchers acknowledged that is a significant undercount. Of those cases, 73 involved attacks against trans women.

The report from the LGBT Rights Observatory of the Universidad Peruana Cayetano Heredia accused government agencies, including police, of being the main violators of rights based on sexual orientation and gender identity. It described filing a violence or discrimination complaint at a police station as walking into “the mouth of the wolf.”

In Peru, an Andean nation of 32.2 million people with a long Pacific coast, churches and state are intricately linked, with a strong presence of religiously affiliated organizations and the increasing political participation of evangelicals promoting traditional family formats. The groups are behind movements like the “Do Not Mess With My Children” campaign, an effort against a sex education school curriculum advocating gender equality.

“Discrimination is part of everyday life throughout Latin America, with better conditions in some countries than in others, and I think it comes from a shared cultural star,” said Alessia Injoque, director of the Chile-based Fundación Iguales, which advocates for the rights of LGBT people. “All societies in Latin America come from a strong heritage of Christianity, where men and women were defined based on our genitals."

Peru's transgender people were even caught in the coronavirus crossfire when early in the pandemic the government implemented a gender-based, stay-at-home measure designating specific days for men and women to leave their homes. Officers were accused of asking trans women for their national identification cards to verify their gender. In an April incident, police ordered three trans women to do squats on the street and yell that they wanted to be men.

Despite lobbying by activists, Peru does not have a law allowing people to administratively change the name and sex on their national IDs. A congressional committee approved a bill on March 29 that would make this possible, but it must still be approved by the full legislature. The committee’s approval came months after a court ordered the national records agency to within a year design a process allowing people to change their names, genders and photos on official documents.

The court said the absence of an administrative process constitutes a “systematic violation of the right to equality and non-discrimination, the right to identity and legal personality, (and) the right to dignity” and disregards the standards set by an opinion of the Inter-American Court of Human Rights.

Currently, people instead must go through a lengthy and expensive judicial process to make the change, including a psychological evaluation, a criminal background check and witness interviews.

Gabriela Mariño, 63, is a longtime activist who runs a community center in the country’s capital, Lima, geared primarily to trans women. She says she followed the process, but her case stalled when a judge ruled that her witnesses were not credible.

Long before hormone therapy became an option in Peru, Mariño used to help trans women achieve their desired appearances as a hair stylist. She had abandoned her dream of becoming a lawyer in the 1970s, when a university official called her a slur and denied her a chance to register for the law school’s admissions exam.

Mariño, who lobbied for the name change bill, said getting national IDs with their true gender identities and names would allow trans men and women to get better jobs.

Mariño recalled how a woman she assisted dropped out of college fearing she would never be hired if her ID and diploma showed her former name. Instead, she continued to be a sex worker. In 2020, the woman was diagnosed with cancer and died this year, but not before her family coerced her to return to her rural community and took away her dignity, Mariño said.

“(Her mother) sat her on a chair and cut her hair really short like a man. Why? Because only that way was she going to enter the Kingdom of Heaven,” Mariño said. “It hurt my soul to see it because she even posted it on Facebook, and she buried her with her name as a man.”

Cari’s campaign proposals include creating a protocol for health care services for trans people and establishing anti-bullying measures in schools. She also wants a National Law on Comprehensive Sexual Education encompassing elementary school through college, which she said would reduce violence and discrimination against women and the LGBT community.

This is the second time in as many years that Cari has run for Congress. Her attempts follow those of two other trans women over a decade ago. The women’s defeats several years apart may show Peru’s lack of progress toward gender equality but, Cari said, it takes time for a country to shake off the vestiges of colonialism.

“It seems that since their campaigns, it has been a long time, but it is not like that,” she said. “No, in reality, it is a very short time compared to the centuries, the decades, the years that trans people have lived and been made invisible, beaten and violated.”