Doctors in Hungary question reopening amid spike in deaths 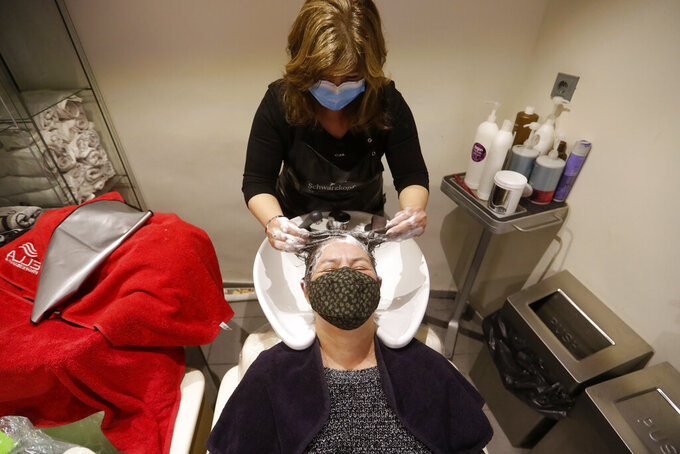 Hairdresser Andrea Roder washes the hair of a client in Budapest, Hungary, Wednesday April 7, 2021. Hungary's government lifted several lockdown restrictions on Wednesday, even as some doctors and medical experts urged caution after a record-breaking day of COVID-19 deaths, a move that came as Hungary reached 2.5 million first-dose vaccinations, a benchmark the government set for when a gradual reopening could move forward. (AP Photo/Laszlo Balogh)

BUDAPEST, Hungary (AP) — Doctors in Hungary are questioning the government's decision to lift some lockdown restrictions amid peaking COVID-19 infections and deaths, saying that could lead to an even more dire situation in the Central European nation.

Shops and services were allowed to reopen Wednesday after 2.5 million people received a first dose of a coronavirus vaccine, a benchmark the government set for when a gradual reopening could take place. Hungarian officials say the number of administered vaccines, rather than trends in infections and deaths, will determine the country's strategy for lifting its lockdown.

“Closures can only limit the spread of the virus. The government ... decided weeks ago that any reopening measures would depend on the number of vaccinations," Prime Minister Viktor Orban’s chief of staff, Gergely Gulyas, told reporters on Thursday.

Additional restrictions could be lifted within a week, he added, saying that more than 4 million in Hungary could receive a first vaccine dose by the end of the month.

Yet some in Hungary’s medical community have criticized the reopening as premature and based on arbitrary criteria when new infections and virus deaths are soaring.

“They shouldn’t measure the severity of the situation with (vaccination) numbers but with how overwhelmed the hospitals and intensive care wards are,” Dr. Zsombor Kunetz told The Associated Press. “The government has now come up with its own metric that is not in line with the severity of the pandemic at the moment.”

Hungary has had the worst death rate per 1 million inhabitants in the world in recent weeks, according to Johns Hopkins University, and has seen 22,681 deaths in the pandemic.

The lifting of restrictions on Wednesday — which included extending shopping hours and pushing the start of an overnight curfew back two hours — coincided with a new daily high of 311 deaths and followed a record number of fatalities last week.

The Hungarian Chamber of Doctors said the decision to lift restrictions had come “too early,” and urged Hungarians to remain vigilant and avoid public areas despite the “false sense of security” provided by the economic easing.

Some doctors argued that using the number of vaccinations to guide reopening is a flawed strategy that could result in another deadly surge.

“In my opinion, this reopening was a rushed and completely wrong decision,” said Dr. Zoltan Komaromi, a physician in the capital of Budapest. “This 2.5 million number is a complete surprise for us, because no epidemiological textbook or guideline says that vaccinating a quarter of the population comes with any kind of epidemiological results.”

Komaromi, who is also a health spokesman for an opposition political party, said the government had used political considerations to guide its pandemic policies rather than scientific guidelines.

“That’s why the last three or four measures have had no effect on slowing or reducing the pandemic. The curves are going up just as steeply,” Komaromi said. "May God bless the Hungarians, so that as few people as possible die as a result (of these policies).”