Don't be a 'cow on ice': Sliding key to French Open success 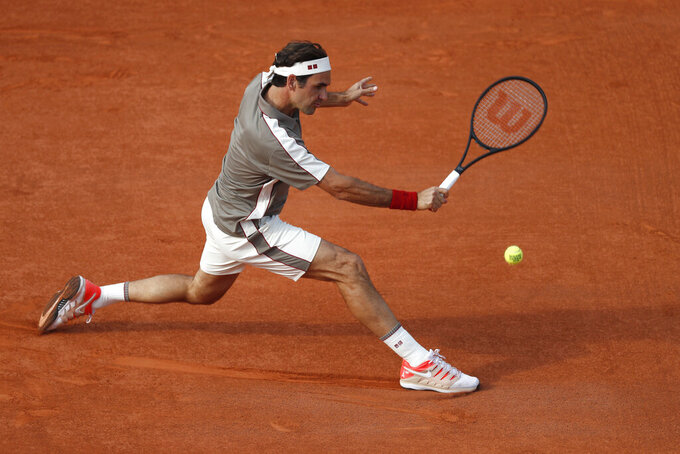 FILE- In this Tuesday June 4, 2019, image, Switzerland's Roger Federer plays a shot against Switzerland's Stan Wawrinka during their quarterfinal match of the French Open tennis tournament at the Roland Garros stadium in Paris. The skill of sliding at Roland Garros is on hold at the moment with the start of the French Open postponed until September because of the coronavirus, but sliding will still be one of the keys to success at the French Open whenever it is played. Federer returned to clay-court tennis in 2019, a decade after his French Open title with his confidence low, he explained, “because I don’t even remember how to slide anymore.” (AP Photo/Jean-Francois Badias, File) 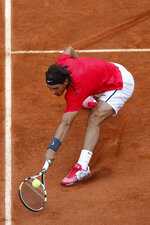 Before Roger Federer briefly returned to clay-court tennis in 2019 — a decade removed from his French Open title — his confidence was low, he explained, “because I don’t even remember how to slide anymore.”

Before Maria Sharapova figured out the necessary footwork to claim two trophies in Paris, she joked the rust-colored surface made her look like “a cow on ice.”

And anyone who’s ever seen Rafael Nadal play on clay knows his ability to glide along the ground to reach shots others can’t is as big a reason for his record 12 championships at Roland Garros as his bullwhip of a forehand or his unflagging spirit.

One of the common sights at the French Open, postponed from now until September because of the coronavirus pandemic, are the marks left in the clay by sliding players. A big secret to success on the surface is the skill of the slide, which involves getting into position to hit a ball and quickly changing directions for the next shot.

“Clay-court tennis requires a blend of aggression with patience and tactics and physicality. If you’re a natural mover, as Nadal is on this surface, that’s not something that has to come into your focus. If you’re not ... it’s so different from what you’re used to playing on predominantly, a hard court, where your footing is secure,” said Jim Courier, a four-time major champion. “Clay requires a bit of a different mindset. You have to be ready to hit that extra shot. You have to be ready to slide, dig in, play some defense.”

In the nearly 30 years since Courier’s titles at Roland Garros in 1991-92, only one other French Open was won by an American man, Andre Agassi in 1999.

More often it is someone from Europe — usually Nadal, of course — or South America, such as Gustavo Kuerten.

“I was lucky to be raised in Florida, where the bulk of the tournaments you play as a youngster are on the green clay,” Courier said. “So I learned how to slide at a very early age. For me it was very natural. I had no issues with it, no mental hang-up at all.”

Same for someone like Novak Djokovic, who has turned sliding on all surfaces into an art form.

Not so for those who came to clay later in life.

“No. Not at all,” she said. “I remember falling all over the place.”

“My first few coaches, we worked on it — even how not to get hurt when you’re sliding,” Puig said, knocking on a table.

James Blake, a retired American player who reached No. 4 in the rankings, said he never felt comfortable with the kind of movement required for clay.

During a practice session in Rome in 2004, Blake tried sliding to reach a ball but his foot got caught and he slammed head-first into the net post, breaking his neck.

“I don’t think,” Blake said, “that would have happened on another surface.”

As for the proper technique, Blake said: “It’s the sliding and the recovery. It’s one thing to slide into it and execute that shot; it’s getting back for the next ball for me was the most difficult. You watch Rafa and you watch Novak, and even Roger, and they do it so gracefully and so easily.”

One issue for Puig when she moved to clay courts: the wrong shoes.

Those for clay use a full herringbone pattern on the sole to stop the dirt from piling up, allowing for more traction — described by former top-10 member Roberto Bautista Agut as “a little more stick” — and smoother sliding.

Hard-court shoes usually have only partial herringbone treads and more cushioning, while grass-court shoes are entirely different, with cleat-like pimples on the bottom.

Today’s pros use all three types of footwear.

The days of the surface specialists are over.

“Twenty, 30 years ago, the players played just on one surface. The Spanish guys never played on grass,” said Pablo Carreño Busta, a former top-10 player from Barcelona who has reached the U.S. Open semifinals and the French Open quarterfinals.

“Maybe one or two players hate to play on these courts,” he said in Paris last year, “but I think everybody knows how to do it. ... If you don’t know how to do it, of course, it’s worse.”