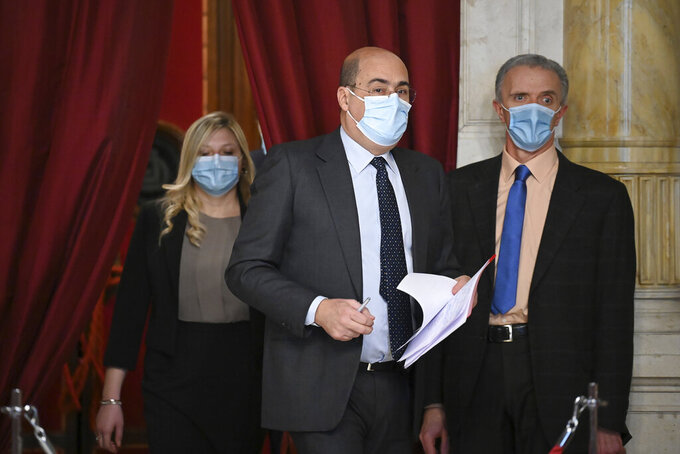 Leader of the Democratic party, Nicola Zingaretti arrives to speak to the media after meeting Mario Draghi, at the Chamber of Deputies in Rome, Tuesday, Feb.9, 2021. Former European Central Bank chief Draghi is consulting Italy's fractious parties after being tapped by President Sergio Mattarella to try to pull together a government to guide the debt-riddled country through the health and economic crises it is confronting. (Alessandro Di Meo/Pool via AP)

ROME (AP) — Former European Central Bank chief Mario Draghi secured pledges of backing from nearly every party represented in the Italian Parliament as he wrapped up political consultations Tuesday that are aimed at giving the pandemic-ravaged nation a new government, likely later this week.

Italy's last government, headed by Giuseppe Conte, imploded last month with a coalition partner's defection. When days of political wrangling failed to revive it, Italian President Sergio Mattarella asked the internationally respected Draghi to use his clout to try to form a government not beholden to any one political group to shepherd Italy through the health, economic and social crises fueled by the coronavirus pandemic.

Draghi could report back to Mattarella as soon as Wednesday afternoon, after meeting earlier in the day with union and business leaders to hear their priorities, that he had succeeded in putting together a viable government.

Among the opposition leaders pledging to back Draghi — at least for now — was former Premier Silvio Berlusconi, who heads the center-right Forza Italia party.

Italy's next parliamentary election is not due until the spring of 2023. After the last election, held in 2018, Conte, a political novice, led back-to-back coalition governments - one center-right and one center-left - composed of squabbling partner parties.

Berlusconi, in remarks to reporters after his talks with Draghi, appeared to link his party's backing to the duration of the pandemic.

A Draghi government would be one "founded on the unity of the country and of the political forces without any preclusion,'' said Berlusconi, a media mogul who served as Italy's premier three times.

He described the odd assemblage of rivals from opposing ends of the political spectrum that were offering Draghi support as "the response to a grave emergency, and it will last for the time necessary to overcome this dramatic health, social and economic crisis.''

How many of the positions in the Cabinet Draghi is assembling will be filled by technocrats and how many by politicians remains to be seen. Whatever its makeup, the next government faces obligatory votes of confidence in both chambers of Parliament.

Eager to have influence when the European Union is expected to start dispensing more than 200 billion euros ($240 billion) in pandemic recovery funds to Italy, right-wing League leader Matteo Salvini rebranded his long-held euroskeptic stance as practical concern for the nation's future.

Salvini said the League insisted with Draghi that the next government's policies ”carry out Italy's interests in a European perspective." The League, he said, would gladly be part of a government capable of getting the country working again and creating new employment opportunities, including 1 million construction jobs, thanks in good part to the EU assistance.

The largest party in the Italian Parliament is the populist 5-Star Movement, which was in both of Conte's governments. With anti-establishment positions among its founding principles, the 5-Stars risk turning bickering factions into outright schisms when its leaders call for support for Draghi in Parliament.

The Movement, which bills itself as an online, grassroots democracy, planned to let its registered members vote online Wednesday and Thursday on whether Draghi deserved 5-Star support.

The prospect of a Draghi government is also testing the center-right political alliance headed by Salvini. Giorgia Meloni, who leads the far-right Brothers of Italy party, said Draghi would not get the confidence votes of the party's lawmakers.

But if legislators vote in line with their leaders' stated pledges, Draghi could expect to win the needed support by handy margins.