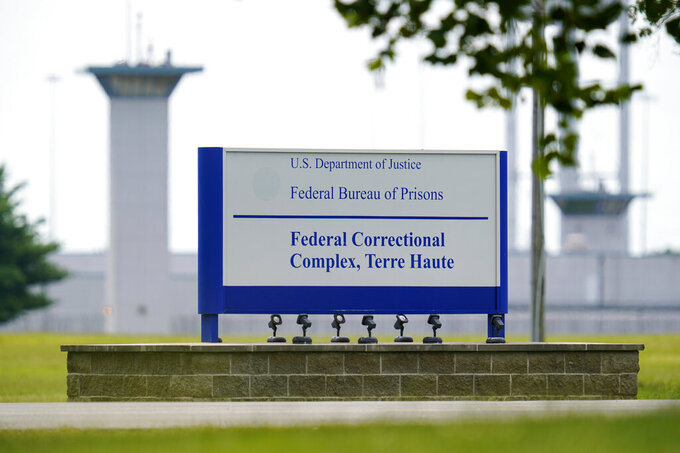 FILE - This Aug. 28, 2020, file photo shows the federal prison complex in Terre Haute, Ind. Corey Johnson, A federal inmate scheduled to be executed less than a week before President Donald Trump leaves office was a gang member who was sentenced to death for killing seven people in Richmond, Virginia in 1992. Johnson is scheduled to be executed Thursday, Jan. 14, 2021, at the federal prison in Terre Haute. (AP Photo/Michael Conroy, File)

RICHMOND, Va. (AP) — It was one of the worst bursts of gang violence Richmond had ever seen. At least 11 people were killed in a 45-day period in 1992, all at the hands of gang members who eliminated anyone they thought would get in the way of their growing crack cocaine business.

Corey Johnson, who was sentenced to death in connection with seven of the slayings, was right in the thick of it as one of the leaders of the Newtowne gang. He and two other members were sentenced to death under a federal law that targets large-scale drug traffickers.

Johnson, now 52, was scheduled to die Thursday at the federal prison in Terre Haute, Indiana, although a federal judge in Washington, D.C., halted that execution and Friday's scheduled execution of Dustin Higgs because both men tested positive last month for COVID-19. Government lawyers have been successful in getting a green light from the U.S. Supreme Court to proceed even after lower courts put federal executions on hold, so there’s a real chance both could still go forward.

If the executions are delayed past this week they might not happen at all because President-elect Joe Biden, who takes office next Wednesday, opposes the federal death penalty and has said he'll work to end its use.

Lawyers for both inmates argue that lung damage from the coronavirus makes it more likely they'll suffer excruciating pain from a lethal injection of pentobarbital. Johnson's lawyers also argue he is intellectually disabled and therefore ineligible to be put to death, under both federal law and a U.S. Supreme Court ruling.

In their clemency petition, Johnson's lawyers asked Trump to commute his death sentence to life in prison. They described a traumatic childhood when he was physically abused by his drug-addicted mother and her boyfriends, abandoned at age 13, then shuffled between residential and institutional facilities until he aged out of the foster care system. They cite numerous childhood IQ tests discovered after he was sentenced that place him in the mentally disabled category and say testing during his time in prison shows he can read and write at only an elementary school level.

“Allowing Corey to be executed would be a grave miscarriage of justice,” said Don Salzman, one of Johnson's attorneys.

Government filings have spelled Johnson's name ‘Cory,' but his lawyers say he spells it ‘Corey.'

Richard Benedict, who was Johnson's special education teacher at a New York school for emotionally troubled kids, said Johnson was hyperactive, anxious and reading and writing at a second- or third-grade level when he was 16 and 17.

“I had to have someone walk him to the bathroom because he just couldn't get back to the classroom," Benedict said.

Prosecutors, however, say Johnson has not shown that he is mentally disabled.

“While rejecting that he has intellectual disabilities that preclude his death sentences, courts have repeatedly and correctly concluded that Johnson’s seven murders were planned to advance his drug trafficking and were not impulsive acts by someone incapable of capable making calculated judgments, and are therefore eligible for the death penalty," prosecutors argue in court documents.

A defense psychologist testified during the trial that Johnson’s IQ was measured at 77, above the threshold score of 75 then needed to label someone as intellectually disabled. Johnson's appellate lawyers say that psychologist was not an expert in intellectual disability and relied on standards that are now outdated.

C.T. Woody Jr., the lead homicide detective on the case, said that during his interrogations of Johnson, he denied any involvement in the killings and said police were trying to frame him because of lies people were telling about him.

“It did not seem to me that he had any kind of mental problems at all except his viciousness and no respect for human life —- none whatsoever,” Woody said.

Former Assistant U.S. Attorney Howard Vick Jr., one of the prosecutors in the case, said the violence committed by Johnson and his fellow gang members was unmatched at the time. One of the gang's victims was stabbed 85 times and another was shot 16 times. Johnson was convicted of being the shooter in a triple slaying, and participating in four other capital murders, including shooting a rival drug dealer 15 times.

In his clemency petition, Johnson's lawyers said he has repeatedly expressed “sincere remorse” for his crimes.

“I’m sorry for the great number of people who are dead, you know, and there is a lot on us, and I feel we are no angels,” he said during his sentencing hearing. He also spoke to a group of students present in the courtroom that day and urged them not to commit crimes or make the mistakes he had made in his life.