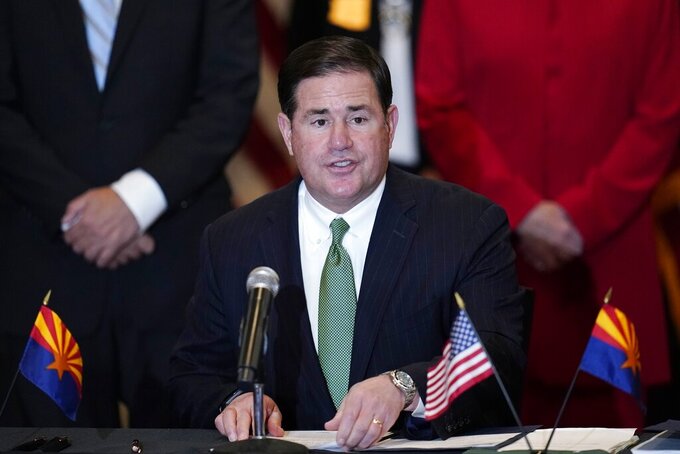 FILE - In this Thursday, April 15, 2021, file photo, Arizona Republican Gov. Doug Ducey speaks during a bill signing in Phoenix. Come fall, Arizona residents who want to have their favorite restaurant deliver a meal to their home may also be able to get a cocktail delivered. Credit the coronavirus pandemic, which prompted Republican Gov. Doug Ducey to issue an executive order last May allowing the practice. (AP Photo/Ross D. Franklin, File)

PHOENIX (AP) — Come fall, Arizona residents who want to have their favorite restaurant deliver a meal to their home may also be able to get a cocktail delivered.

Credit the coronavirus pandemic, which prompted Republican Gov. Doug Ducey to issue an executive order last May allowing the practice. That led to a protracted legal battle with bars who pay much more for their liquor licenses and objected to restaurants getting the chance to poach some of their business.

The bars won a court order in November saying Ducey had overstepped his bounds, and the practice ended. But cocktails to go had traction, and the Legislature worked for months to come up with a new law that satisfied both sides and allows mixed drink delivery to become a permanent part of the Arizona dining scene.

It also allows bars and liquor stores to do the same under complex legislation that was the result of months of negotiations involving restaurants, bars and grocery and convenience stories that currently have licenses to sell liquor, beer and wine, either for on-premises consumption or to take home.

Under the deal, about 3,000 restaurants will be able to get permits to sell cocktails to go, Weninger said. They will be charged an administrative fee by state liquor regulators and for five years have to pay another fee that will go into a fund to compensate bar and grocery store owners.

Not all of those outlets will get the money. It will be dispersed through a lottery system.

Restaurants will also be able to lease a license allowing them to deliver beer and wine.

But the bottom line is that consumers will be able to have a martini delivered with their steak or a margarita with their enchilada dinner.

“This is one of the things that I've heard over and over from constituents that they thought was pretty cool,” Weninger said in an interview. “Secondly, my other constituents, which are bars and restaurants, want to do it and believe that they can derive revenue from it.”

And, he added, the state gets some revenue too.

The deal shows that there are some good things, like the move to telemedicine, that have come from the pandemic, Weninger said.

“You see that it's not the boogieman that people have made it out to be, and you put forward a reasonable policy and allow people a little more freedom,” he said.

Ducey said in a statement business owners showed during the pandemic that “offering to-go beverages can be done responsibly and safely.”

The Arizona Restaurant Association praised the new law, which will go into effect late this summer.

“Restaurants, bars and liquor stores throughout the state will have the opportunity to drastically expand their operations thanks to the signing of House Bill 2773,” Steve Chucri, the group's president and CEO, said in a statement.