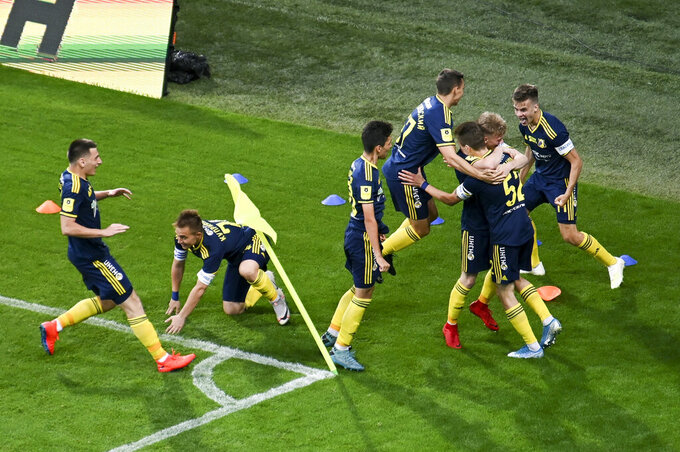 FILE- In this Friday, June 19, 2020 file photo, Rostov's players celebrate after scoring their side's goal during a Russia Soccer Premier League soccer match against FC Sochi as the league was resumed after a three-month hiatus because of the coronavirus pandemic in Sochi, Russia . On Friday, June 19, 2020, Sochi beat FC Rostov 10-1 after Rostov was forced to field youth players, some as young as 16. Rostov's entire first team is in isolation because of a suspected virus outbreak in the squad and Sochi refused to postpone the game. (AP Photo, File)

MOSCOW (AP) — Dynamo Moscow said Sunday that three of its players had tested positive for the coronavirus as its game on the Russian soccer league's restart weekend was postponed.

Sunday’s game was the second to be disrupted by the coronavirus since the Russian league restarted Friday after a three-month pause. League and federation officials said this development did not justify stopping the season.

Dynamo said the team and staff were confined to its training base after the positive tests for forward Clinton N’Jie and midfielders Charles Kaboré and Sebastian Szymanski. All other players tested negative in samples taken Saturday, the club added.

Dynamo was due to play at third-place FC Krasnodar on Sunday but Krasnodar agreed to a postponement.

On Friday, Sochi beat FC Rostov 10-1 after Rostov was forced to field youth players, some as young as 16. Rostov’s entire first team is in isolation because of a suspected virus outbreak in the squad and Sochi refused to postpone the game.

“There is no talk of stopping the season,” the Russian soccer federation and the league said in a joint statement. “Strictly adhering to our requirements and recommendations will make it possible to reduce the risks and to play the championship to its end.”

The Russian Football Union set July 19 as the new date for the Krasnodar-Dynamo game. It also outlined a contingency plan, saying the Russian Cup semifinals and final could be delayed to clear space in the calendar if a team involved in the cup semifinals has a league game rescheduled.

The different approaches of Sochi and Krasnodar to coronavirus cases in their opponents' squads mean that the virus has already affected the fight for Russia's three Champions League places. Fourth-place Rostov is immediately below Krasnodar in the table.

The title race looks effectively over. Zenit St. Petersburg won 4-0 over CSKA Moscow on Saturday and, with seven games remaining, leads by nine points from Lokomotiv Moscow, which beat Orenburg 1-0 on Sunday.

Dynamo already reported coronavirus cases last month. The club said then that one player and one coach had been diagnosed with the virus, that two people had “borderline” results and two more people had antibodies indicating they previously had the virus.