Eager to act, Biden and Democrats leave Republicans behind 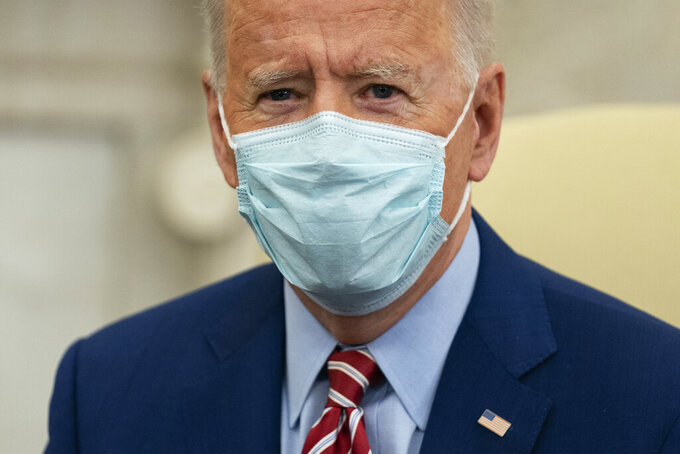 FILE - In this Feb. 11, 2021, file photo President Joe Biden speaks during a meeting with lawmakers on investments in infrastructure, in the Oval Office of the White House in Washington. Biden and Democrats in Congress are jamming their agenda forward with a sense of urgency. They're taking an unapologetically partisan approach to advance the $1.9 trillion COVID-19 rescue, voting rights and other priorities. Their calculation is that it's better to try to push ahead than risk wasting time courting Republican support that may never come. (AP Photo/Evan Vucci, File)

WASHINGTON (AP) — President Joe Biden and Democrats in Congress are jamming their agenda forward with a sense of urgency, an unapologetically partisan approach based on the calculation that it’s better to advance the giant COVID-19 rescue package and other priorities than waste time courting Republicans who may never compromise.

The pandemic is driving the crush of legislative action, but so are the still-raw emotions from the U.S. Capitol siege as well as the hard lessons of the last time Democrats had the sweep of party control of Washington. Republicans are mounting blockades of Biden’s agenda just as they did during the devastating 2009 financial crisis with Barack Obama.

Democrats, in turn, are showing little patience for the GOP objections and entertaining few overtures toward compromise, claiming the majority of the country supports their agenda. With fragile majorities in the House and Senate, and a liberal base of voters demanding action, Democrats are operating as if they are on borrowed time.

For many lawmakers, it's personal.

Rep. Karen Bass, D-Calif., led the George Floyd Justice in Policing Act to House passage Wednesday on the 30th anniversary of the Rodney King beating by police in Los Angeles that she thought at the time would spur policing reforms. Instead, more Black Americans and others have died in police violence, even after Floyd's death at the hands of law enforcement last summer.

“It’s examples like that that lead to the urgency,” Bass said Wednesday.

The start of the first congressional session of the Biden administration was supposed to be a new era of bipartisan deal-making. The Senate evenly split, 50-50, and the House resting on a slim majority for Democrats set prime conditions for Biden to swoop in and forge across-the-aisle compromises.

But the rush through Biden's first 100 days is shaping up as an urgent era of hardball politics, with Democrats prepared to go it alone, even if that means that changes to the Senate filibuster rules are needed to work around Republican roadblocks to legislation that many Americans support.

“We said we’re going to do X, Y and Z, but we didn’t say we were going to be magicians,” said House Majority Leader Steny Hoyer, D-Md. “We can’t magically make the Republicans be for what the people are for.”

Days before Biden entered office, White House chief of staff Ron Klain highlighted the urgency with which the incoming administration would seek to act. “We face four overlapping and compounding crises: the COVID-19 crisis, the resulting economic crisis, the climate crisis, and a racial equity crisis,” he wrote in a memo. “All of these crises demand urgent action.”

From his first hours in office, Biden sought to take deliberate steps to deliver relief, but also to raise awareness about those and other priorities on the theory that moving urgently would increase public support and raise pressure on Republican lawmakers who might stand in the way.

And within the White House there's another kind of urgency: Biden has staffed his administration with veterans of government service who are not looking to stick around that long. Some aides are open about their commitments to help Biden for just a year before returning to private-sector jobs.

Biden’s $1.9 trillion American Rescue Plan is coursing ahead on party-line votes under budget rules that will allow Senate passage by a simple 51-vote threshold, denying Republicans the ability to block the bill with a filibuster that would take 60 votes to overcome.

House leaders have reworked this month’s schedule for legislation to include voting rights, gun background checks and immigration in the queue — many of them do-overs of bills blocked last session by President Donald Trump and Senate Republicans. They still face a long haul to becoming law without GOP support in the Senate.

House Speaker Nancy Pelosi and Senate Majority Leader Chuck Schumer often hark back to the lessons of 2009, when Obama took office during the financial crisis and Democrats cut back the recovery package to win a few Republican votes only to face an onslaught of attacks against the bill.

Many of the same Democrats in leadership today are unwilling to risk a repeat, especially as Treasury Secretary Janet Yellen and other economists now say that paring back the 2009 rescue package stunted the recovery.

“One of the biggest lessons that Republicans learned in the '09 and '10 era is they could basically obstruct everything and not suffer at the ballot box,” said Tre Easton, a senior adviser at the liberal Battle Born Collective.

“We’ll be fighting this in every way that we can,” Senate Republican leader Mitch McConnell said about the COVID-19 package.

McConnell wants Senate Republicans to vote in lockstep against the virus aid, calling it a bloated liberal wish list, following the lead of House Republicans who gave it zero support.

That leaves Democrats negotiating with themselves on the COVID-19 package, with Biden warning they won’t like every aspect as he courts centrists. Progressives are being forced to abandon, for now, a provision to lift the federal minimum wage to $15 an hour. On Wednesday, Democrats decided to more narrowly target $1,400 direct payments to households.

Yet Democrats are holding together, so far, because there’s also the urgency that was not readily apparent until Biden was sworn into office.

Perhaps nothing has stiffened the Democratic resolve like the deadly Jan. 6 siege of the Capitol, which carved new fault lines between those who confirmed the presidential election results and those willing to side with the mob seeking to overturn Trump’s defeat to Biden.

Democratic lawmakers who arrive at the fenced-in Capitol under the watchful protection of armed National Guard troops appear to have “zero” patience, as one aide put it, for engaging with Republicans — some of whom still question the election results. A new threat of violence sent lawmakers to wrap up work for the week late Wednesday.

Republicans are protesting the partisan start, even though they relied on a similar budget mechanism to try to pass Trump-era priorities. They set out to repeal “Obamacare,” an effort that shockingly failed when Sen. John McCain gave it a thumbs-down vote. Later they passed $2 trillion in tax cuts on a party-line vote.

The third-ranking Republican, Sen. John Barrasso of Wyoming, said Biden should go back to his campaign and inauguration themes of bipartisanship “and try to live up to it.”

But a generation of House leaders who have served decades with Biden and are nearing retirement are increasingly pushing for Senate filibuster rules changes to counter Republican opposition.