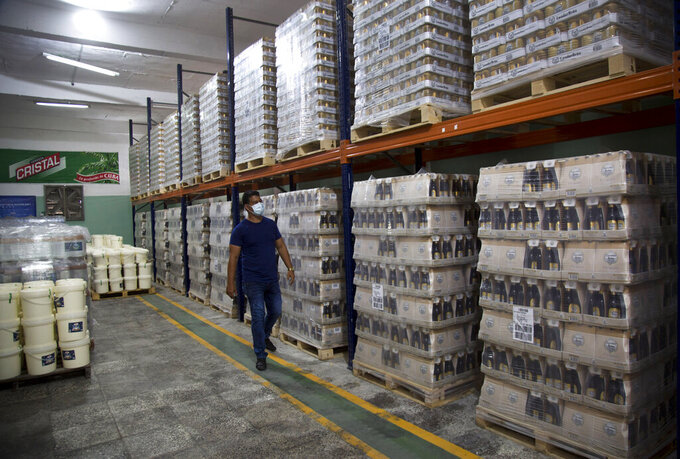 HAVANA (AP) — With its airports closed to commercial flights and its economy tanking, Cuba has launched the first in a series of long-promised reforms meant to bolster the country's struggling private sector.

The island's thousands of restaurants, bed-and-breakfasts, auto mechanics and dozens of other types of private businesses have operated for years without the ability to import, export or buy supplies in wholesale markets. While the communist government began allowing widespread private enterprise a decade ago, it maintained a state monopoly on imports, exports and wholesale transactions.

As a result, the country's roughly 613,000 private business owners have been forced to compete for scarce goods in Cuba's understocked retail outlets or buy on the black market. That has limited the private sector's growth and made entrepreneurs a constant target of criminal investigation.

With the essential tourism business cut off by the novel coronavirus and the government running desperately low on hard currency, the government last month announced that it would allow private restaurants to buy wholesale for the first time. Ministers also announced that private business people could sign contracts to import and export goods through dozens of state-run companies with import/export licenses.

Within four days of its opening to private business, 213 restaurant owners signed up to buy beer, flour, yeast, shrimp, sugar, rum and cooking oil at a 20 percent discount off retail at the Mercabal wholesale market in Havana, state media reported. A similar market has been opened to entrepreneurs in the eastern city of Holguin, according to state media.

Government officials have not said how many import/export contracts have been signed.

Private business owners said they welcomed their new wholesale access, although some said they were skeptical given Cuba's long history of failing to follow through on economic reforms, or of periodically launching crackdowns on what it considers illicit or excessive private sector wealth.

“It's a really good initiative,'' said Tony Baró, the 51-year-old owner of a restaurant in Havana's Vedado neighborhood who was signing up to purchase in the market last week. "It's not meeting all the expectations yet, but we hope that it will in the future.''

Along with limited wholesale, importing and exporting, the government has promised to allow the formation of small and mid-sized private business. Until now, the only legal category of private work has been a license for self-employed people, even though in many cases the self-employed are in fact owners of flourishing businesses with numerous employees.

The government also said it would allow extensive business between private and state-run enterprises, allowing private business to buy and sell from state companies.

On Thursday night, Labor Minister Marta Elena Feitó announced that the authorities are also studying the elimination of some restrictions on the types of businesses allowed to be private so as to encourage entrepreneurial creativity. She offered no details.

Many such measures have been discussed or approved for years, without government action, or withered over time.

“With these measures endure? Is it a temporary patch that they'll undo later, as they've done before?" said Camilo Condis, a 34-year-old self-employed businessman.

The Cuban government has been the target of years of increased sanctions by the Trump administration, although the shutdown of commercial flights under coronavirus has had a far more dramatic effect in less than five months. The government has managed to maintain a low rate of infection but the economy is estimated to drop 8% this year after years of near-zero growth.

‘’This is positive,'' 59-year-old cafeteria owner Elba Zaldívar said outside the Havana wholesale market. ''I think there are will be more products in the future. ... In the end, it's the Cuban people who win."