Ecuador VP resigns, setting off talk of a presidential bid 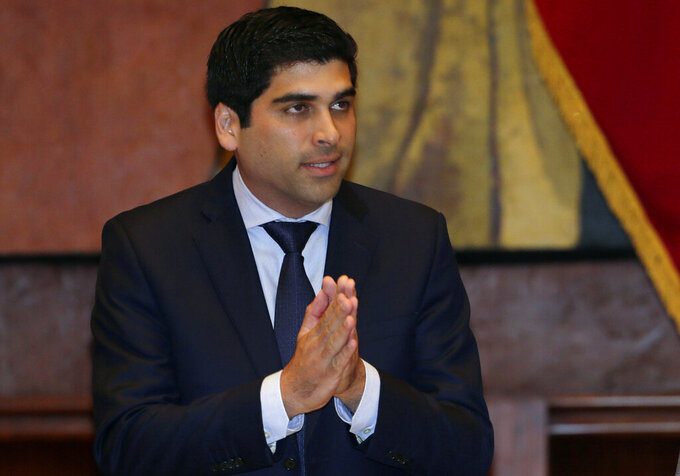 QUITO, Ecuador (AP) — Ecuadorean vice president Otto Sonnenholzner resigned Tuesday, setting off speculation that he could be preparing a presidential bid for the South American nation's elections in February.

Sonnenholzner has become one of Ecuador's most visible politicians since leading a task force that helped control a severe outbreak of the new coronavirus in Guayaquil, the nation’s second largest city and its main port.

Sonnenholzner said in a speech that he decided to leave the vice presidency because the job no longer allows him to help the country solve its “most urgent” needs.

“Next year, Ecuador will face one of its most crucial elections” he said. “And the best I can do for the country is to help construct a path that leads us away from inequality, hunger, unemployment and corruption.”

Sonnenholzner did not announce a presidential campaign. But some analysts think the 37-year-old economist and radio station owner could make a formidable candidate, even if he has never competed in a national election. He was appointed to office 18 months ago by President Lenin Moreno after the previous vice president had to resign amid corruption allegations.

“He is a young man who will be coveted by many parties, because he is not a traditional politician, and has positioned himself well during the pandemic,” said Santiago Nieto, a political consultant in Quito, the capital.

Sonnenholzner has been a fierce critic of former President Rafael Correa, who oversaw a new constitution, shut down a U.S. military base in Ecuador and increased state spending in infrastructure and health, but also ran up the country’s debts.

The outgoing vice president has shown more affinity with the conservative policies of Moreno, who succeeded Correa.

In his resignation speech, Sonnenholzner made several allusions to Correa and his political party, warning voters not to put their trust in those who are “obsesesed with power” and “want to come back at all costs.”

He called Moreno a “good man,” saying the president has begun to put Ecuador on the right track.

Sonnenholzner’s resignation comes as the government is starting to implement an austerity plan that includes widespread reductions of state workers’ pay and the sale of a state-run airline. The program has triggered protests around the country, but Moreno's administration said in May that it expects government revenues to fall by $8 billion this year and that it needs to save money to fight the pandemic.