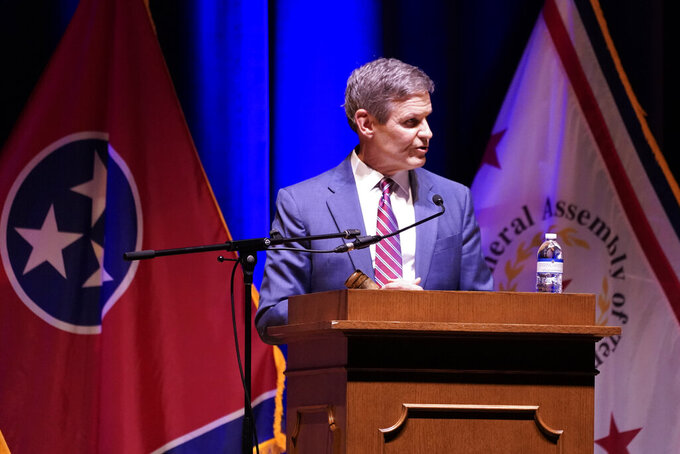 Tennessee Gov. Bill Lee speaks to a joint session of the legislature at the start of a special session on education, Tuesday, Jan. 19, 2021, in Nashville, Tenn. (AP Photo/Mark Humphrey)

But the Republican governor also had harsh remarks for schools that had rebuffed his push for in-person learning, declaring that those districts were not using science to make such decisions — a criticism that has sparked objections from Democratic lawmakers and education advocates.

Lee’s remarks to the Republican supermajority Legislature kicked off a special session he called to focus on educational issues posed by the coronavirus. The state's top education officials have warned that students have experienced serious adverse learning effects that could plague them for years.

Yet conflicts are expected to flare up over the next few days inside the General Assembly on the best approach. Other proposals Lee has put on the table focus on after-school and summer programs, tutoring, and temporarily holding teachers harmless from student standardized testing.

Lee’s administration is backing a proposal that would prohibit third grade students from being promoted to the next grade unless they scored high enough on the state’s comprehensive assessment test. The legislation proposes some exceptions, including allowing English language learner students to continue onto the next grade or if the student attended learning camps that the state’s education department would create.

Lee's administration has pointed to students not being in the classroom as the key reason for the learning loss. Others counter that the state has not provided an avenue to safely providing in-person instruction, particularly in areas where virus numbers are the highest in the state.

Further adding to the political struggle is that the state's largest Democratic strongholds — Nashville and Memphis schools — have largely held off on offering in-person schooling due to high COVID-19 case numbers.

“Months ago, when critics were loud and the scare tactics were louder with all the reasons why we couldn’t safely return students and teachers to the classroom, we traded that speculation for science,” Lee said, commending schools that continued in-person learning for not choosing “the path of least resistance."

Democratic lawmakers were quick to point that while Lee stressed the importance of following science for opening schools, the governor also has long refused to implement a statewide mask mandate despite the policy being backed by multiple health experts.

“I think we all want our kids to get back to in-person learning, but how are we going to do that safely?” Dixie added.

Meanwhile, teacher advocates have questioned the pay raise amount, which includes $43 million through a special session bill and, according to Lee, more money later in the state budget. Lee said it would equate to a 4% increase in the salary component of the education funding formula, though that doesn't necessarily equate to 4% raises.

According to the Tennessee Education Association, the average teacher worked more than 13 extra hours a week in the fall, whether classes were in-person, virtual or a combination, with a large amount of them working at least 20 additional hours. The association expressed “significant questions and concerns” about the other proposals.

“Missing from (Lee's) speech was an acknowledgment that the state has the capacity to do more than his proposed 4% raise to compensate educators for their commitment to Tennessee students,” TEA President Beth Brown said in a statement Tuesday.

Last year, Lee had originally proposed funneling an additional $117 million to K-12 teacher salaries before the outbreak hit. If approved, the starting minimum annual salary for teachers would have increased from $36,000 to $40,000 over two years.

Lee and lawmakers nixed the raises and other spending items at the outset of the pandemic last year, bracing for what they thought could be a huge budget hole due to the virus and its impact on the economy. Instead, the state has seen its coffers grow — fiscal-year-to-date revenues over five months have been $732.8 million more than what the state estimated, with a revenue growth rate for those five months of 3.38%.

The state last registered a decline in revenues for June, with each month since showing growth year-over-year and compared to the budget estimate.