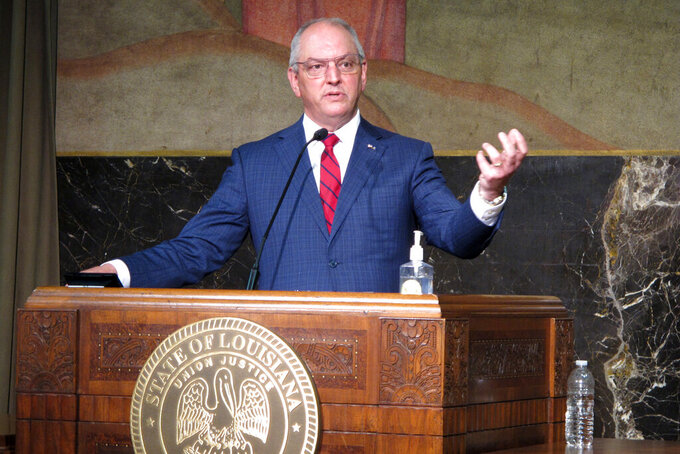 The Democratic governor said he doesn't intend to immediately end the weekly federal aid, but he left open the possibility of doing so later.

“We believe this additional benefit was an important short-term solution to help individuals who were adversely impacted at the start of the pandemic," the groups wrote. “However, 13 months later, many employers are finding it near impossible to fully staff their business, which impacts the supply chain and timely delivery of goods and services.”

For now, Edwards intends to keep the federal aid flowing even as many of Louisiana's neighboring states have opted out of the benefit. But he said on his monthly radio show Wednesday that he will study the issue, and he reenacted requirements in August that people receiving jobless aid prove they are looking for work.

“What I want to do is make sure that it would be right for Louisiana, and I don’t want to rush into this,” Edwards said of scrapping the federal jobless aid.

The governor noted that Louisiana is heavily dependent on tourism, which hasn't recovered from the pandemic, and he said that sets the state apart from many of its neighbors.

“It appears to me the case may be different (for Louisiana), and we want to have economists take a look at this," he said.

The extra $300 per week in federal assistance, available until September, comes on top of state unemployment benefits that max out at $247 a week in Louisiana.

While the business groups believe the extra federal jobless benefit is discouraging some people from taking jobs, government surveys also show people are reluctant to look for work because they fear contracting COVID-19. In addition, other groups say many women have dropped out of the workforce to care for children and some people are searching for higher paying jobs with benefits.

The left-leaning Economic Policy Institute argued in a recent commentary that policymakers shouldn't rein in the unemployment benefits.

“Cutting pandemic (unemployment) benefits now, as some states have done or are considering, will not just hurt workers who are depending on federal benefits while they cannot find work or are unable to work, it will also drag on the economy, as those benefits are supporting spending,” the organization said in the post.

The business groups that wrote to Edwards — which include the powerful Louisiana Association of Business and Industry and the National Federation of Independent Business — point to 17 other states they said have rejected the extra federal unemployment aid. They include many Southern states, such as Texas, Arkansas, Mississippi, Alabama, Georgia, Tennessee and South Carolina, the organizations wrote.

“Only a few months ago, businesses were scaling back, reducing hours and limiting services because of the COVID-19 restrictions,” Dawn Starns McVea, Louisiana director of NFIB, said in a statement. “Now, they’re doing it because they can’t find enough people to work.”

Republican lawmakers have proposed giving Louisiana residents receiving unemployment a lump sum payment of $500 or $1,000 to go back to work, but only if they give up their right to claim jobless benefits for six months. That proposal, which has drawn opposition from Democrats, awaits debate on the House floor.