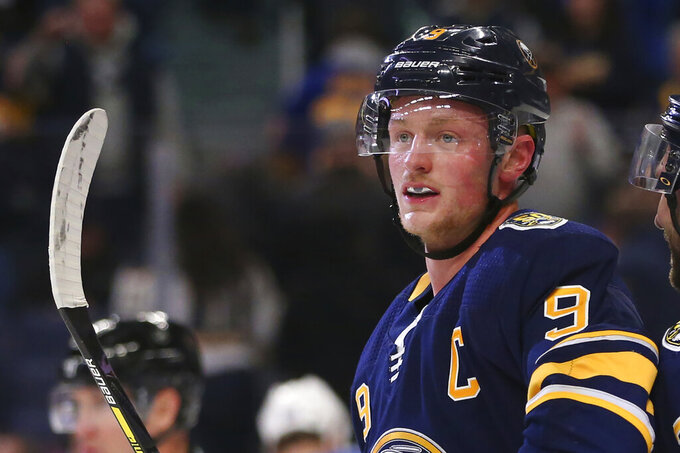 FILE - In this Dec. 10, 2019, file photo, Buffalo Sabres captain Jack Eichel (9) looks on during the third period of an NHL hockey game against the St. Louis Blues, in Buffalo, N.Y. Eichel kept his frustrations in check for the first 14 minutes of an end-of-season interview with Buffalo-area reporters on Thursday, May 28, 2020. It wasn’t until he was asked to assess the future of a team that’s not made the playoffs during his five year tenure, when Eichel finally let loose by saying: "I'm fed up with losing." (AP Photo/Jeffrey T. Barnes, File)

It wasn’t until he was asked to assess the future of a team that’s not made the playoffs during his five-year tenure, when Eichel let loose.

Where they’ve gone is essentially nowhere for the 23-year-old Eichel, who was celebrated as the franchise’s key building block after being selected with the No. 2 pick in the 2015 draft. He is also the franchise's top-paid player in completing the second season of an eight-year, $80 million contract.

Though Eichel made great strides playing to his potential in leading the Sabres both on and off the ice this season, he was let down by a floundering franchise which extended the NHL’s longest active playoff drought to a ninth consecutive year.

Eichel made sure to credit the signs of progress the team showed under first-year coach Ralph Krueger, Buffalo's third in five seasons.

What ate at him was how Buffalo couldn’t even qualify for the NHL’s expanded 24-team playoff format caused by the pandemic, and after vowing in February that the “wheels wouldn't fall off,” as had happened in previous years.

“(Teams) are gaining valuable, valuable experience as a group. And we’re not one of them,” he said. "So, it does add to the frustration.”

It doesn’t help Eichel knowing one more win before the season was paused in March would’ve made the difference. Buffalo finished 13th in Eastern Conference with a .493 points percentage, and was edged out by Montreal (.500) for the final spot.

Frustrations aside, Eichel enjoyed a breakout season that at one point had him in the MVP conversation. He led the team and finished eighth in the NHL with a career-best 36 goals, including nine game-winners, and 78 points in 68 games.

Eichel, who missed just one game, acknowledged playing a portion of the season with an injury, which he declined to disclose. He said there is a lingering issue as a result of the injury, which he intends to take care of soon.

He was praised by teammates for growing into his own as captain by leading by example.

“I couldn’t help but think about Jack and his competitive drive and trying to make his teammates better this year, and how big of the strides we took” McCabe said.

Eichel was humbled by the praise, and credited his development to the bond he established with Krueger, whom he called “one of the greatest natural born leaders I’ve ever been around.”

Though the Sabres endured lapses in consistency, Eichel credited Krueger for keeping the team focused through several rough stretches. Buffalo was in contention for a playoff spot in late February before opening a four-game trip with a 3-2 loss at Colorado. The Sabres went on to lose six straight.

“It’s one thing to be in the tight games. It’s another thing to win them,” Eichel said, noting the Sabres could benefit from additional veteran depth and toughness.“I’m not getting frustrated with where things are going. But yeah, I’m definitely not in the greatest place where the last little bit went. It’s definitely worn on me.”

NOTES: Defensman Rasmus Ristolainen acknowledged he would be open to being traded, while adding he enjoyed playing under Krueger. In completing his seventh season in Buffalo, Ristolainen is the team's longest-serving active player and has yet to make the playoffs. “If changes happen, I know I'm one of the first ones probably who is going to get traded,” he said. “It's part of the business and I'm ready, whatever happens. I have really enjoyed my time in Buffalo.”