El Salvador awaits what president will do with new power 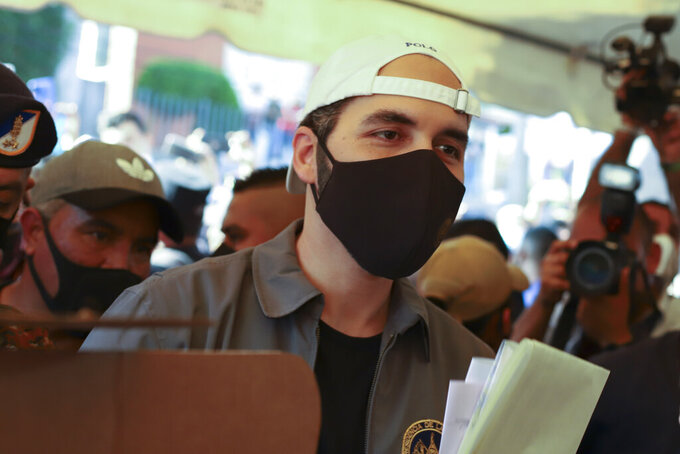 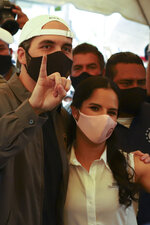 SAN SALVADOR, El Salvador (AP) — El Salvador President Nayib Bukele’s New Ideas party dominated every aspect of this month's national elections and will take control of congress and the majority of the country’s municipalities. What remains unclear is what it will do with that power.

The new legislature won’t be seated until May, but so far the top priority voiced by the party has been Bukele’s refrain, repeated by New Ideas candidates throughout its campaign: Remove the corrupt.

The party’s more specific hints focus on erasing the grip that El Salvador’s traditional parties have held on power for almost three decades.

Bukele has asked Vice President Félix Ulloa to form a commission of lawyers to evaluate proposals for constitutional reforms to be presented to the new legislature.

New Ideas won 56 of 84 seats in the Legislative Assembly, giving Bukele’s party a two-thirds majority. That will let it select the new attorney general, justices for the Supreme Court and human rights prosecutor — essentially all the key domestic critics of Bukele's allegedly authoritarian tendencies.

“I hope that (Bukele) keeps all of his promises, that they strip the deputies of their immunity, that they finish off the shameless,” said María Catalina Espinoza, a 42-year-old homemaker who was grocery shopping in downtown San Salvador this week. “We’re tired of so much corruption.”

Bukele leapt from mayor of El Salvador's capital to the presidency in 2019 by campaigning almost exclusively on rooting out endemic corruption.

His rise was made possible by the repeated scandals of the conservative National Republican Alliance and its leftist counterpart, the Farabundo Martí National Liberation Front, where Bukele got his start. Those parties, which had dominated El Salvador’s politics since the end of the 12-year civil war in 1992, had lost credibility in the eyes of the public.

But that largely two-party system also had maintained some degree of rigor in El Salvador’s democratic institutions. With Bukele’s allies on the verge of controlling all three branches of government, many fear that El Salvador’s system of checks and balances could be in danger.

Michael Shifter, president of the Washington-based Inter-American Dialogue, said that while Bukele is a legitimately elected president with solid support, “his authoritarian tendencies and the weakening of any control on his power are reason for great concern.”

In February last year, Bukele sent armed troops to surround Congress to pressure lawmakers to pass a loan for security funding. In June, the Supreme Court’s Constitutional Chamber ruled that Bukele’s obligatory stay-at-home measure to slow the spread of COVID-19 was unconstitutional. The president lashed out at the justices repeatedly.

“The court has just ordered us to murder dozens of thousands of Salvadorans within five days,” he wrote on Twitter.

Political analyst Dagoberto Gutiérrez, a former guerrilla commander who signed the 1992 peace accords, said El Salvador urgently needs reforms to the educational, health and tax system and to how its democracy function.

He said Bukele must start “where the people suffer most," with issues such as unemployment and poverty.

That raises the question of whether the administration’s attention to the courts, potential constitutional reforms and stripping opponents of power will satisfy a population with more pressing concerns.

The Biden administration already appears to be taking a more wary approach than that of former President Donald Trump, whose focus on slowing migration from Central America led the U.S. to turn a blind eye to issues of corruption and other worrying signs.

When Bukele made a quick trip to Washington after Biden’s inauguration, administration officials declined meetings. Bukele has denied that he sought meetings.

Leonor Arteaga, program director at the Due Process of Law Foundation, a regional rule of law organization based in Washington, spoke of both opportunities and dangers facing Bukele during a panel discussion this week.

“Nayib Bukele has transformed the Salvadoran electoral landscape by challenging El Salvador’s political institutions and norms, and some change is important and it’s healthy,” Arteaga said. But she warned the power could easily be used “for the purpose of installing a new elite in El Salvador that would use the state and state resources for their own purposes.”

She said his broad support will lead to great demands for change, which could be a challenge.

"He has the opportunity to make things different because this popular support will not last forever and he should not waste this opportunity to transform El Salvador.”