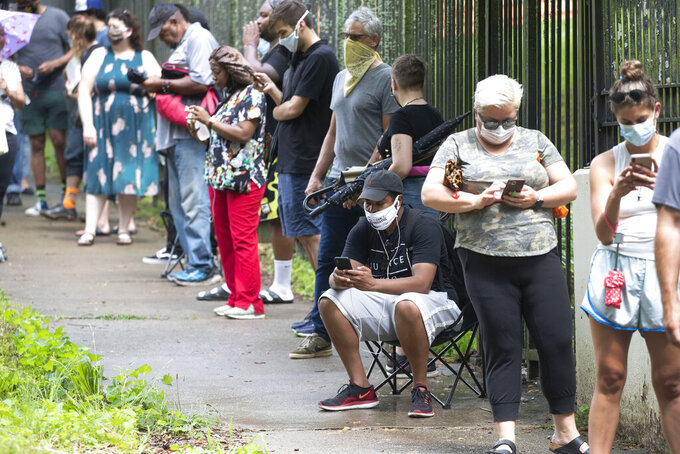 FILE - In this June 9, 2020, file photo, Steven Posey checks his phone as he waits in line to vote at Central Park in Atlanta. Voters reported wait times of three hours. When some Georgia voters endured a pandemic, pouring rain and massive waits earlier this month to cast their ballot, President Donald Trump and other Republicans blamed local Democrats for presiding over chaos. (AP Photo/John Bazemore, File)

ATLANTA (AP) — When some Georgia voters endured a pandemic, pouring rain and massive waits earlier this month to cast their ballot, President Donald Trump and other Republicans blamed local Democrats for presiding over chaos.

“Make no mistake, the reduction in polling places is a result of a concerted effort by Democrats to push vote-by-mail at the expense of in-person voting,” said Justin Clark, the Trump campaign’s senior counsel. “Nothing more and nothing less.”

But the meltdown was also a manifestation of a landmark Supreme Court case that gutted a key provision of the Voting Rights Act. The 2013 decision — Shelby County v. Holder — was heralded by conservatives at the time for invalidating a longstanding “preclearance” process that required certain states and jurisdictions with high minority populations and a history of discrimination to get federal approval for any changes to voting procedures.

Seven years later, the fallout from that decision is colliding with unprecedented changes to the way elections are being conducted. In response to the coronavirus, many states are encouraging mail-in voting. That — combined with a reduction in poll workers — has prompted the consolidation of polling places.

That reduction would have been much harder to pull off in Georgia without the Supreme Court decision. Voting rights advocates are braced for more potential trouble on Tuesday when another round of states hold elections.

In Kentucky, the planned reductions in polling places are even sharper than Georgia, with fewer than 200 across a state that usually has nearly 3,700, prompting worries especially about the state’s most populous cities where Kentucky’s nonwhite population is concentrated.

Meanwhile, Trump has railed against voting by mail, arguing without evidence that it could contribute to fraud. Conservatives are trying to use an Arizona case over absentee voting to further weaken the Voting Rights Act. And concerns are mounting across the ideological spectrum that the changing nature of elections could leave some Americans questioning the result in November.

“Everything is happening at once right now,” said University of Georgia law professor Lori Ringhand, citing the pandemic, states like Georgia moving to new voting machines and years of legal wrangling over racial discrimination and election security. “It’s just a perfect storm happening in a political environment that has politicized the very act of making voting either easier or harder.”

Democrats worry that the GOP goal is to make voting harder. Trump is especially critical of moves that would expand voting by mail and warned without evidence on Monday that foreign countries may try to print ballots.

Georgia Democratic Party Chairwoman Nikema Williams said the anxiety among many in her party is a reminder that a full-strength Voting Rights Act is needed, though she accepts that federal law won’t change before November.

“Your right to vote should not depend on your zip code, what county you live in,” she said.

Joe Biden, the presumptive Democratic presidential nominee, has called for restoring the Voting Rights Act, but he has not released detailed proposals.

A key question is whether to attempt a new version of “preclearance” by updating the formula used to decide what states and local areas must submit to the process, since that formula is what the Supreme Court ruled impermissible. The path more likely to withstand the court’s scrutiny, said Ringhand, is for Congress to set standards that apply nationally.

A White House spokesman declined to comment when asked whether Trump might ever pursue a Voting Rights Act update.

The previous requirements were a key voting rights tool because it turned a usual legal principle on its head. Litigants usually must wait until after some harmful action before asking a court for relief, but “preclearance” put the burden on government officials to prove their proposed election rules would not harm minority voters.

Kentucky, which is among the states holding primaries on Tuesday, had not been affected by that provision.

Voting rights advocates sued there anyway under the remaining law’s general prohibition on discrimination, but a federal District Court ruled the overhauled precinct plan was allowable. That decision shows the difficulty citizens sometimes have in proving voting rights violations, especially when the challenge is theoretical, before an election has even taken place.

The burden could get even heavier if Republicans and conservatives get their way in an Arizona case. That dispute started with a challenge to the state’s ban on “ballot harvesting,” the practice of third parties rounding up absentee ballots.

A federal appeals court ruled against the law, using Section 2 of the Voting Rights Act. Congress spelled out in 1982 that it intended that part of the law to be applied as a “results” test, meaning courts would simply judge whether laws from elections procedures to district boundaries for elected posts had a discriminatory effect on minorities. Some conservatives now want the Supreme Court to rule that anyone challenging a law under Section 2 would have to prove that lawmakers intended to discriminate. That’s a much higher burden of proof required to strike down a law.

In the meantime, Ringhand lamented that voters are displaying diminishing confidence that any of the authorities involved are truly interested in fairness.

“I’m not sure there’s a great deal of trust in any of our decision makers right now, whether that’s legislators or state judges or federal judges or secretaries of state,” she said. “Trust is at an all-time low.”