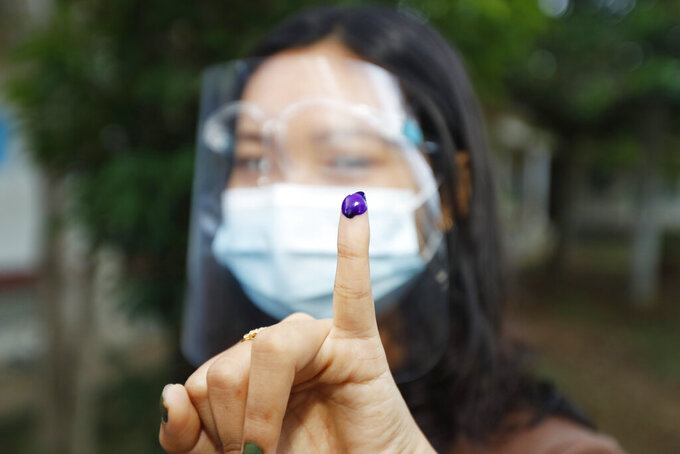 FILE - In this Sunday, Nov. 8, 2020 file photo, a woman displays her finger marked with ink indicating she has voted as she leaves a polling station, in Naypyitaw, Myanmar. A major election monitoring organization says last November’s election results in Myanmar were representative of the will of the people, rejecting the military’s allegations of massive fraud that served as its justification for seizing power. ANFREL, the Asian Network for Free Elections, said in a 171-page report said procedural safeguards helped make the polling process transparent and reliable. (AP Photo/Aung Shine Oo, File)

BANGKOK (AP) — Last November’s election results in Myanmar were “by and large, representative of the will of the people,” an independent election monitoring organization said Monday, rejecting the military’s allegations of massive fraud that served as its reason for seizing power.

While there were flaws in the election process, “there were a number of procedural safeguards implemented throughout the polling process, which ... was found to be transparent and reliable,” the Asian Network for Free Elections said in a report.

It noted, however, that Myanmar’s electoral process is “fundamentally undemocratic” because its 2008 constitution, written during army rule, grants the military an automatic 25% share of all parliamentary seats, enough to block constitutional changes. Large sectors of the population, most notably the Muslim Rohingya minority, are deprived of citizenship rights, including the right to vote.

Aung San Suu Kyi's National League for Democracy party won a landslide victory in the Nov. 8 polls, which should have secured it a second five-year term in office. Its 2015 victory moved Myanmar along a path toward democracy after more than five decades of direct and indirect military rule.

But on Feb. 1, the military arrested Suu Kyi and dozens of other top officials. It prevented elected lawmakers from convening a new session of Parliament, declared a state of emergency and said it would run the country until new elections were held in a year -- a deadline it later indicated could be delayed an additional year.

Security forces have used lethal force in an attempt to suppress huge popular opposition to the military coup. Hundreds of protesters and bystanders have been killed in the crackdown.

The report by ANFREL, a non-partisan international group working for fair elections in Asia, noted that junta leader Senior Gen. Min Aung Hlaing said the military took over because “there was terrible fraud in the voter lists.” The army-backed Union Solidarity and Development Party, which suffered unexpectedly heavy losses in the election, made similar allegations.

Since the coup, the state-controlled media have released data down to the township level purporting to show that voter lists could not be reconciled with the election results.

ANFREL said it “lacked sufficient information to independently verify the allegations of voter list fraud” because the election law did not allow it access to voting lists, but that it had not seen any credible evidence of any massive irregularities.

The report said there was merit to several complaints about the election made not just by the Union Solidarity and Development Party — the main opposition party — but also by independent observers.

The biggest issue was the cancellation of voting for security reasons in several areas where insurgent groups had been active. ANFREL criticized the cancellations by the Union Election Commission for being “conducted in an opaque, arbitrary, and inconsistent manner” and noted that they were seen by critics as aimed at limiting the seats that might be won by ethnic political parties that were rivals of Suu Kyi’s party.

Other areas in which the election fell short included discriminatory citizenship laws that were used to reject some candidates, especially Muslims, and the dissolution of one group, the United Democratic Party, just three weeks ahead of election day. Disqualifying the party, which had fielded the second highest number of candidates, “disenfranchised advance voters who had already cast their ballots” for its candidates, ANFREL said.

“Nevertheless, it is ANFREL’s informed opinion that the results of the 2020 general elections were, by and large, representative of the will of the people of Myanmar. Despite the raging COVID-19 pandemic, 27.5 million people voted thanks to the hard work of polling staff and election or health officials; their voices cannot be silenced,” the report said.