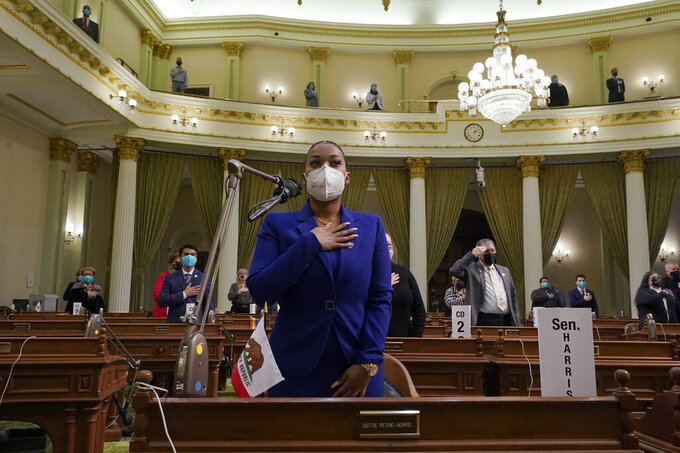 Electoral Tayte William leads members of California's Electoral College in the Pledge of Allegiance at the state Capitol in Sacramento, Calif., Monday, Dec. 14, 2020. Williams was selected by Vice President-elect Sen. Kamala Harris to represent her at the Electoral College. (AP Photo/Rich Pedroncelli, Pool)

Biden and Harris, the home-state senator, carried the heavily Democratic state in a landslide on Election Day, defeating Trump by over 5 million votes. California, the nation’s most populous state with 40 million people, is the largest prize in the presidential election.

The vote Monday was taken in a mostly subdued ceremony in the ornate state Assembly chamber in Sacramento, where electors wore face masks and were socially distanced at separate desks for safety because of the coronavirus pandemic.

When Assemblywoman Shirley Weber, a San Diego Democrat who chaired the proceedings, announced the unanimous votes, electors burst into cheers and stood applauding at their desks. The California tally pushed Biden above the 270 electoral votes he needed to formally claim the win.

During the proceedings, there was no direct criticism of Trump or the unsubstantiated allegations of voter fraud that he has been making since the election.

Weber, however, talked of the enduring strength of democracy, the importance of an orderly transfer of power and persevering through challenging times.

“We've made all of those who stand so firm on this Constitution very proud, because we have ensured the will of the people will be done,” she said.

Small pro-Trump protests have been staged in Sacramento since the election, but the fenced statehouse grounds were quiet Monday. Police vehicles were parked outside several entrances.

The state-by-state tally of electoral votes, typically a little-watched ceremony, took on added importance this year because of Trump’s refusal to concede he lost his bid for a second term.

The results will be sent to Washington and tallied in a Jan. 6 joint session of Congress over which Vice President Mike Pence will preside. When all the votes are in, Biden is expected to have 306 electoral votes to 232 for Trump.

Biden’s victory represents the eighth consecutive presidential election that Democratic candidates have secured in California. The last Republican to carry the state was George H.W. Bush in 1988.

Biden piled up a record 11.1 million votes in the state, with Trump pulling in just over 6 million.