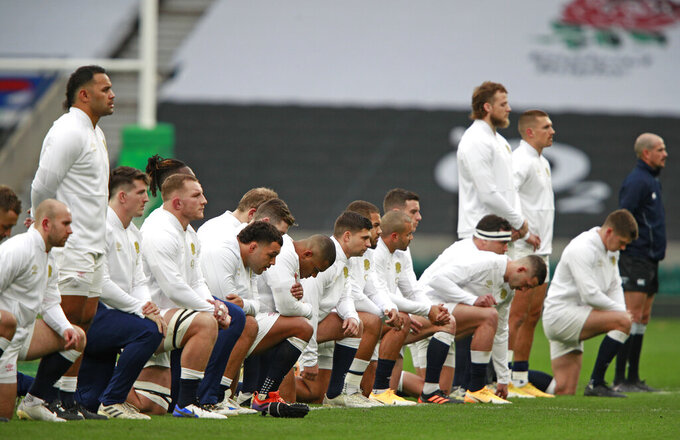 For a team which was competing in the biggest game in rugby barely a year ago, there’s understandable concern that playing in the final of a hastily arranged tournament against an understrength opponent in an almost-empty stadium will not get the juices flowing for England’s players.

“This is a big deal,” the England winger said ahead of his team’s meeting with France in the inaugural Autumn Nations Cup final on Sunday at Twickenham.

OK, it’s not the Rugby World Cup, which England lost to South Africa 32-12 in November last year — a defeat that Watson says he’ll never get over.

It cannot be compared, either, to that final day of the pandemic-delayed Six Nations on Oct. 31 when England became king of Europe once again by beating Italy and seeing Ireland lose to the French a few hours later.

For Watson, though, it’s another piece of international silverware at stake, another match to “measure yourself as a player.” A chance, he said, to avenge England’s only defeat in a strange 2020, albeit against a very different French lineup to that day in February.

“Irrelevant of how it’s portrayed,” Watson said, a nod to the fact the Autumn Nations Cup has hardly grabbed the imagination, “and irrelevant of all the talk about what team France are putting out, it’s a big game.

"There’s loads of stuff that could motivate the lads this week. It’s a final and there’s a trophy to be won at the end of it. In the previous final we played, we didn’t win.”

England starts as the overwhelming favorite given France will be fielding a second-string team due to an agreement among its clubs about player workload.

If that is a disappointment for neutrals, then so has been the fare served up during the competition. There has been disillusionment over the lack of ambition of teams and the fact that defences have been on top.

England, for example, has been workmanlike in successive wins over Georgia, Ireland and Wales but coach Eddie Jones is not concerned it might be a turnoff for casual fans, insisting instead it is just a sign of the times in world rugby.

“Just looking at rugby at the moment, it’s certainly a tough, physical game. A real game for the purists at the moment,” Jones said. “It reminds me of the 2007 World Cup where defenses were pretty dominant and kicking was one of the major ways to get ahead in the game.

“We go through these periods in the game. The next cycle is always an attacking one so let’s enjoy the defensive cycle we have at the moment and look forward to the attacking cycle when it comes.”

The French, seeking to claim their first piece of international silverware since grand-slamming the Six Nations in 2010, don't accept they are going into a Twickenham “slaughterhouse” given their weakened team.

“You shouldn’t look at it this way,” said France fullback Brice Dulin, who stood out in last weekend's win over Italy that sealed a place in the final. “I know what’s going to happen. They (the English) will talk loudly, celebrate each penalty.

"We can’t panic and we’ll have to be strong mentally.”

Even if France falls short, the team looks a different proposition under Fabian Galthie since he took over after the World Cup, with Les Tricolores finishing second in the Six Nations — behind England only on points difference.

Dulin credits that to Galthie creating a totally fair environment.

“Everyone’s on the same level, no one is left out. This closeness makes for a greater sense of sacrifice on the field," Dulin said. "I can understand better why we’re winning, something has been created.”

There will be 2,000 fans inside Twickenham with England having come out of lockdown this week but still limiting the number of people allowed into sports arenas.

None of the flyhalf heirs to Jonathan Sexton have managed to sustain a strong challenge. Joey Carbery and Billy Burns are injured and Jack Carty and Ross Byrne haven't transferred their club form to the test stage.

A good thing for Ireland, then, that the 35-year-old Sexton wants to keep playing for as long as possible.

He returns ahead of schedule from a right hamstring injury to face Scotland on Saturday in the playoff for third-fourth place at Lansdowne Road. He's not in the form he was in 2018 when he was world player of the year but Sexton remains Ireland's best No. 10 and a proud captain, with an eye on the 2023 Rugby World Cup.

"I want to be the best outhalf in Ireland and I still have aspirations for other things as well.”

Sexton said he's inspired by former Leinster teammate Brad Thorn, the New Zealand lock who won the 2011 World Cup at age 36 and the European Cup at 37.

Coach Andy Farrell said even when Sexton isn't playing, he remains influential with advice and encouragement to the team.

"He brings a feeling to the group that makes everyone feel right and ready to go for a big test match at the weekend,” Farrell said.

In contrast, Scotland will debut Jaco van der Walt at flyhalf after the South African qualified for the Scots last month on the three-year residency rule.

He's replaced Duncan Weir, the No. 10 through the group stage in the absence of the injured Finn Russell and Adam Hastings. Captain and fullback Stuart Hogg will cover for Van der Walt.

"This year and last year, he's taken his game to another level (for Edinburgh),” Scotland coach Gregor Townsend said of Van der Walt.

"Defensively, he must be one of the best tackling standoffs in world rugby. His passing and his kicking is at a high level. Just getting used to international rugby will be a great experience for him.”

Wales and Italy are ending the year where it started -- in Wales against each other. Italy was beaten 42-0 in the Six Nations but Wales then lost seven of its next eight tests.

The defeats forced first-year coach Wayne Pivac to look deeper and farther for talent, and he has continued to experiment.

Regular wing George North is at center on Saturday in Llanelli like he was against Italy in February, Kieran Hardy and Callum Sheedy are the starting halves for the second time this autumn, there's another different front row including a first test start for hooker Sam Parry, and encouragement for flanker James Botham and wing Louis Rees-Zammit. The end result has been gradual improvement.

“We wanted this campaign to be about giving players opportunity and we have done that,” Pivac said.

They should have enough skill in this playoff for fifth-sixth place to beat Italy, which has lost eight games in a row, including all seven this year. If Italy lose this one, it will be the first time in the professional era it has failed to win in a calendar year.

Italy's problem has been execution. It has held the ball on average longer than any other team in the tournament.

Coach Franco Smith changed only three after losing to France 36-5, a game which got away from them after a yellow card to Jacopo Trulla, who has been shifted to fullback. Montanna Ioane, nephew of former Wallabies back Digby Ioane, debuts on the right wing.

Stephen Varney, a 19-year-old Wales-born scrumhalf, makes his first test start in harness with flyhalf Paolo Garbisi. They starred in the Italy Under-20s’ win over Wales in January.

Better late than never. Fiji finally join the party for the playoffs weekend after 29 people in its camp were infected by the coronavirus, forcing the cancellation of its group matches against France, Italy and Scotland.

The worry for Fiji at Murrayfield on Saturday is how quick it can get up to speed against the Lelos, who lost their three matches but improved each time. They conceded six tries to England and two each to Wales and Ireland, while their single try is the tournament's best, so far, by center Giorgi Kveseladze in Dublin.

The Georgians have been physical up front and in defense, and appear to have tidied up their weakness in lineout drives.

But in this playoff for seventh-eighth place they are going to miss powerful No. 8 Beka Gorgadze, who injured his knee against Ireland. Gorgadze has made more than twice as many carries as any other teammate.

"Fiji will still be highly competitive because of their natural talent,” Georgia strength and conditioning consultant Calvin Morriss said. “Georgia must use the recent experience of their competitive games to their advantage and play at a pace and tempo that can give them an edge.”

When they last met at the Rugby World Cup in Osaka 14 months ago, a tight first half was followed by Fiji center Semi Radradra scoring two tries and setting up three more in a 45-10 win.

New coach Vern Cotter is concerned Radradra, the new captain, and the likes of wings Josua Tuisova and Nemani Nadolo will be afterthoughts if they don’t receive good ball with some space. They need a platform from the forwards who need to be attentive and work hard, Cotter said.

AP Sports Writer Jerome Pugmire in Paris and Foster Niumata in London contributed to this report.