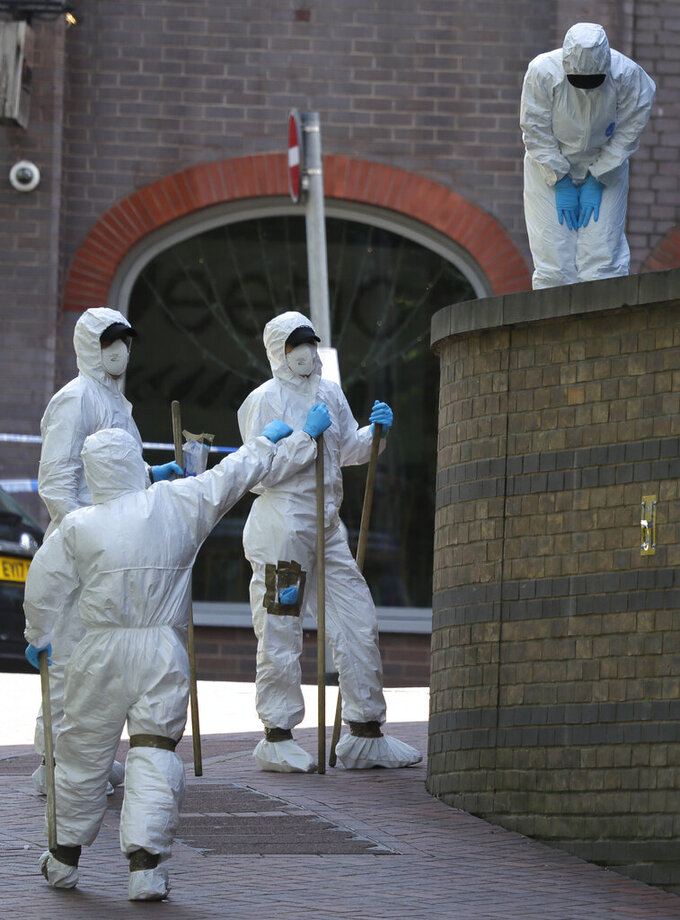 Police forensic officers search near the scene of a fatal multiple stabbing attack in Forbury Gardens, central Reading, England, Monday June 22, 2020. The English town of Reading is mourning for three people stabbed to death on Saturday in what is being treated as a terror attack. Residents gathered for a moment of silence Monday as police questioned the suspected lone wolf attacker. (AP Photo/Kirsty Wigglesworth)

LONDON (AP) — The English town of Reading mourned Monday for three people stabbed to death as they sat in a park in what is being treated as a terror attack, gathering for a moment of silence as police questioned the alleged lone attacker.

More than 100 students lit candles and laid flowers in memory of history teacher James Furlong, who was named as one of the victims. At Holt School in nearby Wokingham, where he taught, a flag in the courtyard had been lowered to half-staff.

“He was so passionate and enthusiastic about history and about learning, and anything that was boring, anything you didn’t find interesting, he would make it interesting,″ former student Molly Collins told the BBC. “He would spend time with you, he got to know people individually, and he just always went the extra mile for everyone.”

Furlong’s friend, Joe Ritchie-Bennett, 39, was named by his family in Philadelphia as the second victim. The identity of the third victim has not been released.

The stabbing rampage took place Saturday evening as groups of people relaxed in Forbury Gardens park in Reading, a town of 200,000 people 40 miles (64 kilometers) west of London. A 25-year-old suspect is in custody but officials say the motive for the carnage is unclear.

Police have not identified the suspect, but Britain’s national news agency, Press Association, and other media outlets named the alleged attacker as Khairi Saadallah, a Libyan asylum-seeker living in Reading.

Saadallah had been depressed and received psychological treatment because of the chaos in Libya after the NATO-backed uprising that toppled and then killed dictator Moammar Gadhafi, a family member in Tripoli told The Associated Press.

The relative said Saadallah was born to a wealthy family in the city of Tripoli. He lived in a villa and went to private schools in Libya. Though he supported Gadhafi's ouster, he became disillusioned with the chaotic aftermath.

The relative, who spoke on condition of anonymity because she hopes to return to the U.K., said Saadallah had lived in Britain since he was 17 and had adopted a western lifestyle, with a girlfriend and tattoos.

The BBC reported that Saadallah was investigated by British security services last year over concerns he planned to travel abroad to join a jihadi group, but that he was not determined to be a major threat.

Questions were immediately raised about whether he should have been under closer watch. But Mark Rowley, former assistant commissioner for specialist operations in the Metropolitan Police, told the BBC that the task is daunting, given that some 40,000 people have touched the system.

“And in that 40,000 are lots of volatile people who dip in and out of interests in extreme ideology, and to spot one of those who is going to go from a casual interest into a determined attacker, which can happen in a matter of days, is the most wicked problem that the services face,” he said.

Police have two weeks to question the suspect without charge because he was arrested under the Terrorism Act.

Police warned the people of Reading to expect disruption in the community as the investigation continues.

The Philadelphia Inquirer quoted the father of Ritchie-Bennett as saying his son had moved to England from the U.S. around 15 years ago. His father, Robert Ritchie, said his son worked for a law firm in London before taking a job about 10 years ago at a Dutch pharmaceutical company that had its British headquarters in Reading. He called him an “absolutely fabulous guy,’’ whom he loved with all his heart.

“We’re mourning, and we’re trying to decide what we’re going to do,” he told the Inquirer. “It’s 3,500 miles away. They are still in lockdown over there with the coronavirus, and I don’t know what else to say.”

As news of the deaths seeped out into the community, friends grieved. Martin Cooper, chief executive of LGBT+ charity Reading Pride, said both Furlong and Ritchie-Bennett were great supporters of the community.

“Their loss is a tragedy to so many people,” said Cooper, who often socialized with them. “They should be remembered as extremely friendly gentlemen who were always fun, engaging and a pleasure to be around.”

At the local pub where the victims were regulars, the Blagrave Arms, a note inside the heart-shaped floral tribute read: “Our hearts are broken.”

A moment of silence was held. Before the pause, a friend, Jamie Wake, told reporters the attack was senseless.

“The LGBT+ community and our allies, here in Reading, are close family, and we’re stood here outside the Blagrave, a place we call home, and a safe space for so many members of our community,'' he said. “A place that today we have all been drawn to as we unite together, to mourn as one.”