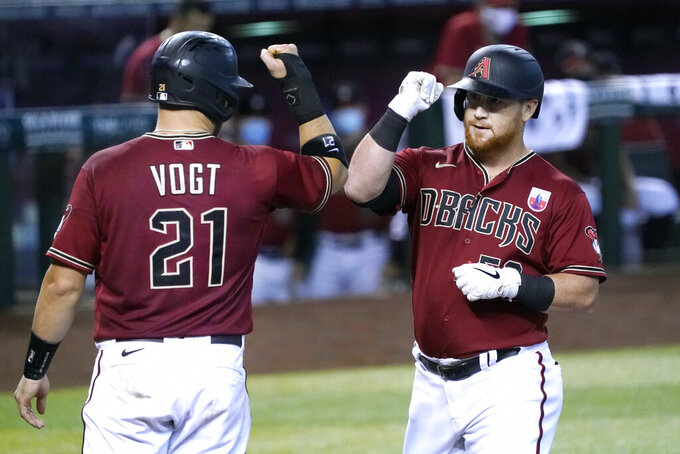 PHOENIX (AP) — It's not a stretch to say that Eduardo Escobar is the most popular man in the Diamondbacks clubhouse. Even when he's struggling at the plate, his infectious smile and constant compliments are essential to the team's vibe.

His long-awaited breakout caused about as raucous a celebration as possible during these COVID-19 times.

Escobar hit a go-ahead, three-run homer in the eighth inning to push the Arizona Diamondbacks past the San Diego Padres 5-4 on Sunday and complete the three-game sweep. Even before Escobar's ball cleared the right-field wall, the D-backs' screams were echoing off the walls of an empty Chase Field.

It's safe to assume some social distancing guidelines were violated for a few seconds.

“When he hit that ball, we went nuts,” Arizona pitcher Robbie Ray said. “Nobody deserves it more. Nobody works harder than that guy."

The 31-year-old Escobar had been struggling this season, batting just .167 with one homer after hitting a career-high 35 homers in 2019. But he connected for a huge hit off Emilio Pagán (0-1), launching a line drive into the right field seats and pumping his first as he rounded first base. It capped a three-hit day for the third baseman.

“Eduardo is the heartbeat of this team, he’s one of the leaders,” Arizona manager Torey Lovullo said. “He is so engaged and caring and loving to everybody he comes across. So to see him struggle and get down, everybody is hurting with the grind he’s going through.

“So when he has these bits and pieces of success, he’s an easy guy to celebrate with.”

The Diamondbacks have won four straight games and improved to 11-11, which is their first time at .500 since opening day. Archie Bradley pitched a scoreless ninth for his sixth save of the season and Escobar was the unquestioned hero.

“Everybody here supports every other player,” Escobar said. “These guys pushed me a lot.”

Arizona's comeback spoiled a solid start for San Diego's Garrett Richards, who pitched seven innings and gave up two runs. It continued an impressive 2020 for the 32-year-old Richards, who missed most of last season while rehabbing from Tommy John surgery. He gave up six hits and struck out two.

“It’s frustrating, especially with how good Garrett threw the ball," San Diego manager Jayce Tingler said. "We struggled to score runs offensively and then finally were able to take the lead and you feel good going into the eighth there, and it didn’t work out.”

Kole Calhoun gave the D-backs an early 2-0 lead with a two-run homer in the third inning. It was his sixth of the season.

Ray had a no-hitter through five innings even though he struggled with his command. He threw 95 pitches but only 45 were strikes. He walked six batters, hit another, threw two wild pitches and was pulled after walking Fernando Tatis Jr. to start the sixth inning.

Junior Guerra came on in relief and immediately gave up a two-run homer to Eric Hosmer that tied the game at 2-all. The next three batters all hit singles and Josh Naylor's blooper into short center field pushed the Padres ahead 3-2. Guerra hadn't given up a run all season through nine appearances until Sunday.

Taylor Clarke (1-0) got the win after giving up one unearned run in two innings.

This was the 10th and final meeting of the regular season between the two NL West rivals. The teams split the series 5-5.

Ray struck out Jorge Mateo in the third inning for his 1,000 career strikeout. The 28-year-old is the second fastest left-hander since 1913 to reach the mark, needing just 810 innings. The fastest was reliever Billy Wagner, who reached 1,000 strikeouts in 757 2/3 innings.

Padres: Tommy Pham was back in the lineup Sunday as the DH one day after leaving Saturday's game with cramping in both calves. But he had to exit again in the ninth inning for an unspecified injury with two strikes and two outs. Greg Garcia pinch hit but struck out looking. ... OF Wil Myers was not in the lineup after leaving Saturday's game with back tightness.

Diamondbacks: Arizona placed RHP Jeremy Beasley on the 10-day injured list because of a right shoulder strain. Beasley made his MLB debut on Aug. 11 against the Rockies. The D-backs called up RHP Joel Payamps to take his place on the roster. Payamps pitched in two games for Arizona last season.

Diamondbacks: Arizona hosts Oakland for a two-game series to end its five-game homestand. The Diamondbacks will have RHP Zac Gallen (0-0, 2.74) on the mound.