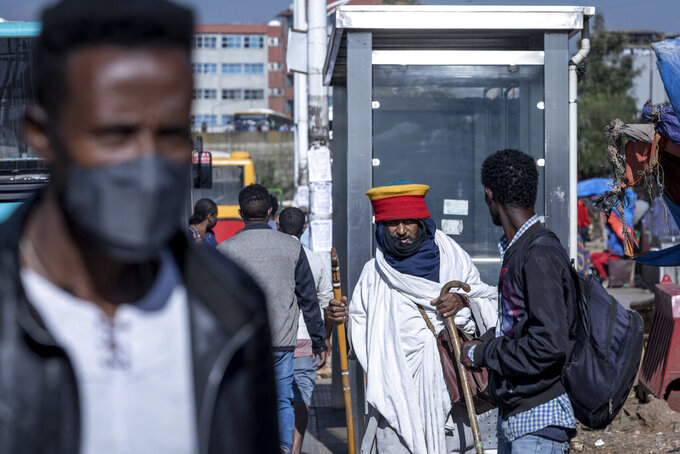 Passengers walk through a bus station in the capital Addis Ababa, Ethiopia Friday, Nov. 6, 2020. Ethiopia's prime minister says airstrikes have been carried out against the forces of the country's Tigray region, asserting that the strikes in multiple locations "completely destroyed rockets and other heavy weapons." (AP Photo/Mulugeta Ayene)

NAIROBI, Kenya (AP) — Ethiopia's prime minister on Friday said his government has carried out airstrikes against the forces of the country's well-armed Tigray region, asserting that strikes in multiple locations “completely destroyed rockets and other heavy weapons" and made a retaliatory attack impossible.

Abiy Ahmed's evening announcement marked another escalation in clashes this week that experts say could slide one of Africa’s most powerful and populous countries into civil war. The conflict pits former allies in the nation's ruling coalition, with the federal government and regional government now regarding each other as illegal.

There was no mention of casualties in what Abiy called the “first round of operation" against the region's government, the Tigray People’s Liberation Front. He said the air force destroyed heavy weapons in Tigray's capital, Mekele, and surrounding areas, alleging the TPLF “has the desire to use them.”

The operation will continue, Abiy said, “until the junta is made accountable by law.” And he warned the Tigray population: ”In order to avoid unexpected peril, I advise that you limit group movements in cities."

There was no immediate response from the Tigray government, while the region is increasingly boxed in by movement restrictions and a six-month state of emergency imposed by the federal government.

The military operation launched early Wednesday after Abiy accused the Tigray government of a deadly attack on a military base. He asserted Friday that months of trying to resolve differences with the regional government have failed. Now, he said, the operation has “clear, limited and achievable objectives: to restore the rule of law and the constitutional order.”

And with that, the prime minister appeared to close the door on dialogue, which some experts and diplomats say is desperately needed.

The prime minister, who won the Nobel Peace Prize last year for his sweeping political reforms, now faces his greatest test. The TPLF, which dominated Ethiopia’s government before he took office in 2018, has felt marginalized by the shifts in power and defied the federal government in September by holding a controversial local election.

The northern Tigray region is now increasingly cut off. Ethiopia's civil aviation authority said airports in Mekele and the regional cities of Shire, Axum and Humera were closed. In Sudan, the acting governor of Kassla province said its border with northern Ethiopia has closed "until further notice” due to the tensions, the Sudan News Agency reported.

Experts say civil war would be catastrophic and destabilizing for the Horn of Africa. The United Nations said Secretary-General Antonio Guterres has spoken with the chair of the African Union, which is based in Ethiopia, and Sudanese Prime Minister Abdalla Hamdok in his role as current head of the regional bloc.

Aid groups warn a humanitarian disaster is in the making if fighting continues, with the COVID-19 pandemic one of several crises.

Communications remained almost completely cut off in Tigray. They disappeared around the time that Abiy made his early Wednesday announcement.

The attack on a military base was “the last straw,” Abiy said Friday.

Ethiopia’s army has said it was deploying troops from around the country to Tigray,. The Tigray leader has said “we are ready to be martyrs.” Casualties have been reported on both sides.

It remained challenging to verify either side’s version of events.

At least one fighter jet flew overhead but there was no confirmation it dropped bombs, a source in Ethiopia told The Associated Press, speaking on condition of anonymity because they were not authorized to speak to the media about the issue. Thursday saw heavy fighting and shelling, the source said, and roads to Tigray were closed.

The federal government said Friday that public meetings in Tigray and moving in groups of more than four people are not allowed, and no one aside from law enforcement can bear arms.

The federal police asserted that its members guarding 22 locations throughout Tigray had came under attack from TPLF forces in recent days.

The U.N. human rights chief, Michelle Bachelet, urged Ethiopia's federal government to restore internet and phone services, saying that “cutting off communication has severely hampered the ability to monitor the situation on the ground, particularly the impact of the clashes in the local population.”

But some word began to emerge. On Friday, the International Rescue Committee received its first message from colleagues in Tigray.

“There aren't active hostilities under way in the areas where we're working,” said George Readings, who leads the group's global crisis analysis. But “we know the situation is pretty tense."

Some 90,000 people in Tigray receive IRC services, and he worried how conflict would affect “so many people already so vulnerable.”

Tigray receives refugees from Eritrea — Readings could not say whether that border was open — and the region has been hit hard by a locust outbreak. “I should mention there has been flooding as well,” he said. “It's a really delicate situation.”

The IRC's Tigray operations have fuel available for the next month. “Then, there is a real question,” if travel remains restricted and fighting continues, Readings said.

It was not clear what, if any, powerful backers Tigray might have now.

Tigray borders Eritrea, which fought a years-long war with Ethiopia before the two countries made peace in 2018. The Tigray government and Eritrea don't get along, and the TPLF this week accused Eritrea of teaming up with Ethiopia's federal government to target it.

Eritrea's information ministry said Friday that “the immediate cause of the current conflict is TPLF’s reckless and multi-pronged attack this week on contingents of the Ethiopian armed forces – the Northern Command – deployed in the Tigray region for decades.”